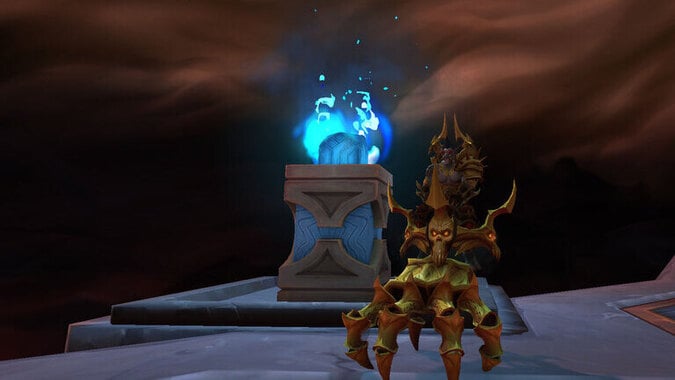 If you’re anything like me when you saw the pictures of the new mounts coming in patch 9.1 from BlizzConline one of them stood out to you. I of course mean the Infinite Pirate Dragon, but since that’s not actually a mount (yet) the next best thing was a giant severed hand with a saddle sticking out of the wrist. It was just such a unique mount that I knew I had to have one. I was initially worried that it would be the Mythic-only mount from Sylvanas, as it was a pretty unique model and historically the Mythic-only mounts have been standouts. We’ve had eyeball jellyfish, water elementals, the tortured souls of Draenei fused together into a slavering horror that’s as likely to drive you insane as it is to get you from point a to b — things like that. So when I realized that there was not one, but four different hand mounts to get from the Maw and Korthia I was very happy.

So how do you get your hands on one of these unique mounts? Let’s take a look.

It’s that fourth one, the Hand of Nilganihmaht that we’re looking at today, because it’s the simplest to get, and can mostly be acquired solo. This shiny golden hand is obtained by collecting five rings of power that have been hidden around the Maw. Simply gather all five rings and find the chained Hand of Nilganihmaht inside the Rift and you’ll be riding in style.

You’ll be able to get four of the Nilganihmaht rings at any time. However, Nilganihmaht’s Stone Ring is only available during a Necrolord Assault in the Maw, so if the current Maw assault isn’t Necrolord you’ll have to wait until it comes around again.

Now let’s talk about where to get all five rings. 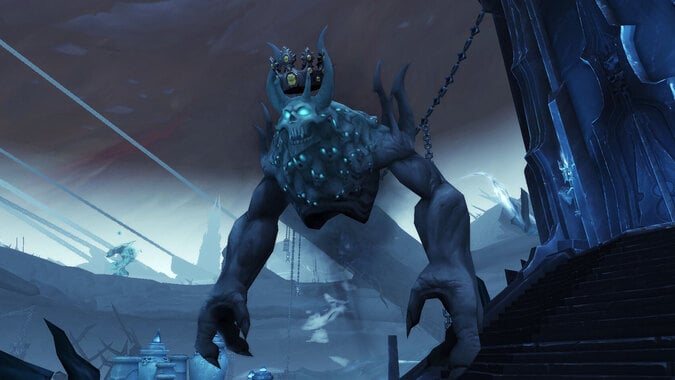 For this ring, you’ll need to be able to get into the Rift phase of the Maw. The ring is a 100% drop from a rare at the northern end of the Maw named Torglluun the Lord of Shades, located at 28.67, 25.04. He’s not the hardest-hitting rare in the world and only has roughly 230k health, so he’s fairly average when it comes to the Korthia and Maw rares. If that’s something that you don’t normally do by yourself you can always wait for a friend to come to help you. You’ll both need to use a Repaired Riftkey in Korthia or use a Collapsing Riftstone right at the rare’s location in the regular phase of the Maw. You can get Collapsing Riftstones from the Zovaal’s Vault daily in the Rift. 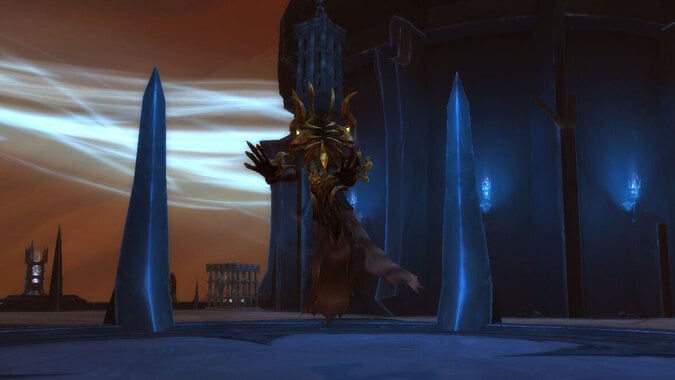 To get this ring you’ll need to kill Exos, Herald of Domination. This is another 100% drop, so getting him to spawn is the tricky part. To spawn him you’ll need someone with the Domination’s Calling item, which you assemble from pieces you collect from three other rares in the Maw — Talaporas, Herald of Pain, Apholeias, Herald of Loss, and Ekphoras, Herald of Grief. Each of those rares requires four people to activate by standing on the four corners of their platforms and using the extra action button provided.

If you don’t want to go to the trouble of making your own Domination’s Calling, you can ask a friend who already has theirs. All that matters is that it’s used to summon Exos — you don’t actually need the summoning item yourself. If you can line your visit up with the Necrolord assault on Perdition Hold then you’ll also be able to use Draka’s Battlehorn to summon some extra help from the Necrolord forces in the area.

Break out your climbing shoes for this ring, because you’ll need to get to the highest point in the Maw. Start by heading to coordinates 18.6, 39.0 and climb up the giant mountain there. Demon Hunters will of course have the easiest time with this because of their double jumps, but they aren’t necessary. Good old-fashioned running and jumping is all you need to get to the top of the mountain where the Gold Band is just sitting out for any enterprising climber to take. Of course, if you want to cheat just a little, Warlock Gateways, Warrior Heroic Leap, Venthyr Door of Shadows, or Borr’Geth’s Fiery Brimstone and a Goblin Glider are all good ways of getting up ledges a little easier. 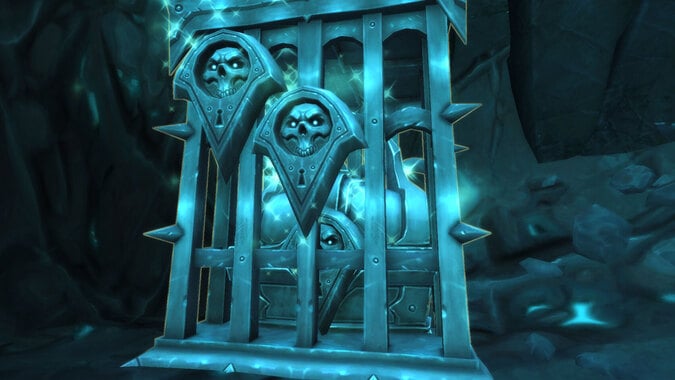 It’s time to open a locked chest in the Desmotaeron area of the Maw. You’ll need to find four different Seal Breaker Keys to unlock the cage and the chest that contains the Silver Ring. The order of these keys isn’t important, and they’ll drop from their sources no matter if they’re the first or last key that you’re getting.

Once you’ve gotten all four keys, the Domination Sealed Chest you’ll need to open is located at coordinates 66.1, 57.5. 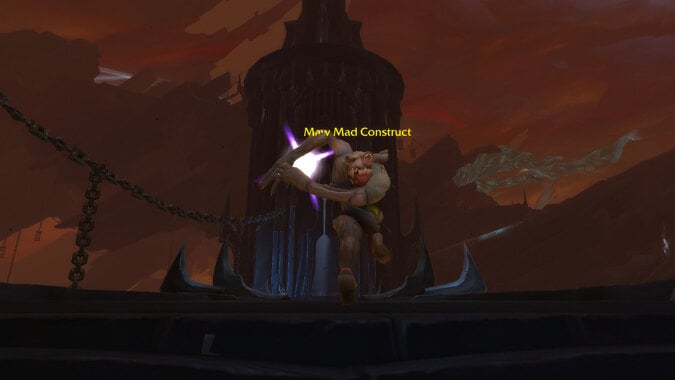 This is the ring that is only available from the Necrolord Assault when the quest Putting a Plan Together is available. You’ll need the Kyrian Construct that you assemble during that quest to collect some of the pieces of the Stone ring. So if the Necrolord assault isn’t currently up, go and get the other four rings and then wait for the assault to change over.

Once you have the four quarters of the ring, take them to any Soul Forge in Zovaal’s Cauldron and you’ll be able to melt them back together. 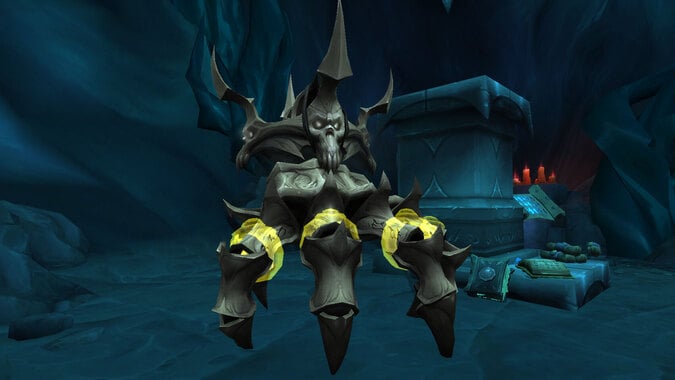 Now that you’ve found the five rings necessary to unbind Nilganihmaht from his prison it’s time to actually find him. You’ll need to make another trip into the Maw for this last step. Nilganihmaht is located in the Rift phase of the same cave where we met Jaina all the way back in the introductory quests of Shadowlands, at coordinates 25.7, 32.5. Place each of the rings on his fingers and he’ll give you the quest Gotta Hand it to Ya, which rewards the Nilganihmaht Control Ring. If you’re interested in more lore about the beings that these hands came from he’s also got a book next to him with their full story — the moral of which is don’t mess with the Jailer. Good thing we’re not doing that!

The final step is to go show off your brand new mount. You’ve worked hard to combine those five rings and unlock your new handy method of transportation. Go get some high-fives from everyone!