The Hearthstone team has finally unveiled more information the upcoming Mercenaries game mode. This mode has been teased for months now, and we’ve had a lot of very basic questions, such as “what even is this thing all about?” We initially thought it would be a deck-building roguelike, similar to Slay the Spire, or perhaps an expanded version of Hearthstone’s existing Dungeon Runs.

It turns out that Mercenaries is similar to both but isn’t quite either — instead, it takes card game style play we already enjoy in Hearthstone and completely removes traditional cards and decks from the equation. You’ll recruit Mercenaries, level them up, give them equipment, upgrade abilities, build teams, and do quests through randomly generated dungeons. It’s basically an RPG built on top of Hearthstone gameplay mechanics.

I have to admit that we still have quite a lot of basic questions, but we do understand the game mode a bit better. So get ready and sharpen your axes, for we’re about to relay all the info we got today. 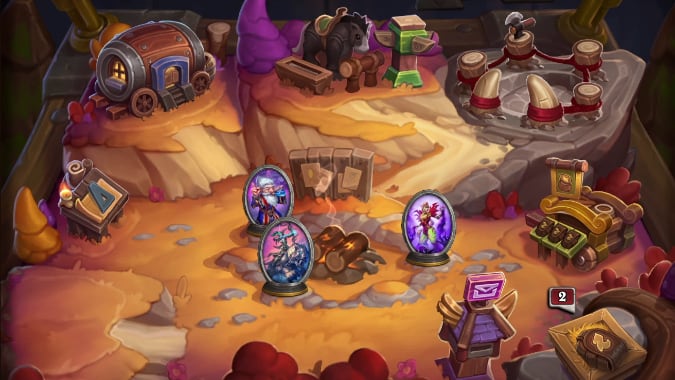 The short answer is: we don’t exactly know yet. Today’s presentation showed snippets of gameplay, but didn’t include a full match being played, so it’s still a little hard to elucidate exactly how it works. The mode is officially described as “combining RPG and roguelike elements,” and we can certainly see that already.

The RPG feel of the mode is strongest outside of combat, which takes place in a village that you can upgrade to access more perks. Here you can give your Mercenaries equipment, improve their abilities, and configure new teams to tackle your next mission. It’s also where you can take on bounties (PVE missions), engage in some PVP in the fighting pit, manage your collection, and more.

You’ll collect a team of mercenaries — each team you build has six mercenaries, but only three can be on the board at any time — all of whom you can level up and equip with gear. And practically everything can be upgraded, including abilities, gear, and the village itself. 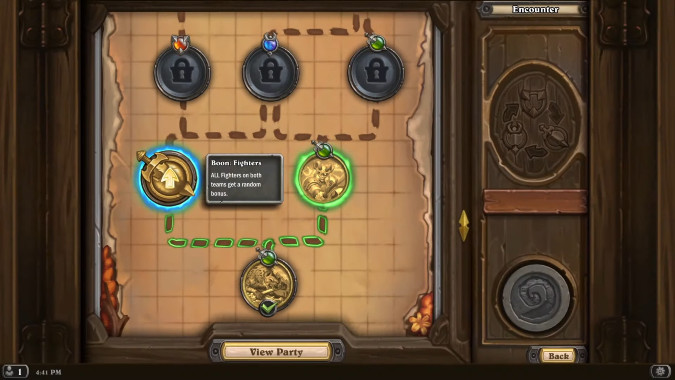 When you select a new bounty, your six-mercenary team will progress through a randomly generated map. There will be multiple paths through, and you can pick your own optimal path by choosing which type of “room” you want to move into next. Some rooms may have easier encounters with simpler rewards, while others might contain “elite” encounters, which are harder, but offer better rewards. Other rooms might allow you to heal your party, or get some other sort of surprise.

This type of map system should be very familiar to players of games like Slay the Spire, among so many other roguelikes.

Another crucial roguelike element we see here is the ability to pick between random rewards to strengthen your team. As you progress, you’ll earn Treasures, which could be stat boosts, passive boosts, or even new abilities for your mercenaries. These will last for the remainder of that run — similarly to the Dungeon Run mode.

As a reward, all of your mercenaries will earn experience, and you could pick up new gear along the way — all of which will help your team do better in your next run. 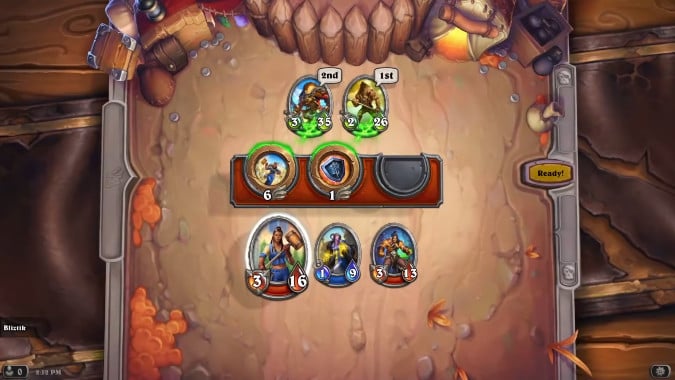 Combat in Mercenaries is all about strategy

Combat is a minion vs. minion affair similar to Battlegrounds. Much like that other game mode, there are no cards to be played; you set up the board and then all the action comes from the mercenaries themselves, each with their specific abilities and attacks. You will only command three Mercenaries at a time, but you’ll have three more sitting on the bench, ready to jump into the action if one of your current team is defeated.

You’ll quickly notice that each mercenary is like a regular Hearthstone minion, with attack and health values displayed on the bottom corners. But you’ll also notice that their health levels are pretty high in comparison — which is a good thing, because the game ends when all of the mercenaries on one of the sides are defeated, and their health pool doesn’t reset between matches. There is no player health to whittle down here: it’s all about killing the minions on the board. This leads us to believe that this will be very brawling-oriented, with a high degree of combat tactics between those clashing minions over several turns.

Each minion comes in one of three types:

Before each battle begins, you have a Command phase where you can determine who attacks whom and who uses which abilities. Each of your mercenaries have specific abilities, with more that unlock as they level up. Abilities have a specific speed, which will determine the order in which they will resolve during combat, and the most powerful abilities can also have cooldowns, preventing them from being used too many times in succession.

Whew. There is certainly a lot to digest here, and it’s difficult to really paint a clearer picture without getting our hands on the game mode itself. But hopefully you’ll have a clearer vision of what to expect from Mercenaries mode!

Hearthstone is jumping into other Blizzard IPs

Mercenaries is bringing Diablo into Hearthstone! The Lord of Terror himself will be a playable Mercenary on this game mode — in what could potentially open the gates (of hell) for us to see even more crossovers in the future.

It’s too soon to tell if this means an actual change in direction for what franchises Hearthstone draws from. Is it still just from Warcraft, or will it become fair game for them to pull from any Blizzard franchise? We did already have an Elemental called Rakanishu in Hearthstone — the same name as a famous demon from the Diablo series. But since they weren’t even the same character, it felt more like a reference, or homage, than an actual crossover.

This, on the other hand? It’s a full-fledged crossover. It’s the actual Diablo as a playable character within the Hearthstone universe. I have to say that this sets up a very interesting precedent, and I’m excited to see if more will come from it! 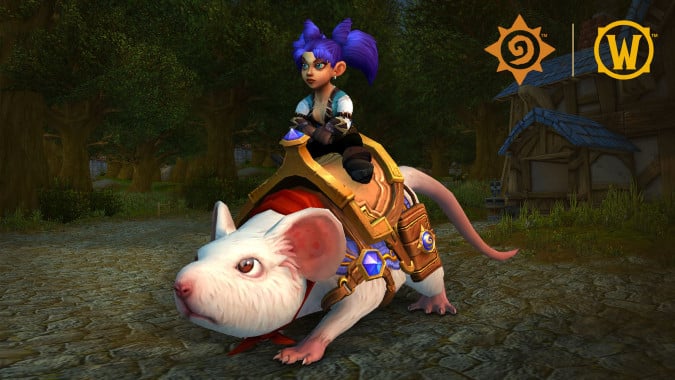 You will be able to earn a World of Warcraft mount

There’s a new Hearthsteed in town, of the rodent kind! Blizzard has decided to, once again, create some cross-promotional content between Hearthstone and World of Warcraft.

First and foremost, you’ll be able to earn this adorable little guy, Sarge, as a mount usable by your WoW characters: all you’ll have to do is to start up a new Bounty after the introductory missions in Mercenaries, once the mode is out.

Secondly, WoW players who are currently set up with a 6-month subscription, or who decide to set one up between now and October 19 will earn the following Hearthstone goodies:

These are stated to be distributed “across your subscription period,” which is to be expected — since you wouldn’t be able to get packs now from a future expansion yet, of course.

Mercenaries, this brand-new way to play Hearthstone, releases on October 12, and we can’t wait to learn even more. In the mean time, besides watching the presentation, you can read one of the three blogs they put out: a general impressions one, another one about the village — your central hub of operations on this game mode — and a final one that is more centered around gameplay.

Blizzard Watch is made possible by people like you.
Please consider supporting our Patreon!
Filed Under: Hearthstone Mercenaries, Mercenaries
Advertisement