How would you improve the Darkmoon Faire? 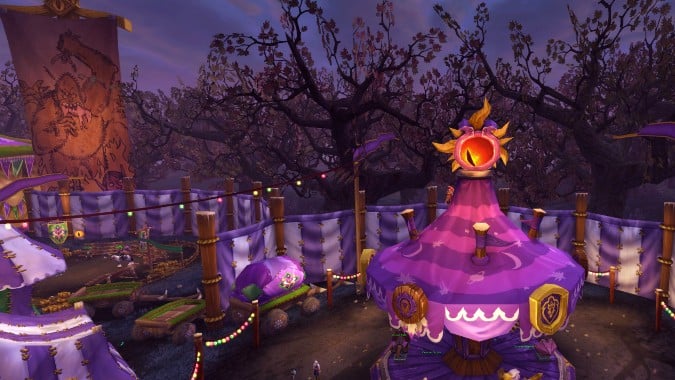 It’s been a while since we’ve seen any changes or improvements to the Darkmoon Faire, World of Warcraft’s monthly week-long carnival of spook and wonder. Most of us only go there for the 10% XP and reputation buff, if we’re being honest — when was the last time you looked forward to actually playing the games at the place? At most, we might kill one of the bosses in there — Moonfang, or the Death Metal Knight, or the elusive Darkmoon Rabbit — but those aren’t exactly “carnival” activities per se. Killing bosses is just… good old WoW.

When you look at other games, MMORPG or not, it’s easy to see how the Darkmoon Faire has the potential to be so much more. Final Fantasy XIV hosts the Gold Saucer, an enormous casino full of games and activities, much like the Darkmoon Faire — but it’s permanent. You don’t need to wait for a specific week on every month in order to go there. And it has lots of cosmetic prizes a player might want to play the games in order to collect, ranging from hairstyles that your character can use, to mounts, and pets.

It’s true that the Darkmoon Faire has its rewards as well — both transmog and pets. But those haven’t been updated in so long! Wouldn’t it be nice if our carnival of doom got constantly updated with new things to collect — new transmog looks, new pets, new mounts — and we could access the place at any time in order to play the games and work toward those goals? It wouldn’t be much different from a system like the Brawler’s Guild — and also, of what many players would love for the Mage Tower (which is returning to the game in patch 9.1.5) to be.

Besides the content side of things, we can also look at the fantasy and lore aspects of the Darkmoon Faire. There is so much untapped potential for this creepy island full of creepy creepiness. Imagine if the Madness at the Darkmoon Faire expansion pack from Hearthstone wasn’t confined only to the card game! What if, in WoW, it turned out that Silas Darkmoon was, in fact, hiding horrible, horrible things, and there was some sort of Old God organism underneath the Darkmoon Island? What if that organism had been slumbering, but something was making it rumble in its sleep, and launch the occasional wave of dread across the island — and the only way to ensure that terror wouldn’t spread even further would be by playing games and partaking in joy and fun in order to keep the creature dormant?!

…it doesn’t have to be that — Blizzard has far better writers than me, of course. Still: what would you like to see done to the Darkmoon Faire? More games? More rewards? Have it open all the time (but restrict the XP/rep buff to one week a month like it is now)? Story content? Let us know everything!

Blizzard Watch is made possible by people like you.
Please consider supporting our Patreon!
Filed Under: Darkmoon-faire, Madness At The Darkmoon Faire
Advertisement