I’m a transmog junkie, and I love farming for older looks I missed for various reasons from I didn’t run that content when it was current to the blasted thing just refuses to drop and so, World of Warcraft patch 9.1.5 is a bit of a delight for me, with several nerfs to Legion raids and the debut of solo queues for Island Expeditions.

If you’re wondering how to go about running said Expeditions on your lonesome, it’s fairly simple. However, if you never ran Island Expeditions, it’s a bit of a treasure hunt in Boralus or Dazar’alor to find the NPC you’re going to need.

For the Horde, in Dazar’alor you can find Captain Rez’okun down near the harbor. He’ll be standing next to a big map table, but while you could use that map table to queue up for Island Expeditions in BFA, if you want to solo queue, you have to talk to the Captain himself and select the Private Tour option. There are three — Private Tour, Private Tour (Heroic), and Private Tour (Mythic).

In Boralus, Alliance have it much the same, except you need to find Flynn Fairwind instead. He will also be standing next to a map table, and he offers you the same three options as Captain Rez’okun. Pick the option you’re looking for, and after a short wait you’ll be spawned into an Island Expedition all by yourself. 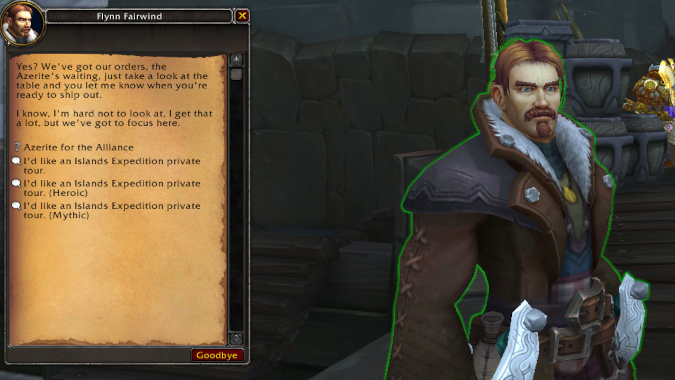 If you’ve run an Island Expedition before, the gameplay really hasn’t changed for the solo incarnation. You run around the island by yourself instead of with a couple of friends — that’s the only real difference. Your goal is still to collect more Azerite than the enemy faction squad you’ll be encountering by killing mobs and doing one-off special events. When they attack you, it’ll just be you up against all of them, which may make them a bit trickier to contend with than the group version. I haven’t tried either Heroic or Mythic difficulty yet, but on Normal it wasn’t very hard — just a lot of running around killing the most high value targets I could find for maximum Azerite and blowing up the Horde NPC team to thwart their efforts, since I was playing Alliance in my test run.

In terms of rewards, there are a lot of them — there are mounts, pets, and various items that can be used in transmog for you to farm. Sadly, you can’t directly target what expedition you get when you solo queue — you get spawned into a random Island Expedition each time. But you can collect the Seafarer’s Doubloons that drop from the end of the expedition reward chest as well as from random mobs on the islands and use them to buy Salvage crates from specific islands, giving you some ability to target a specific mount or pet or drop you’re looking for. The salvage experts rotate as well, so if the one selling the items you’re interested in isn’t up, hold on to your doubloons until they are.

So that’s basically it — Find Captain Rez’okun in Dazar’alor or Flynn Fairwind in Boralus, queue up, run around getting Azerite and killing anything that tries to stop you, and hopefully you’ll get the items you’re looking for. Have fun storming the beaches all by yourself.