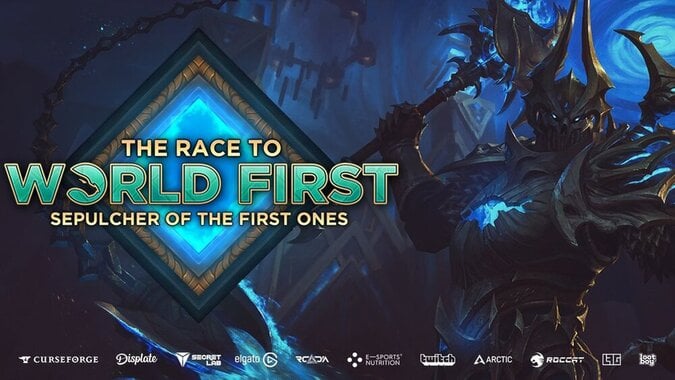 The Sepulcher of the First Ones Race to World First raid starts when the doors to Mythic difficulty are thrown wide open on Tuesday, March 8 for North American guilds and Wednesday, March 9 for the EU. If you’re looking to follow along with all of the action you’ll have a wide selection of streams to help you follow all of the action.

All of these guilds have been hard at work in the Sepulcher trying to get their hands on as much tier gear as possible. They’ve been paying bounties to people who are able to trade items to their raiders, and the amounts are getting truly ludicrous. For example, BDGG is offering four million and one gold for any heroic tier that can be traded. While Echo is offering 10 million(!) for just a piece of normal tier from Ryegelon or Zovaal.

Months of preparation has come down to this.#TeamEcho & @bigdumbgaming step into Sepulcher of the First Ones in the Race to World First. ⚔️

The Race is on.

The winner of the last race, EU guild Echo is going to be sharing their stream with NA guild BDGG. This will let them have 24/7 content up during the race.

Echo is likely the front runner again, as they looked extremely strong in Sanctum. It was pretty much their race to lose from the moment they got past Painsmith. However, despite Echo’s strength, BDGG is the one I’m most interested to see this time out. They’ve consistently improved their performance over the last few races, and I feel like they have a shot to get a top-three spot this time.

Team Liquid presents Race to World First: Sepulcher of the First Ones

Formerly Complexity-Limit, the newly named NA guild Team Liquid are ready to settle the score with Echo. They’ve got a tough fight ahead of them to take the top spot back. However, they have managed to strike the first blow, by killing Heroic Anduin first before Echo was able to. Thankfully, Blizzard has since nerfed the encounter a little to make it a little easier on us mere mortals. Of course you’ll be able to watch their main Twitch stream for their extremely well-produced event — but tuning into their raid leader Maximum’s stream is often the right call. You get to watch as he helps lead them to victory, and get to hear him strategizing on the fly, it’s super cool.

Get ready to have some fun on our Twitch channel during the RWF. With our hosts live from Berlin, the good time is guaranteed. 🕺💃

Team Liquid aren’t the only ones getting a new partner — EU guild Pieces have joined with a German esports company SK to form SK Pieces. They’re hosting an event live from Berlin with both on-site and off-site casters providing commentary. You’ll be able to watch on their Twitch stream. They took third place in the Sanctum of Domination race, and are likely going keep the pressure high on Liquid and Echo.

Are you ready to face the Jailer? WE ARE! 👊

The guild have been growing in strength throughout Shadowlands to show you what they've got in the Sepulcher of the First Ones.

Catch us live for the #RWF on March 9th. You won't be disappointed. 😏

EU guild Method has been steadily rebuilding after their implosion. They were the seventh guild in the world to defeat Sire Denathrius, and managed to get Sylvanas fifth. Will they continue to raise higher in the rankings, or are SK Pieces and BDGG just too good now? We’ll find out once their stream goes live.

One thing that is good to see is that they’re continuing their longstanding tradition of partnering with a charity. This RWF they’ll be working alongside Safe In Our World to help raise money for mental health. To date, Method has raised over $100,000 dollars for worthy causes, and I’m glad to see that continuing.

It’s not just Method though — all of the top guilds are doing what they can to help raise money for worthy causes.

German guild Aversion will be streaming their own event in German. They were the sixth place guild from Sanctum of Domination and have proven to be fierce competitors. Raider.io has an amazing interview and spotlight on them that shows just how much work has gone into getting to this place for the guild.

We’ll keep you updated over the course of the race as guilds race to complete the raid, and more top contenders emerge. I can’t wait to find out which boss will be the first big roadblock.