Shadowlands Season 4 will include affixes for raiding, Mythic+ dungeons from multiple expansions 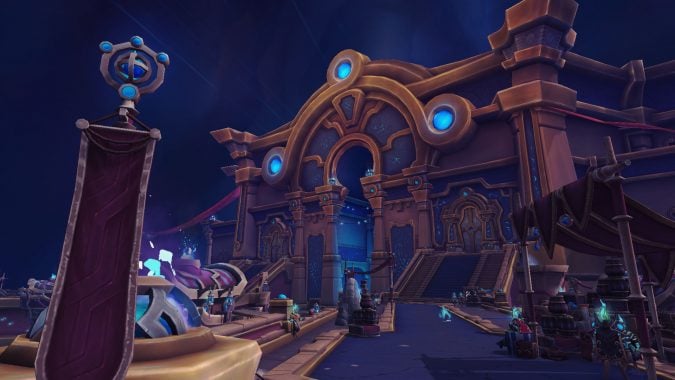 The announcement of Shadowlands getting a Season 4 is a fascinating attempt to provide players with something new in that period after all the content has been released, but before we get the next expansion. It’s not a surprise that we’re getting a new PVP season, even if the Eternal Gladiator is pretty cool — it would have been odd for Season 3 to either drag on forever or to end abruptly with nothing to follow it. I’m happy it’s happening, but I’m not surprised by it.

What I am surprised by is the list of changes and additions to PVE content, specifically Mythic+ dungeons and raids. One of these changes is something I’m honestly surprised we haven’t gotten before now — the addition of affixes to older raids to make them relevant at the end of the expansion.

We’re excited to announce that we’re going to shake things up in Mythic+ and raiding in Season 4. We’d like to change up the Mythic+ dungeon pool so that it would include 8 dungeons that span the last four expansions of WoW:

To that end, we’ve started a community poll where you’ll help us decide which two Draenor dungeons are included in the Season 4 Mythic+ rotation. You can click here to vote to select two dungeons from among: Auchindoun, Bloodmaul Slag Mines, Everbloom, Grimrail Depot, Shadowmoon Burial Grounds, Skyreach, and Upper Blackrock Spire.

For Season 4 raiding, we’re imagining adding a progenitor-themed affix system to infuse some new mechanical twists into Castle Nathria, Sanctum of Domination, and Sepulcher of the First Ones. Our intention here would be to make all three raids relevant in Season 4, with increased difficulty and more powerful levels of raid loot dropping throughout all of them.

I’m certainly hopeful that we’re not looking at another period of over a year between patch 9.2 and the next expansion, but however long it takes, this attempt to transparently offer us things that extend the shelf life of Shadowlands while we wait is a really good idea. Making affixes for raiding that bring Castle Nathria and Sanctum of Domination back into relevance while we’re waiting, and make those raids offer gear that would be useful and attractive? This is a positive step, and one I’d like to actually see in the future for raids in every expansion. Perhaps it could even replace Timewalking, or be worked into the TW rotation so that when an expansion comes up the TW raid becomes relevant as well and worth pursuing again. More options in content are a good thing when we’re waiting for the next expansion.

Similarly, the idea of adding more Mythic+ dungeons from previous expansions reminds me of what they did with Legion Timewalking — making those older Mythic+ dungeons relevant again — and with the Mage Tower returning for all players to access full time, it only makes sense to look back for more of these older dungeons. Adding the mega-dungeons from the last three expansions is a good idea — those are experiences that really should be given more life in Mythic+ in my opinion — and I’d personally like to see Auchindoun and Upper Blackrock Spire make the cut. You can vote for the Warlords of Draenor dungeons you’d like to see, just as an FYI, not saying you should vote for those two dungeons but you totally should.

There’s always a bit of a lull after the last patch of a World of Warcraft expansion drops. Sometimes, this lull lasts long enough that we call it a content drought, and they can be a problem. If you’ve been playing for a while, you might remember the notoriously long period after Siege of Orgrimmar dropped, when we were basically just waiting for the next expansion. Similarly, Warlords of Draenor ended up with months spent in the fel corrupted version of Tanaan Jungle gearing up alts, and we saw Argus take the role of final content for months at the end of Legion. I’m hopeful that this shift in focus to providing ways to extend content shelf life in the post-content phase of an expansion will continue and be iterated on in the future. I’d really like to see whatever the next expansion turns out to be designed with the idea that older raid content could be extended via affixes, for example.

It’s a great idea and one I am surprised didn’t happen sooner.

Blizzard Watch is made possible by people like you.
Please consider supporting our Patreon!
Filed Under: Battle For Azeroth, Legion, Shadowlands, Shadowlands Season 4, Warlords Of Draenor
Advertisement