Echo gets the World First kill of the Jailer! 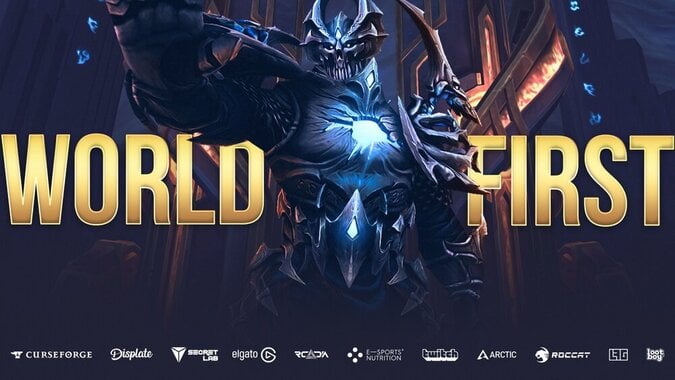 Echo has once again finished first in the Race to World First by killing the Mythic Jailer after 277 pulls!

After 18 and a half grueling days of full-time raiding Echo managed to put an end to the Jailer’s nefarious plans once and for all. They played the last section of the Sepulcher super well, racking up World First kills on Rygelon and the Lords of Dread before getting the Jailer down first. They were able to plan and change their comps faster to execute new strategies on these bosses that just left Team Liquid in their dust. Not by that much, as Liquid got their kills usually only a few hours later but just enough.

Echo is the only guild in the world to have seen the new Mythic phase on the Jailer, and not only did they reach it first but they learned it first and executed it flawlessly for their kill. They figured out that even though the Jailer gets a big heal as he starts the phase through Diverted Life Shield, that heal is affected by abilities that reduce healing — like a Warrior’s Mortal Strike. Using that knocked off a huge amount of the health that the Jailer was going to steal from Azeroth. After clearing that they just had to deal with the two new mechanics and a few returning ones from earlier phases and the fight was all sewn up.

The Sepulcher of the First Ones Race wound up lasting roughly 12 hours longer than the previous longest Race to World First: in Tomb of Sargeras with Kil’Jaeden. While the Jailer didn’t come close to requiring the 645 pulls that Kil’Jaeden did, the whole event still took close to three weeks. Guilds like BDGG already had to cut their hours back to more reasonable nighttime only raiding, and we saw raiders run out of time off and have to drop out of the race entirely — Liquid had to swap tanks as one of theirs went back to work. Team Liquid were clearly feeling the pressure as they had made the decision to end their in-person race today and fly home to resume racing on Monday. All of these raiders put an unfathomable amount of effort into these races, and to keep that up for three weeks is just not something that you can do — and still be enjoying yourself.

Echo are now back-to-back World First champions and will probably keep that title until the next expansion. Unless we see some smaller event for the newly-announced Season 4 of Shadowlands that will see all three of the Shadowlands raids become relevant again via a new affix — we don’t know what that’ll be yet, but it’s expected to be similar to a Mythic+ affix.

Until then though, Blizzard Watch offers a hearty congratulations to them for a race well run!!