The Queue: It’s Splatoon x Pokémon week in Splatsville and I’m all in on #TeamGrass 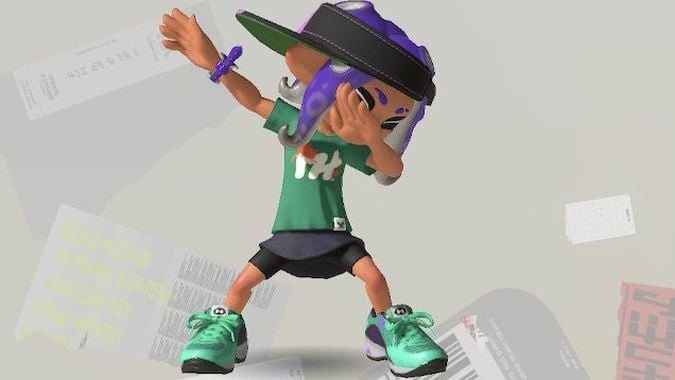 Yes, it’s that time again: SPLATFEST TIME! I’m so happy these are back, and even though I have a bit of travel plans this weekend, I’m still going to make sure to find time to get to Ruler. While you debate which team is the best team, what’s say we have ourselves…

ARTHONOS KICKS US OFF WITH THE OBLIGATORY:

Which team are you backing in the next Splatfest?

NGL, I was worried that Shiver would end up on #TeamWater and I’d have to choose between the least-appealing Scarlet/Violet starter or not joining Shiver’s team. Thankfully, Shiver is repping #TeamGrass, which also happens to have the best starter, Sprigatito.

Note: I almost never actually pick Grass starters in Pokémon games. But that darn cat has me good (Fire is a close second, though).

CORY TAKES US BACK IN TIME MANY YEARS:

Was there ever a moment where you were choosing between Spriest and something else as what to make your main/build your WoW persona around? What was the other option if so?

I don’t know if the goal was ever to build a WoW persona around a character — that sort of just happened naturally as I came to love Shadow more and more.

As for the crux of the question: There are actually two very notable moments! My first character was actually a Warlock, and that’s the character I raided on for most of vanilla. But at some point, like many guilds back then, we needed more healers. Our GM was a Priest, and I’d always liked the idea of melting faces in PVP, so I decided I’d level a Priest and keep it around for when we needed extra heals. I don’t entirely remember the specific series of events that followed, but I ended up sticking with my Priest as my main through the end of vanilla (and obviously beyond).

Several months later, we come to that second notable moment: This time, Karazhan was the catalyst for the decision. You see, we had myself and another Warlock-turned-Priest both planning to be on the same team, but we needed one of us to go Shadow. I may be misremembering, but I vaguely remember talking over in Vent and discussing with the other Priest what we each wanted to do. He kinda leaned healing anyhow, and I was interested in playing Shadow in raids, so it never really came to anything beyond a mutual agreement!

That Priest ended up switching to Shaman in Wrath, but we’re still playing together after all this time — he’s our Mythic+ healer, in fact, Cory!

KALCHEUS IS LOOKING FOR THE BEST DEALS ANYWHERE:

Q4tQ With Black Friday sales starting Soon™, are there any games you’re watching to get at bargain prices?

Honestly, nah. I have too many games already and not enough time to play them all. In general, Black Friday is something that I mostly avoid, unless I know I need a very specific thing (like a new laptop or TV or something), in which case, I save up a bit beforehand and try to snipe deals the day-of. But I’ve only done that maybe once or twice?

And to be clear, I avoid it because I am very much the retail therapy type and know it’s better for my wallet all around if I just turn away and don’t look at the deals. (Except LEGO deals. Always give in to LEGO deals.)

Q4tQ: Do you think Nozdormu falls to madness because of events in Dragonflight?

I am admittedly behind on some of the new story drops, but regardless, I’ll say that Murozond should definitely be in this expansion one way or another. If there’s a time for him to “appear,” it’s now. And with the heavy emphasis on Nozdormu right out the gate? I think there’s something a-brewin’ there.

Now, madness specifically? I don’t think it’s going to be that easy — at least I hope it isn’t! I would like there to be a slightly more clever twist on his story than one we’ve seen, quite frankly, a lot.

Q4tQ: Ok, I read that in order to get drops from Twitch you need to have ‘drops’ enabled. Is this true for the viewer, or am I confused and it’s the streamer that needs it enabled?

I won’t steal too much thunder from Kalcheus, who has kindly put together a more detailed guide on this sort of thing, but put simply: The streamer needs to enable drops, not the viewer!

ENO GIVES ME A GOOD’UN:

QftQ: What talent in your main class spec’s trees best describes you?

I mean, it’s hard not to go with the obvious: Idol of Yogg-Saron. That said, there are a few others that, if maybe not entirely apt, are still very fun descriptors…

…Shadow certainly has a vibe, huh?

LEFTY GETS A BIT OF DISAPPOINTMENT:

What is your favorite pokemon of every type?

I’ll be honest, I really wanted to answer this, but it wasn’t until I started going through the lists that I realized just how overwhelmingly large the selection of Pokémon has gotten over the years. Without pictures to compare, it all just kind blends together as random letters.

So uhhh… I will try to get back to you on this one, but if anyone can find an easy “Pokémon sorted by type” picture, I’d be very happy. In the meantime, I love Chandelure, Mimikyu, Dratini, that glowing fairy mushroom ‘mon, Pumpkaboo, uhh… yeah, okay, that’s mostly Ghost types.

What was your favorite thing about Shadowlands?

I don’t mean this as negatively as it probably sounds, but I honestly think I’ll look back on Shadowlands as the expansion that made me realize it’s okay if WoW isn’t my “main” game all the time. WoW went on the back burner for most of Shadowlands, and that allowed me to experience an entirely new genre of game (Soulsborne-style) that quickly became one of my favorites. I’ve gotten a much better experience with modern games in the last couple years than I ever had before. I’m really happy I was able to dedicate more time to more games, and I am genuinely grateful Shadowlands — through a number of circumstances — was the expansion that led me there.

But to answer more directly: Probably Theotar. (All of Maldraxxus/Necrolords were genuinely a huge hit with me as well.)

That’s our Queue for the day! I hope y’all have a great one, and big thanks to Rossi for making my life a bit easier with a Queue swap. Please be sure to leave lots of questions so they don’t regret it ;P

Blizzard Watch is made possible by people like you.
Please consider supporting our Patreon!
Filed Under: Splatfest, Splatfests, Splatoon, Splatoon 3
Advertisement