Inarius, Lilith, and all of the story hints in the newest Diablo 4 trailer 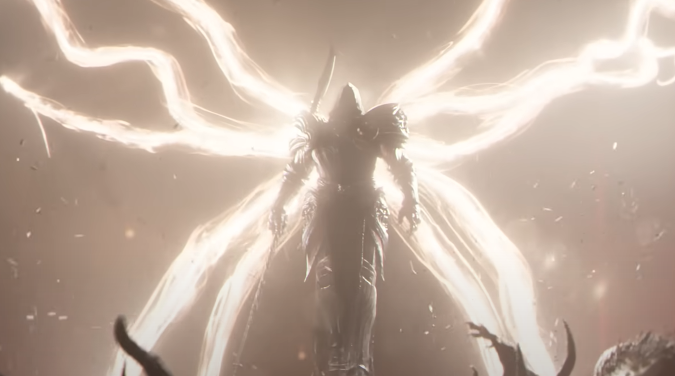 The angel Inarius and the demon Lilith both appear in the latest Diablo 4 trailer, but the two have a complicated history. It spans the creation of Sanctuary, the creation of the Nephalem and their Human descendants, and the endless Eternal Conflict. Without Inarius and Lilith, the world of Sanctuary may have never come into being, the Eternal Conflict would have continued in its endless stalemate, and the world of Diablo would be completely different.

The latest Diablo 4 trailer gives us our first look at Lilith and Inarius together… and it doesn’t look like a friendly reunion. So what exactly happened between Lilith, the daughter of the Prime Evil Mephisto, and Inarius, the Archangel who rebelled and walked away from the endless war?

Let’s dig into their history and examine the tantalizing hints we can tease from this trailer.

Inarius, Lilith, and the creation of Sanctuary and the Nephalem

Before you can understand exactly what happened in this Diablo 4 trailer, we need to cover some backstory. These unlikely cohorts met in battle as both fought in the Eternal Conflict that raged between Angels and Demons. Inarius was originally a true believer in the Eternal Conflict, just like the other Archanges. But eventually he came to feel that the whole thing was pointless — by definition an “eternal” conflict never ends, and neither side could win or lose. From Inarius’ perspective, there was no point to fighting it at all. He tried to convince his brother Tyrael of this, but neither Tyrael nor any of the other members of the Angiris Council saw things this way.

As the war continued, Inarius was ambushed by a host of demons… but being completely fed up with the conflict, he started ranting about how pointless it all was. The daughter of Mephisto — and a very powerful demon in her own right — found Inarius intriguing, because she too believed that the Eternal Conflict was pointless. She protected him from the Demonic Host, and suggested they find others who believed as they did.

And there were others. Inarius and Lilith gathered their followers and led a full scale rebellion against both Heaven and Hell. They stole the Eye of Anu (which would later become known as the Worldstone). a magical remnant of the time before Creation which had  the ability to make worlds. With it, they created Sanctuary, a place where all of them could hide from the Eternal Conflict and live in peace.

Then came the Nephalem: the children of Angels and Demons. The first was Linarian (later known as Rathma), Lilith and Inarius’ son. But these Nephalem carried the power of creation itself in their veins — they were potentially more power than Angels and Demons alike. The other rebels became uneasy over this, and Lilith destroyed them all to protect her children, and all the new Nephalem… because the creation of these astonishingly powerful beings was the entire reason she broke away from Hell in the first place.

Lilith didn’t want to hide from the Eternal Conflict — she wanted to win it, and the Nephalem were her solution. Inarius was incensed that Lilith lied to him and killed his followers, and so he used the Worldstone to banish her from existence. Then he used the Worldstone to alter Sanctuary itself: when the Nephalem had children of their own, they would be born human, without the divine power of the primordial Anu in their veins.

But if you played later Diablo games, you know this didn’t stick. In Diablo 2, Tyrael destroyed the Worldstone to prevent Baal from gaining its power, and by the time of Diablo 3 a new generation of Nephalem had been born.


Who are Inarius’ followers?

In the trailer we see an army of what appears to be Zakarum Paladins — or some other members of the Zakarum faith, with the symbol of Zakarum on their shields — marching into Hell with Inarius. And that’s interesting, because working with mortals is something we’ve seen Inarius do before.

After banishing Lilith, Inarius wandered Sanctuary disguised as a mortal, and saw Diablo, Mephisto, and Baal invading Sanctuary by posing as peaceful gods. Under the guise of a religion called the Triune, they presented themselves as gods who preached love, courage, and creativity instead of hate, terror, and destruction. This would become the Sin War, in which both Angels and Demons invaded Sanctuary, and the conflict between Inarius and Lilith continued. In order to oppose the Triune, Inarius created the Cathedral of Light, a religion very much like what the Zakarum faith would become when it was founded much later. The conflict eventually ended with the Angels and Demons agreeing to an armistice in which neither would touch Sanctuary… but it didn’t work out in Inarius’ favor. The Triune and the Cathedral of Light were both destroyed, and Inarius was left to Mephisto as punishment, presumably to be tortured in Hell for eternity.

By the time we get to this trailer, it’s clear that Inarius has escaped his imprisonment, but now he’s returning to Hell at the head of this Zakarum army. Just which Zakarum worshipers would be willing to follow Inarius into Hell itself?

It’s possible they’re the long lost Hand of Zakarum. These Paladins saw the corruption of the Zakarum faith — due to Mephisto’s manipulation — and seemingly left to pursue their own agenda, much as the Templars did. If they’re the ones following Inarius now, how did he convince them to accompany him  the first place? The visuals in the trailer make it clear that he serves as both a general and a patron to their ranks, using his power to aid them in battle. But why is Inarius in Hell pursuing Lilith?

Or is he pursuing Lilith? He calls her name and throws a spear in her direction, saying “I have returned to hell for you.” But we don’t see the spear’s impact — and we don’t know if Inarius was actually aiming for her.


Inarius and Lilith have returned to Hell… but why?

The Diablo 4 announcement trailer set this story into motion with Lilith’s return: in it, she’s summoned back to Sanctuary by someone who might be her son Linarian (Rathma). But when Lilith and Inarius fought during the Sin War Linarian opposed Lilith… though he wasn’t particularly on his father’s side, either. In the latest trailer, we see Lilith back in Hell , but we don’t know how or why.

And this leads us to wonder: how did Inarius get out of Hell in the first place? Did he escape when Mephisto, Baal, and Diablo were banished to Sanctuary during the Dark Exile? Whenever or however he was freed, he didn’t return to the Heavens… and if he’s been on Sanctuary this whole time, what has he been up to?

It’s possible we can look to the Zakarum faith for answers. It was created by the Prophet Akarat, based on teachings from an otherwise unknown Archangel named Yaerius. This Angel told Akarat to create a church around the tenants of resisting all things evil and embracing the Light. Nobody knows who Yaerius was, just like nobody knows the Angel who placed Diablo 3’s Enchantress Eirena and her sisters in a magical slumber around the same time. And now we see Inarius with an army of Zakarum invading Hell.

Did Inarius spend his time after his escape founding the Zakarum and creating other agents on Sanctuary? And is that perhaps why Mephisto, his former captor, took such special care to corrupt the Zakarum faith in the first place?

This trailer raises a host of questions, but gives us few answers — though there’s plenty to speculate about.  I’m very interested to see how it all plays out.

Blizzard Watch is made possible by people like you.
Please consider supporting our Patreon!
Filed Under: Diablo 4, Inarius, Lilith, Rathma-Linarian, The Sin War
Advertisement