The Queue: What will the Fox say? 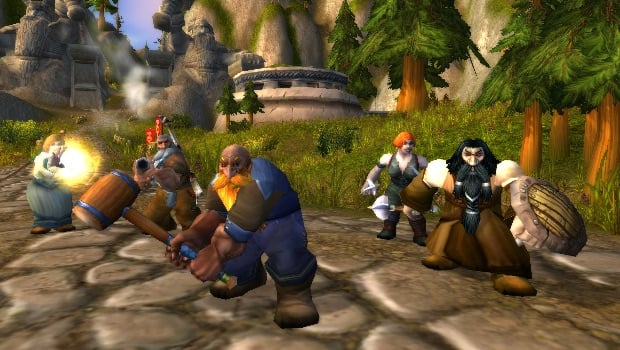 Welcome back to The Queue, where I am your host while Adam is out of town this week. Today we have a surprising number of questions about a certain Mr. Fox Van Allen, and since we’d hate to make you wait, let’s get right to answering them.

Fox is back!? Had he written anything for BW because we all need a lot of Fox in our lives.

More than one of you asked this question, but I’m answering the first one I saw. I have good news and I have bad news for fans of Mr. Van Allen. While Fox is returning to stream with us once a week, right now he isn’t slated to write for us. However, we can’t say what the future may hold… maybe fate will conspire to bring him back to us.

(Please read that last sentence in whichever evil villain voice is your favorite.)

With the current selection of classes topping the polls for our Twitch WoW play-through, dwarf is actually the only race we could all play together. However, we haven’t rolled characters yet and so we haven’t decided if we’ll do all one race or do a mix of races and meet up in a starting zone.

Our YouTube channel is a work in progress. We only recently created it to archive our video streams for people who can’t watch them live, which is more important now that we’re doing more streaming. For those who aren’t aware, our podcast is live on Monday evening, we’re starting a WoW play-through on Thursday afternoons (and, reminder, you can vote on what we play), and Matticus streams Hearthstone on Friday evenings. Because we think these are great fun, we want everyone to see them even if they can’t tune in live.

If you want to check out our shows even if you can’t make the live recording, head over to YouTube and subscribe!

Why is it that most of the chairs in inns are not functional? Also, the ones you can sit in generally face you in awkward directions. Anyone else notice this?

Inns really aren’t all that inviting, are they? Next expansion I say we demand comfy couches (the better for podcasting from).

In reality, however, I’d guess that these details — especially fixing them in the old world — are low priority. Warlords zones have a lot of detail to them (including things like seating arrangements). Just look at the way people in your garrison come and go, occasionally sitting around tables eat or play Hearthstone — this wasn’t something you’d see in vanilla-era WoW. We’ll probably continue to see attention paid to little things like this as the game moves forward, but it seems unlikely Blizzard will go back and spruce up existing inns… and we’d probably rather have them building new gameplay than rearranging chairs.

But, still: comfy couches. Blizzard, you can make this happen. We have faith in you.

Latest word on how many patches there will be in WoD? Are we holding to 2 raid tiers, which implies 1 more patch?

We’re already at 6.1, so if Warlords follows previous models, we have at least two content patches left… and possibly three. I don’t think anyone’s holding out for the madness of a 12-patch expansion like we saw back in the day. Blizzard has talked in the past about getting expansions out more quickly — and, conceivably, with fewer patches per expansion (and hopefully less waiting time than we had at the end of Mists). However, they’ve been talking about this for a while and failed spectacularly in doing so from Mists to Warlords.

Will we see a shorter patch cycle and a quicker expansion this time around? Though it seems clear that’s what Blizzard wants, it’s hard to say what will actually happen — and they’ve made no official announcement one way or the other on how many raid tiers we’ll see in Warlords. My money’s on a raid layout much like we saw in Mists, but hopefully with less empty space to fill at the end.

To find out what the future will actually hold, though, we’re going to need to build one heck of a scrying circle.

Or we’ll just have to wait to see what Blizzard does. That seems more likely.

what does the “z” stand for when I see diablo class builds for “zdps”? Why is it different from any other builds than tanking?

zDPS is short for “zero DPS,” and is a fairly extreme tanking build that boosts survivability by dropping damage output to nothing. There are a few zDPS builds floating around, including monk, crusader, and witch doctor, but monk builds seem the most common in this category. These can be great group builds, but they won’t get you far solo. Sure, nothing can kill you, but you can’t kill it, either.

That’s it for today’s Queue. As always, leave your comments and questions below and we’ll be back with more answers tomorrow!