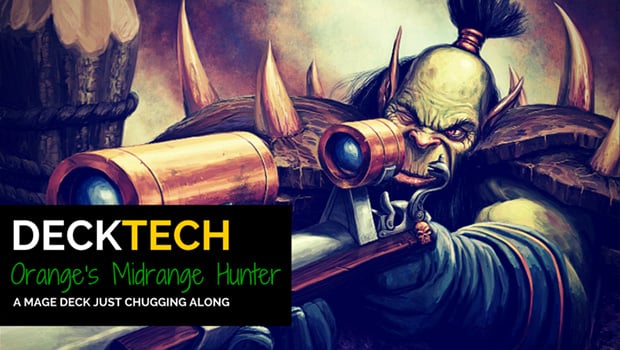 This week, we’re going to check out the midrange hunter deck in Hearthstone. It’s a popular deck not unlike its younger and more aggressive brother, the face hunter. This is actually my main deck of choice when I was in the midst of climbing the ladder. Your deck relies heavily on efficient trading and board domination while your hero power has the capacity to provide constant pressure to your opponent later on in the game. The hunter player cannot afford to be passive and reactive. They need to secure the board and there’s plenty of methods to do that. The list we’ll examine belongs to the recent IEM Katowice 2015 champion Orange himself!

Again to emphasize, your main goals are to aim for board control and not go for the face.

Yes, as a hunter.

In most cases, you can discard Dr. Boom, Savannah Highmane, and other reasonably expensive cards back into your library. You also want to pass on your traps so that they can be fished out later. Holding onto your Mad Scientist, Haunted Creepers, and Eaglehorn Bows are almost never a bad idea. For specific mulligan tips on class matchups, scroll down to the bottom. Try to pitch away your Webspinners because you need them later on in the game to activate your Kill Command. (Exception: Playing against face hunter, you’ll want them to fend off your opponent’s minions.)

Much of the early game will be spent here developing your board and defending against their minions while you eventually set up for your bomb drops (like Dr. Boom and Savannah Highmanes). One mistake that I frequently make is eagerly dropping Knife Juggler on turn 2 only to despair when it subsequently gets a Frostbolt to the face when my opponent is up. Your best bet is to hold the Juggler for the middle or late game where it has an opportunity to change the game in your favor.

When you’re playing an Eaglehorn Bow, you want to use it against existing threats on the board to further increase your board position. Try to refrain from going to your opponent’s face no matter how tempting it may be.

Hunter’s Marks and Kill Commands should be held back on reserve to eliminate key cards from your opponent. But if their health is low enough, that Kill Command can be used right on their face.

Defender of Argus plays really well with your hounds and your snakes if you need additional defense (or offense). Alternatively, you can save it to help buff your bigger minions at the end game.

Board control continues to remain a priority. You’re better playing a Piloted Shredder on turn 4 instead of a trap and a hero power. Continue trading efficiently here.

Now you get to deploy your Savannah Highmanes and Dr. Boom onto the field. Start going for the face if there are minimal to no threats on the board. You’re at a stage of the game where you can continually apply pressure to your opponent with your hero power. If Dr. Boom gets eliminated, Ragnaros can easily step in.

I once dropped a Freezing Trap on turn 10 and my opponent’s Ysera attacked right into it effectively removing it from the game since it increased Ysera’s mana cost to 11. 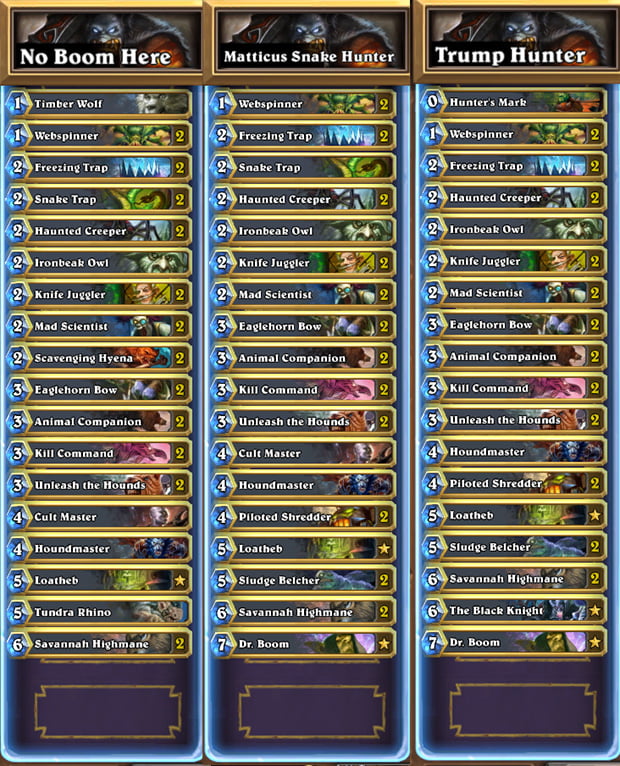 Midrange Hunter made an appearance last week at IEM Katowice and was a deck piloted by the eventual champion, Orange. Famed streamer Trump himself played a variation last month and went from being outside the top 100 to 3rd place at one point.

I played a few matches where I added the Hyena and it works extremely well with your snake and hound minions. It has the capability of exploding into another huge threat on the board that your opponent has to deal with. I ultimately cut the card because I felt it didn’t add that much more to the deck. Having one Defender of Argus is an additional tweak I’ve encountered some hunters on the ladders use to help stave off the rush from other aggressive decks. A single Stampeding Kodo is another possible tech card you can add as it provides an easy tempo swing in your favor if your opponent is running smaller minions at that stage of the game. King Krush and Ragnaros are your alternatives (or additions) to Dr. Boom.

The inclusion of a Cult Master is a peculiar choice but if you stop and think about it, it makes sense. Between Unleash the Hounds and the snake tokens from triggered Snake Traps, the Cult Master provides a great way for you to refill your hand. Just make sure you don’t overdo it and burn cards because you became too greedy. 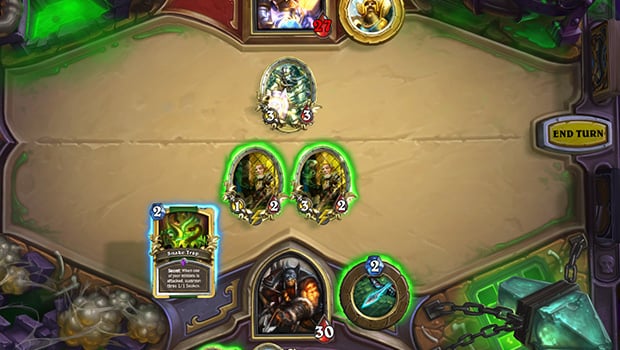 This is what we call the dream. If the knife jugglers get attacked, 6 knives will be thrown. 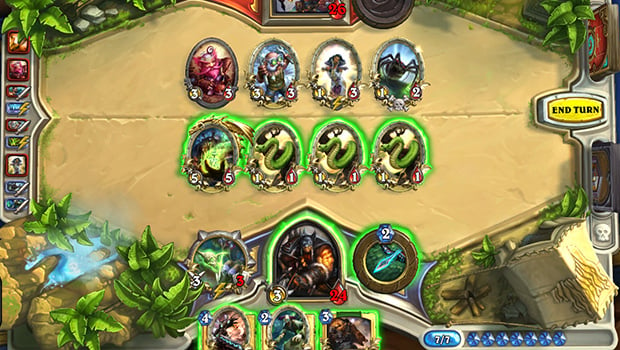 Boy, I sure hope that Animal Companion in my hand ends up being Leokk. (Spoiler: It wasn’t).

Druid: Hunter’s Mark shines in games like this. You’ll want to reserve this for their big trees like Ironbark Protector or Ancient of War if they get played (or the ever annoying Druid of the Claw). Keep a close eye on your life and their mana bars. A Savage Roar combo will close the game if they can get you down early. Save your Loatheb for around turn 8 to deny them that ability.

Hunter: Against Face Hunter, this match will come down to your draw. Unleash the Hounds will help turn the tables so hold it when they have a sizeable board presence. Make sure your hound tokens die on the same turn or else a counter-Unleash the Hounds will absolutely spell the game over for you. A Knife Juggler early on will help you either draw their threats or eliminate many of their 1 health minions when you play yours. If you can hold out long enough, they’ll eventually run out of steam. You’ll want to look for your own Webspinners, Haunted Creepers, Mad Scientists, and Animal Companions here.

Mage: When you encounter Mech Mage, your Eaglehorn Bow will be one of the best ways to remove their Mechwarper from play. Their Snowchugger will give you fits and be outright annoying if they land a hit on you (preventing your weapons from being used). Fireballs will most likely be used against your Highmanes. Their secrets are almost always going to be a Mirror Entity. Play your minions carefully with that in mind. Either play something non-threatening, or have a way to remove it when it triggers. Your Animal Companion actually counts as a spell here, not a minion, so it can squeak by without tripping the secret. Their mech minions are absolutely a priority so as to not activate Goblin Blastmages or Tinkertown Technicians.

Paladin: If they play Muster for Battle, immediately follow up with an Unleash the Hounds to remove their Silver Hands from play so that they won’t get buffed up. Silver Hands have to be targeted because all it takes is one Quartermaster to turn their innocent demeanour into something menacing. The midrange paladin decks aren’t quite as potent as before as players are starting to catch on. Be cautious on the timing of Consecration.

Priest: This is a rough matchup as they’ll have to use their early removal against your minions. So many card components here should be scary. Auchenai Soulpriest and Circle of Healing? Yeowch! Mull and find yourself a Piloted Shredder so that it isn’t in the crosshairs of their Shadow Word: Pain or Shadow Word: Death. Priests will often run the dual Shadow Madness combination so keep that in mind when you play your minions as they will use them against yours. Toss your Haunted Creepers and Mad Scientists. Hold onto that Animal Companion and Eaglehorn Bow (against pesky Northshire Clerics).

Rogue: Oil rogue can give you some trouble here and I haven’t had many strong games against them. Even if you do go one for one against their minions, there’s always the looming chance that your opponent draws into their massive burst cards and demolish you. Your game plan is to suppress their minions and minimize the effectiveness of their Tinker’s Sharpsword Oil. Look for your Animal Companions, Haunted Creepers, and Mad Scientist here. If you have a Loatheb in you opening hand, it isn’t a bad idea to hold onto it.

Shaman: You know, at the time of writing this, I haven’t encountered as many shaman decks as I’d like. The one I saw the most was a Mech Shaman list. Lightning Storm, Hex, and Crackle can ruin your day here. You will lose to a Shaman if their side of the board is left unchecked. Expect an Al’Akir or a Neptulon coming down your way eventually. Your Kill Commands will want to neutralize their Fire Elementals.

Warlock: With Handlock decks, it all boils down to timing. If you lay on the damage too early, you give them the ability to drop their Molten Giants with a Sunfury Protector to taunt them up. Only do this if you have the Kill Commands or the burst to get it done. Against Zoo lock or Demon lock decks, your Unleash the Hounds should be held later on to counteract their Implosion. Your Ironbeak Owl will have a field day here and within the first few turns, you should be able to easily determine what type of warlock deck you’re facing and how best to use your lone owl.

Warrior: The control warrior matchup can be one of the more difficult ones to challenge. Their armor gain from their hero power is a pain to punch through. You can actually afford to mulligan slower here and selecting your Piloted Shredder or Eaglehorn Bow. Just remember that your Dr. Boom probably won’t last a turn because their Big Game Hunter will be ready and waiting for it. Armorsmiths have to be removed with your Eaglehorn Bow or Animal Companion. Careful not to play your Snake Trap if they’re wielding a Death’s Bite.

That’s the deck! Enjoy it and let me know how you fare!

Blizzard Watch is made possible by people like you.
Please consider supporting our Patreon!
Filed Under: Deck List, Midrange-hunter, Orange, Trump
Advertisement