Humans in the Warcraft setting have a very distinct origin — they were created by a curse.

To know the origins of the Humans of Azeroth, we first must learn the the origin of the mysterious Vrykul, and through them, the world of Azeroth itself. The Vrykul were created to help shape the Titans’ creation, and their downfall came from the Old Gods, enemies of the Titans who created the terrible Curse of Flesh to aid in the assimilation of their servants.

And it was the Curse of Flesh that started the path that led to Humankind. 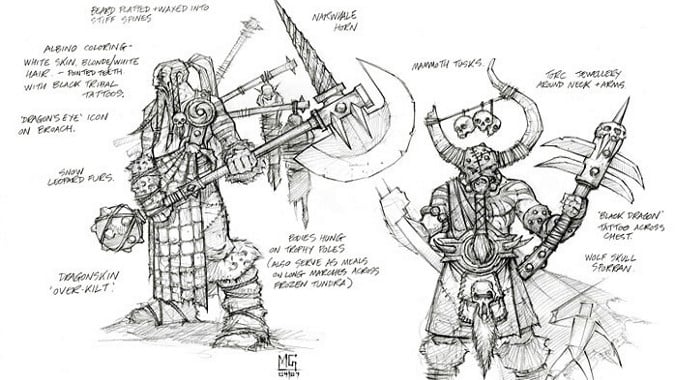 The time before time

According to the Lore Keeper of Norgannon in Uldaman, Azeroth was a unique world and required a unique approach when it came time for the Titans to shape the world. Synthesis matrices were used to create seed races, and many of these seed races (such as the Earthen) were mixed with rock, stone and other materials native to the world of Azeroth. We see this today in many of these races created by the Titans — the Tol’vir, the Mogu, the Earthen, and yes, the Vrykul. But the Earthen and Vrykul we see today in Northrend were a later creation. Much like the Mogu and Tol’vir, the original Earthen and Vrykul succumbed to the Curse of Flesh created by the Old Gods during their war with the Titans over control of the planet. Later, the Prime Designate Loken, first among the Titanic Watchers entrusted with the Ulduar complex, fell to the corruption of the Old Gods and used Ulduar’s creation forges to make Iron Dwarves and Iron Vrykul to serve his will. These, however, are purely Loken’s servitors, and not truly seed races.

But the original Vrykul were one of the seed races created by the Titans in ages past to help with their grand experiment. And they endured in what is now Northrend for untold thousands of years, even after the Curse of Flesh had transformed them from stone to flesh. Their people worshiped their Titanic creators as gods, and adapted to their new forms  — unlike the Mogu, who would turn against the Titanic Watcher Ra-Den and use his knowledge to reverse the Curse of Flesh’s effects — until the coming of Ymiron, who would be a king among their Dragonflayer clan. The Dragonflayers were a mighty people, tamers of proto-drakes which they rode in war (perhaps in imitation of Thorim, the Titanic Watcher who himself had a mighty proto-drake mount, Veranus). 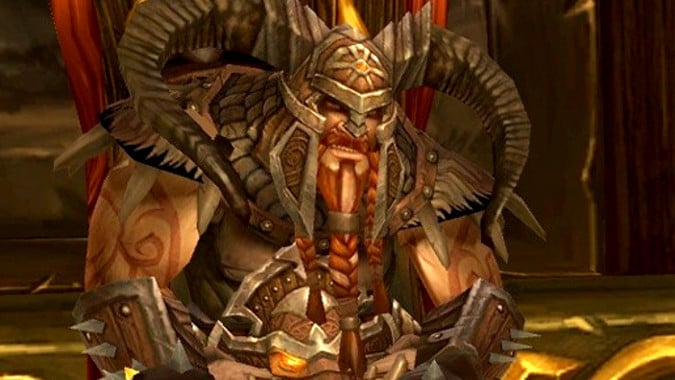 During the reign of Ymiron, the Vrykul began to notice a problem. Their children were being born different — smaller, weaker, and hideous by Vrykul standards. This further manifestation of the Curse of Flesh created by the Old Gods was not understood by the Vrykul, as many years had passed since the age when the Titans made war against the Old Gods and Vrykul society viewed those ancient times as myths, barely understood. So disconnected were these Vrykul from the ones who’d served the Titans directly that they did not even remember that the Old Gods existed — and so, when Ymiron was faced with this seeming calamity against his people he mused on what could possibly be the cause. What force could curse the Vrykul like this? What power could be so great that it could stunt them in this manner?

Ymiron could not conceive of anything as potent as the Titans. Therefore, he decided, it must be the Titans themselves who were cursing them. Much like Li-Shen in Pandaria, Ymiron turned on his gods, but unlike the Thunder King, King Ymiron did not discover one of the Titanic Watchers nor a creation forge such as the Engine of Nalak’sha or Forge of Wills. Instead, Ymiron hit upon a two-pronged plan to deal with the curse ravaging his people. This required him to abandon his race’s allegiance to the Titans, who he saw as responsible for his people’s woes. This he did, cursing the very Titans for allowing or even causing this to befall the Vrykul.

King Ymiron first ordered that the parents of any affected children were to immediately put said children to death. If they failed to comply with this directive, they themselves would be taken to Gjalerbron and there they would be executed. Then the Vrykul who proved the strongest by helping purge these twisted aberrations that dared to be born weak to Ymiron’s people would be placed into enchanted slumber in underground fortresses such as Gjalerbron or the Halls of the Ancestors in Icecrown. This process was so thorough that by the time the ancestors of the Nerubians arrived in Northrend, the Vrykul were gone, leaving behind their citadels such as Utgarde Keep or Jotunheim. 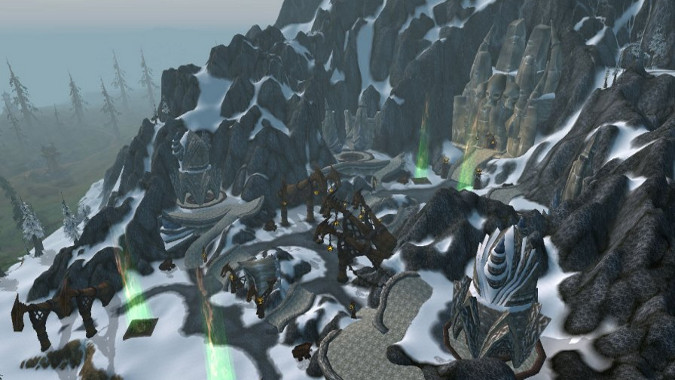 But despite the brutality of Ymiron’s decree, and his attempt to cheat the extinction of his people that purging their offspring would cause, some of the Vrykul could not embrace the destruction of their own children. Yes, they were stunted, barely half the size of a proper Vrykul, and by their standards ghastly and hideous, they were still their children and many parents simply could not kill them. So instead of allowing themselves to be murdered or committing the same act upon their offspring, these Vrykul left what would become Northrend after the Sundering and eventually arrived somewhere on what we now call the Eastern Kingdoms, most likely in modern Arathi. There, a group of these ‘runts’ were raised in secret, far from King Ymiron and his people. In time, as they grew to adulthood, they were given what supplies they could use and left by their Vrykul forebears to fend for themselves.

Thus would the race that would come to dominate most of the Eastern Kingdoms before the Third War come to be — unwanted, cursed outcasts cut off from their parents and their culture, raised on a few myths and legends such as that of Tyr, namesake of modern day Tyr’s Hand and inspiration to these unwanted ones in their darkest hour. Lacking the size of their forebears, they proved hardy and fecund, and their numbers quickly grew to surpass their ancestors, who had been forced to retreat into their magical sleep in a vain attempt to outlast the curse.

While other races fought epic wars against one another, or sundered the entire world, Humanity quietly grew stronger. When the ancient Trolls resumed their war against the High Elves who were the descendants of the Kaldorei who’d caused the Sundering, the Elves grew desperate enough to seek aid from the Humans. They learned that despite their relatively short lifespans that Humans were very gifted with magic (potentially due to their Titanic creation) as well as fearsome warriors, and recruited them as allies in exchange for teaching Humans the gift of arcane magic, as well as swearing an oath to repay the Humans for their aid one day.

This oath would be held by the Lothar clan, descendants of the Human king Thoradin who ruled primitive Arathi in those days. Thus was founded the first true empire in Human history: the nation of Arathor, formed from the disjointed Human clans that then squabbled and fought throughout the Arathi Highlands.

Humanity’s power only grew over time. Even as Arathor fell into separate kingdoms, Humanity gained in might, pushing the Trolls out of much of both the north of the Eastern Kingdoms (the nations of Lordaeron, Gilneas, and Alterac) and the south (the Kingdom of Stormwind) as well as founding the magical Kingdom of Dalaran and the island nation of Kul’Tiras. Together with Strom, the kingdom of the Trollbanes that ruled the Arathi Highlands from the ancient capital city of the Arathor, these made up the Seven Kingdoms of Humanity. Until the coming of the Orcs during the First War, Humanity suffered no major reversals.

Today, while many Humans died in all three of the major wars, and much of their territory in the north of the Eastern Kingdoms is lost to either the Scourge or the Forsaken, the Kingdom of Stormwind (founded by those of the Arathi Bloodline, such as Anduin Lothar, who helped stop the Orcish clans at Blackrock Mountain) endures and controls much of the south. Stormwind’s military power is significant enough to place it at the forefront of the new Alliance, and following the siege of Orgrimmar it’s fair to say that Stormwind and the Humans are an ascending power. But the future remains to be seen, and the coming of the Burning Legion on the Broken Isles may show a darker side to Humans and their Vrykul ancestors.