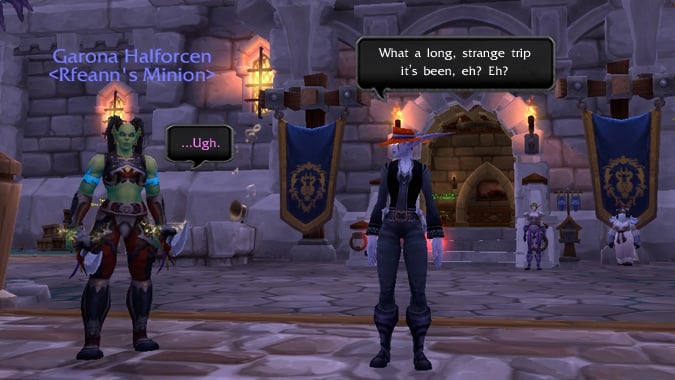 Join me, won’t you, for a whirlwind tour of what I see as some of the greatest successes — and not-so-successes — of WoW Rogue design during this expansion.

If you’ve already forgotten those long, dark years in which our combo points stacked on our targets rather than our Rogues, I don’t blame you — I’ve done my best to bury those memories, too. But sometimes, late at night, when I’m tucked into bed and the moon is casting long, threatening shadows across my room, I remember.

I remember adds on boss fights that would despawn completely when they die, taking all of my precious combo points with them into the Twisting Nether.

I remember Redirect‘s one-minute cooldown, which was timed to be useful maybe one out of every five or six times I actually needed it.

I remember the Glyph of Redirect, which reduced that cooldown to 10 seconds. And I remember thinking to myself, “I have to give up a major glyph spot for this?”

I didn’t really have a horse in the race when it came to the years-long, sometimes-heated debate among players as to whether combo points should stack on targets or on the Rogues themselves. I related to those who argued that, for a class that relied so heavily on its mobility, versatility, and the ability to deal damage, we were forced to live forever with a mechanic that hurt all three characteristics. But I also related to those who argued that combo points stacking on targets forced more careful choices and (potentially) more intelligent gameplay.

On balance, if anything, I was in favor of combo points remaining on our targets. But now that I’m living in this points-on-self, Redirect-free, slow-decay-out-of-combat Combo Point world? I wouldn’t have it any other way.

Now if they could just improve the user interface to match this glorious new reality. 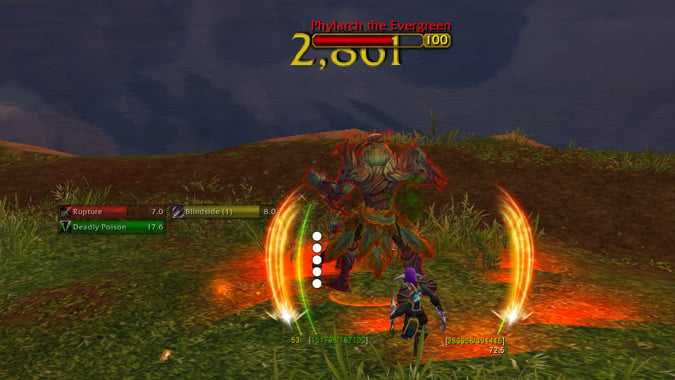 Designing raid set bonuses is a delicate balance: They’re aimed at changing the way we play our Rogues in a manner that makes us feel more powerful. Still, they need to avoid being too strong (for class/spec balance reasons) and they need to avoid feeling too disruptive (because then they don’t feel good, which defeats the purpose).

This expansion, the folks who design our set bonuses managed to hit the sweet spot several times. Our tier 17 set, Poisoner’s Battlegear, featured several interesting, gameplay-changing adjustments that directly addressed player concerns about each spec: The bonuses made Assassination and Combat play faster; trimmed down the wait time between Combat’s major damage cooldowns; and added complexity back into the Subtlety rotation, which had been simplified somewhat for this expansion.

Our tier 18 set, Felblade Armor, brought similar adjustments. The Assassination bonuses helped ensure that Dispatch remained worth using against low-health targets; the Combat bonuses gave us additional, energizing bursts of our key damage cooldown in a way that didn’t feel awkward; and the Subtlety bonuses made Vanish more interesting and worthwhile to use on cooldown, once again ensuring added complexity in the rotation.

The bonuses weren’t perfect. They weren’t all uniformly successful. And some were plagued by bugs. But on the whole, they struck a satisfying balance and felt worthwhile.

Biggest Miss: Death From Above

Earlier this year, I graded each of our level 100 talents on a number of different criteria, including how exciting they seemed before Warlords launched, how cool they looked, how fun they were to use, and how valuable they actually turned out to be in the game.

For those of you who tried out Death From Above, particularly during the first half of the expansion, you know all too well how the ability worked out: It was flashy, it was fun… and, for too much of the expansion, it wasn’t worth selecting.

For designers, the cautionary tale of Death From Above arguably ends with two primary lessons: If it’s buggy, people won’t use it. And if it’s a talent option with lower DPS potential than its competitors, people won’t choose it. By the time the spell’s messes had been largely cleaned up in patch 6.2, the damage to its reputation was done — and it still wasn’t strong enough to warrant using for most specs in most raid situations. 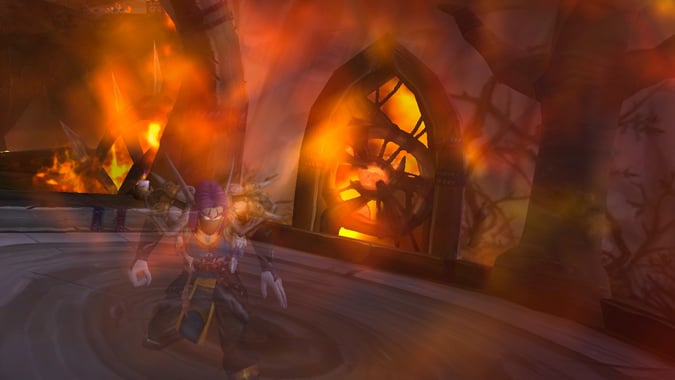 I’ve probably said before that, as far as I’m concerned, the two most iconic, defining aspects that are unique to Rogue gameplay are our use of stealth and our use of poisons. I’ve already written a column on the decline of poisons as an integral part of what it means to play a Rogue, so I won’t belabor the point too much here. But I remain concerned about the gradual degradation of both our poison options and the depth of the poisons we once had.

I get that although Blizzard has been coy thus far about the sorts of changes we’ve got in store for Legion, they’ve also made it clear that we’re likely to see greater differentiation between each of our three specs, and I’m cautiously eager to see what those might be.

At the same time, though, I hope we don’t end up losing sight of the forest by focusing too much on the individual trees. Rogue class uniqueness may be just as important as, if not even more important than, making each Rogue spec more distinct from the other. Poisons have been one of very few class features that behave in a manner that’s entirely original and entirely loyal to many of the themes a person thinks of when they imagine what a Rogue should be.

I hope that whatever the designers have in store for the class in Legion, those plans don’t leave our poisons drying out in the sun. 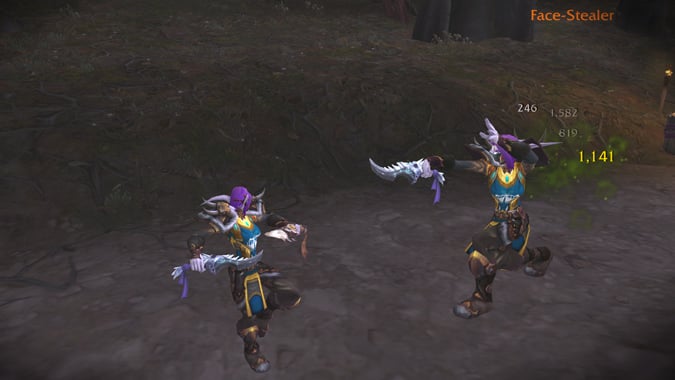 This column wouldn’t be complete if I didn’t at least try to crack open the thick-shelled nut of Combat rogues in Warlords. I’ll be honest: I can’t quite decide whether I think the direction that Combat has taken in this expansion is a good thing or a bad thing.

Sometimes, I start to think pretty strongly that it’s a bad thing for PVE. For any raid fight in which we spend a significant chunk of time with more than one target in range of our weapons, Blade Flurry is so powerful (and so easy to use) that a lot of Rogue players feel they’ve got no choice but to go Combat — and that’s not a fun feeling.

But I also know how badass I feel when I flick that Blade Flurry switch, start killing all of the things, and see that inflated DPS meter at the end of the fight. Then I wonder: Is it necessarily bad for the Rogue class if each spec has a “niche” when it comes to the type of damage it deals best?

Sometimes, I start to think pretty strongly that the story of Combat in PVP this expansion was a low-level tragedy. A unique mixture of factors — a combination of changes to PvP itself and other classes along with a range of changes to Rogues themselves (including, notably, a buff to Combat’s damage in Deep Insight) — left Combat rogues in an enviable position within arena teams (not to mention PVP in general) during the first several months of Warlords.

Eight-second Kidney Shots — that could be used more than once in close succession, thanks to Marked for Death? An unpeelable Killing Spree on a stunned target during a heightened-damage Deep Insight? Combat Rogues had tremendous, controllable burst damage, as well as a hefty arsenal of crowd-control strength. They were overpowered. I just want to type that again, because I’m one of many players I suspect never thought they’d be able to say it with a straight face: Combat Rogues were overpowered in PVP.

So they were nerfed. More than once. Deep Insight wasn’t touched, but Kidney Shot’s PVP duration was. So was Killing Spree, which finally had its crowd-control immunity removed (in both PVP and PVE) for the first time in the game’s history. Combat settled back down to earth in PVP — which was probably entirely appropriate, if a little deflating — and became something slightly less than it was in PVE. (Although enemy NPCs rarely cast crowd-control abilities on a Rogue while Killing Spree is active, it can happen, and it’s frustrating when it does, since it adds one more blade of grass to the haystack of cases in which Killing Spree can be unreliable in PVE.)

It has long felt to me like WoW‘s designers can’t quite make up their minds about what they want the Combat spec’s strength to be. The upcoming spec redesigns will likely write a new chapter in Combat’s long story, and allow designers to decide whether they want Combat to be defined by whatever its gameplay theme (be it the much-rumored pirate or something else) or its DPS-cleave niche — or a little bit of both. They’ll also have to decide how many of these Band-Aid nerfs that were rolled out during the course of the current expansion should remain into the next one. 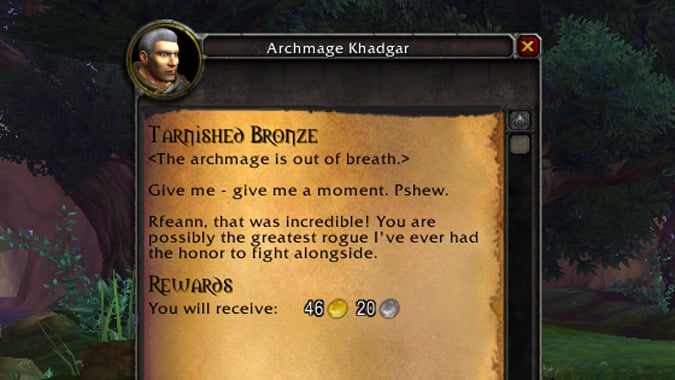 What were your Rogue hits and misses?

But hey, this is all just one guy’s opinions. How has the expansion been for you and your Rogues? Among the changes made to the Rogue class for Warlords, what were the greatest successes from your point of view, and what changes left you feeling unsatisfied at best (or furious at worst)? Did I miss anything important? Let’s chat it up in the comments; be sure to focus on the good at least as much as the bad! It makes for a more enjoyable conversation.