The Queue: Back to the daily grind 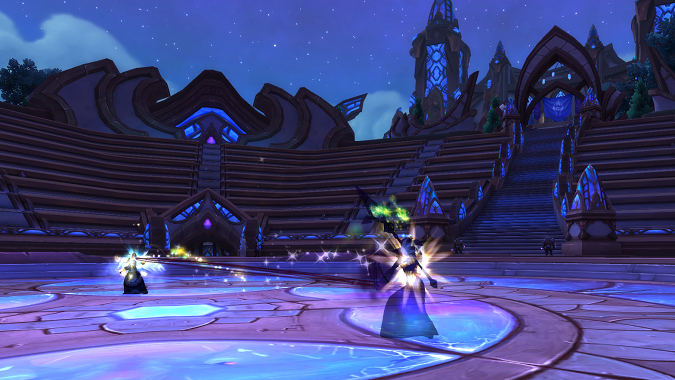 I know some of you were disappointed when I showed up in Tuesday’s Queue without Mitch. So today he makes his triumphant return — and it’s no surprise that we’re just as argumentative as ever. I think that’s just a rule at this point.

Anyway, on to the questions!

Is it better to level your “main” toon and get as much gear as humanly possible first, or work on alts asap?

Mitch: Don’t take this the wrong way, because this isn’t meant as a criticism of you specifically but rather the general mindset present in the question but… there is no “right” or “better” way to play this game. It’s something that I think a lot of people have lost focus of over the years — taking advantage of all the game’s avenues and just playing how you want to play.

Liz: Ugh, that’s exactly what I was going to say except way better put.

Mitch: If you want a direct answer, then it depends on what you’re looking to do. Do you (like I), raid? Focus on one toon. Do you want to see the story more fully (especially in Legion)? Go alt crazy! Honestly, it totally depends on how you want to play and what you want to achieve. Me, I focus on one character because I’m a completionist and don’t like to split my eggs in different baskets before they hatch. Or something. For real, though, play the game. Find what in it you find fun. Do that until it’s not fun. Find something new that you find fun.

Liz: I have literally nothing I can add to this.

Q4TQ: Going to Blizzcon? If not, will you pick up the goody bag this year?

Mitch: Each year it has looked more and more likely that I’ll be able to go. Last year, I was totally set to and then IRL happened and I, well, didn’t go. This year, things look even more likely than last year and I’m unlikely to hit any snags so I’m going to knock on wood and say, “Yes, I’m going!” And if I do make it, it will be my first BlizzCon ever, which is just crazy exciting and after years and years of wanting to go, I may actually cry a little when it all becomes real.

Liz: And we’re going to find a bar and argue with each other and put it on YouTube and it will be glorious.

Mitch: Yes, absolutely (THAT IS NOT A VODKA PUN BEE TEE DUBS).

Liz: One rule: no throwing drinks at each other. Drinks are too valuable to waste them by throwing them at people.

Mitch: With money being the number one reason I have never made it, you can trust I won’t waste it by throwing drinks at people. Even Matticus.

In Legion does it look like gathering professions have a decent use again? Or is the whole ‘Garrison” thing where everyone can make their own stuff still rule?

Liz: So far, there’s nothing like the garrison’s mine or herb garden in Legion. We’re back to chasing across the world for herbs and ore and trying not to throw our keyboards across the room when we were fighting a mob right by that ore node what made you think you could just mine it??

Mitch: I feel as though Anne would be able to answer this more enthusiastically, but gathering professions are definitely useful. You know why? One word: Fjarnskaggl. I rest my case.

Liz: Mostly there’s not an herb garden (that I know of) so you have to go into the world to get your Fjarnskaggl. Which obviously you need.

Mitch: You can never have too much Fjarnskaggl.

Liz: For reasons I don’t understand but feel I should not argue about.

Mitch: Also, the garrison system — as far as I know — is gone. Gathering professions even have random events that appear on the map with various gathering-based rewards. I haven’t experimented enough to give a full answer, but professions are definitely more interesting in Legion. More useful? Time will tell. But the garrison system is gone, and good riddance

I asked this once before but I botched the wording and it went into tangents on class mechanics.

Is it too early for a BW article on “the state of tanking for legion”? In this, I feel that all tank specs will be enjoying a big shift in needing heals and some other stuff. Same with an overview of the shifting healers tasks and abilities as a role in dungeons and raids.

What is the intention, in Legion, for the play-style in tanking and healing?

Mitch: I’ve spent a surprisingly large amount of my time in alpha tanking on my Demon Hunter and I can say that yes, it’s too early. Two or three builds ago, Blizzard changed self-heals on tanks from being percentage based to being attack power based. With Vengeance Demon Hunters largely built around self-healing, this is a pretty big tuning shift. More than just that, though, our talents are constantly shifted around so the abilities I have from one stream to another always change. Sure, a lot of the base stuff is still there, but it’s the minor tweaks that can really change the feel of a role. Keep in mind, I’ve only experienced the Demon Hunter side of tanking. Other specs may hardly change at all before launch.

I think Blizzard — internally — has an idea of how they want tanks to play. It feels like tanks will have to be very conscious of their own defensives because it will be harder for healers to catch up if things go wrong. The big damage spikes will rely more on tanks doing the right things than healers popping cooldowns to prevent/recover from it. That’s just my take, though, and it could very well change. The tuning is almost always done last and that’s what will really determine if the idea and execution end up being the same.

Liz: I can’t speak to tanking at all, but healers feel very much like they’re being pushed back into niches — everyone has a speciality instead of being adaptable to any situation. Holy Paladins feel like tank healers. Discipline Priests feel like second-line healers with DPS healing and shields. Restoration Shaman feel like group healers… you get the idea. So when I’m in the alpha running 5-mans — often with Mitch tanking — I feel a huge difference depending on which healing class I’m playing. The tank/healer dynamic feels weird in part because not all healers are actually very good at tank healing.

Mitch: See, that works for raids. That does not work for 5-mans. And with Challenge Modes actually being an alternate to raiding now (and sounding crazy fun), that’s a problem. It seems like Legion has a lot of really cool individual design goals but they’re not all clicking together in the bigger picture.

Liz: Or Blizzard is still trying to click them together. There’s a lot of iteration still happening.

Mitch: How much does that really matter right now? Again, it’s alpha but still. I don’t want another “Cataclysm heroics” scenario where Blizz tries to do something and can’t make it happen so they just default back to something else. I want a bit of niche healing to work. I don’t want every healer to be able to do everything exactly as well as others. But I do want them to do well enough that it doesn’t force players into a certain healer, and that is something I can see Blizz reacting to with, “Okay, buff all the healers so they’re all even” instead of making kinda-niche healing work.

Liz: And everything being exactly even is boring. So I’m not sure what the answer is. I haven’t been unable to keep a group alive with any healing spec I’ve tried so far… so it’s certainly possible to make these niches work. But you do feel a big difference depending on which healing class you’ve got.

Blizzard Watch is made possible by people like you.
Please consider supporting our Patreon!
Filed Under: Blizzcon, Healing, Professions, Q&a, Tanking
Advertisement