Wowhead has pulled some new voice files out of the recent patch 7.3.2 PTR and … Guys, if we go any further into this I gotta get this spoiler warning out of the way. Because it’s big.

Spoilers. Teasing the next expansion. You shouldn’t read any further unless you want that.

The voice files from Aman’Thul, Eonar and Aggramar are pretty bog standard boss fight stuff. But the dialogue from Illidan, Malfurion and Tyrande is anything but. Illidan is his usual self, but the dialogue confirms that he isn’t coming back from Argus, and he knew that going in.

The moment that the way to Argus opened, the instant my gaze fell upon the Legion’s homeworld. I knew I would not be returning from it. I will face my destiny whatever it may hold. Yet…I have left certain matters unsettled. Old wounds that I would see mended. This crystal bears two messages – one is for my brother Malfurion, the other for Tyrande.

As you might expect, these messages are farewells. Illidan never really apologizes for anything and if you’re looking for one here, you’re not going to find it, but he does entrust his brother and Tyrande with the responsibility for defending and healing Azeroth. And it turns out that what it has to be healed from is more than just what we’ve seen so far during the Legion’s invasion. Sargeras may be trapped, but he didn’t go down without a parting gift, as Archmage Khadgar explains. 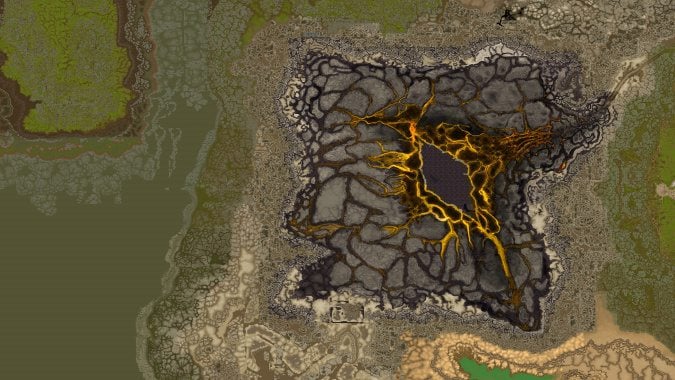 The sound file for Khadgar opens with a summation for the ending of the Antorus raid… and a dire pronouncement for the future.

The Legion is defeated. Its master, imprisoned.

But in his final spiteful act, Sargeras may have doomed us all. Our world is wounded, champion. Its life essence seeps out into the sands just as Magni foresaw.

This mere drop of Argus’ blood surges with incredible power, the might of a titan.

if the blood of Azeroth also proves to be a source of such strength, those who seek to rule this world will stop at nothing to possess it. The days ahead may be dark indeed.

For now, go to Silithus, gaze upon the wound in the world with your own eyes. We will find a way to save Azeroth, I know it.

What Sargeras actually did here is unclear. We know that Silithus is the place where C’thun “died” and the wound takes up much of the zone — did Sargeras rip the Old God out of the ground much as Aman’Thul once did to Y’Shaarj? Since C’thun was more in Ahn’Qiraj than in Silithus proper, I’m not sure. It might just be a coincidence that Sargeras did something to wound Azeroth in this spot. But whatever happened, it seems clear from Khadgar’s words that Azeroth is bleeding out from a traumatic wound similar to the one that the Titans once created and caused the original Well of Eternity to stabilize, and we are left to deal with the consequences on our own. This time there will be no Titans to save us.

Plus, having this wound and Azeroth’s Titan blood so close to AQ seems like a very, very bad thing. Does the “dead” God awaken and seek to capture this source of untold power, as Khadgar indicated? Silithus is fairly close to the ocean off it’s west coast as well, for folks who won’t give up on that South Seas idea. This could definitely be the start of an Old Gods themed expansion.

So there you have it. Illidan and Sargeras are both gone, at least for the time being, but Azeroth is in worse shape than ever, and Silithus is where we’ll find out what comes next.