Know Your Lore: The ocean mysteries of Azeroth

With nearly every expansion, the world of Azeroth gets a little bit larger – or at least, we seem to discover more of it. Of course, Blizzard isn’t pulling these places out of thin air. Pandaria had been mentioned here and there prior to Mists of Pandaria, even if as just a legend. The Broken Isles, or at least a small portion of them, were referenced as far back as Warcraft 3.

In Battle for Azeroth the world grows larger still, with the reintroduction of Kul Tiras and Zandalar. Both nations have been referenced before, but we’ve never set foot on either one – not until the new expansion is released, that is. But with all these land masses constantly being discovered, one has to wonder – is there more out there? Are there areas of the world we’ve never even heard of before? 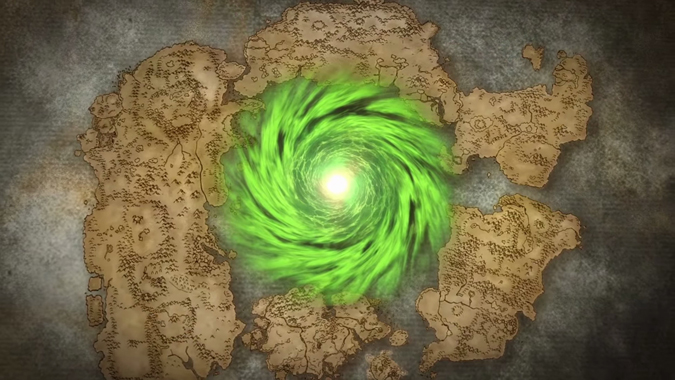 Originally, all of these disparate islands were one giant land mass called Kalimdor. Not to be confused with the Kalimdor of today, this continent was gigantic in scope. At the center of the continent was the Well of Eternity, site of the War of the Ancients – and the reason for the scattered continents we have today. The Well wasn’t just any mere collection of water; it was formed from a wound sustained by the world soul inhabiting Azeroth. That’s not water – that’s Titan blood, or at least the remnants of it.

When Malfurion Stormrage shattered the portal that allowed the Burning Legion into Azeroth, it created a vortex of unstable energy. That vortex detonated, sending massive earthquakes across the world as it stood. The seas surrounding Kalimdor rushed inward, and a giant chunk of Kalimdor was swallowed by the sea. In the center of it all, the waters of the Well of Eternity raged onward, forming the Maelstrom as we know it today.

There was no splitting apart of the world. The continents weren’t thrown asunder – the middle of Kalimdor simply disappeared beneath the waves. In other words, when thinking of the sheer size of that original continent, think of this: Once upon a time, one could simply walk from the western coast of today’s Kalimdor all the way to the eastern coast of the Eastern Kingdoms. All of that land is still there – it’s just underwater, now. 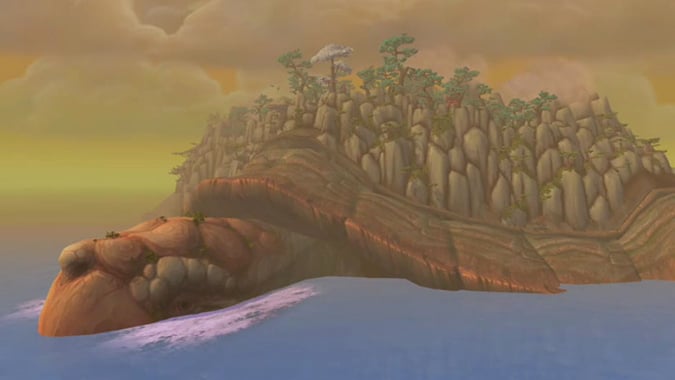 All of the islands scattered in between the two main continents are simply portions of land that never sank. The main exception to this is the Wandering Isle – it’s on the back of a giant turtle, after all, and not really a “proper” island. Pandaria could also be considered another exception, because it never actually sank. Emperor Shaohao essentially isolated Pandaria from the rest of the world before the Sundering occurred, so it wasn’t directly affected by the Sundering – it was already on its own.

Zandalar was once part of that initial landlocked continent. When the Sundering hit, measures were taken to protect the area – much like what happened with Suramar. Only unlike Suramar, the Zandalari didn’t remain behind their protective shield. When the Sundering was over, Zandalar was on its own, the surrounding lands drawn under water. Isolated, the Trolls of the area continued on, keeping in touch with their scattered kin as best they could.

Kul Tiras was founded some 2,700 years before the Dark Portal opened. At that point in history, the Humans of Arathor began to splinter and form their own nations. Gilneas was one of these new nations, but not everyone was content to remain there. A group of sailors left Gilneas for good, setting out on the open seas and eventually finding their way to the shores of a massive group of islands. These islands became Kul Tiras, a city-state that thrived on fishing and exports. 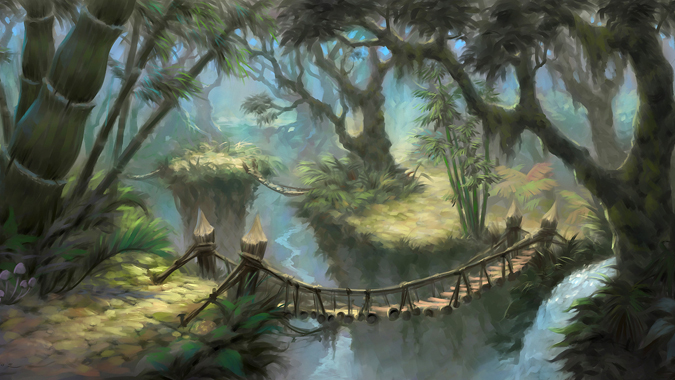 Although these two nations are the focus in Battle for Azeroth, there are others to be found as well. The island of Kezan was the tropical home of the Goblins, with Undermine, its capital, located beneath it. During the Cataclysm, the island’s volcano exploded, forcing the Goblins to execute a hasty evacuation. Along the way, another island was discovered – the Lost Isles. We haven’t actually been back to the Lost Isles. They’re visited once, during the Goblin starting experience, and never seen again.

In Warcraft 3, Thrall and the rest of the Horde stumbled across the Darkspear Islands, home of the Darkspear Trolls. The islands were besieged by both murlocs and Humans from Kul Tiras alike. In the end, Thrall invited the Darkspear to join the Horde in their journey to Kalimdor. The islands were thought to be destroyed by the naga Zar’jira at the end of that particular campaign. But we have no actual confirmation of that – all Darkspear were evacuated before the supposed “destruction” occurred.

In addition are a scattering of smaller, minor islands. Tel’Abim is probably the most well-known of these, simply because we have confirmation of its existence due to the presence of the Tel’Abim Banana in game. Another notable location is Plunder Isle, home of the Bloodsail Buccaneers, seen in the Warcraft Legends manga series. While there’s still no sign of the elusive island of Tel’Abim, Plunder Isle will apparently be making its debut in Battle for Azeroth – at least according to datamining. 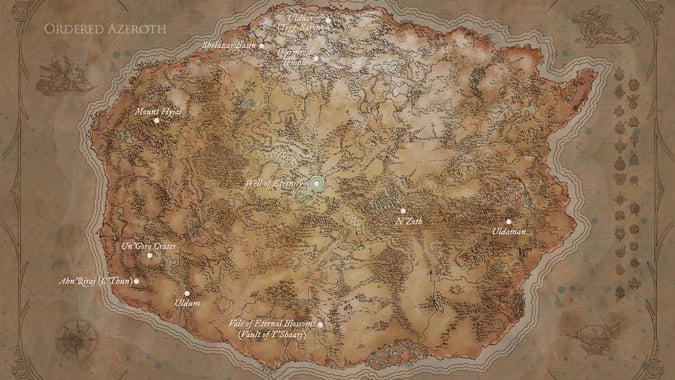 Not every island we’ve seen has been sizeable enough to call a continent in and of itself. Tol Barad for example is fairly small in scope, as well as Darkmoon Island. But each of these discoveries points to a potential for more. The Lost Isles were completely unknown – but they were sizeable enough for a city. The Darkspear Islands once housed an entire population of Trolls, albeit smaller than the Zandalari in scope.

But with as massive as Kalimdor was when the Sundering hit, it’s entirely possible there are islands out there we simply haven’t discovered yet. And one has to wonder – ancient Kalimdor was gigantic. But was it the only continent on Azeroth to begin with? Was it a supercontinent similar to the real-world equivalent of Pangaea, or were there other continents as well? Did they disappear beneath the waves, or is there more to discover?

Evidence suggests there may be more out there. Astute observers have long pointed out that the climate of Azeroth is a little odd to say the least. The southern coasts of each continent are all tropical or desert, which almost implies they aren’t actually as far south as you’d think, but at an equivalent to Earth’s equator. Mind you, Azeroth is a completely fictional world, so real-world rules may not necessarily apply in this instance. But the opportunity for more land masses is there, should Blizzard want to take that route. 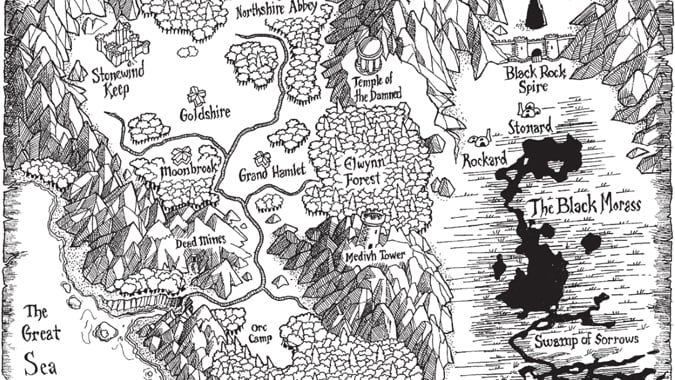 At this point, it almost seems a necessity that they do so. Way back in 1994, the original map of Azeroth included pretty much just the kingdom of Stormwind, and the Swamp of Sorrows. It went as far north as Northshire Abbey, and as far east as Stonard and Blackrock Spire. Since then, Azeroth has done nothing but expand, moving from one small kingdom to an entire world.

Sure, we could wander to other worlds, like we did in Burning Crusade and Warlords. But Azeroth is our home. With as vast as Kalimdor was in ancient days, it seems silly to presume we’ve discovered everything there is to see on our world. Why shouldn’t we be setting out to discover what we haven’t seen before? For now, however, exploration will have to wait. After all, should we fail to save the world in Battle for Azeroth, we might not get that opportunity.