Seriously, I don’t know how the folks at Blizzard manage it, but every time Wowhead datamines another one of these Kul Tiran Druid forms, I fall in love with how disturbing they are all over again. And this one is far from the exception. Instead, it manages to combine skeletal wicker dead aesthetic with carrion crow chic to be utterly terrifying and I want to turn into one so very badly I can’t even tell you.

We’ve covered the other Kul Tiras Druid forms, of course, and they’re all properly creepy, a style I’ve dubbed ‘wickerpunk’ for the way they look to be composed of stuck together bones, rocks, and gnarled wood. These flight forms take that aesthetic and really run with it. Their entire bodies look to be composed of carved driftwood with rotting leaves for feathers and their heads are raven or crow skulls. It’s just eerie and I am here for it. 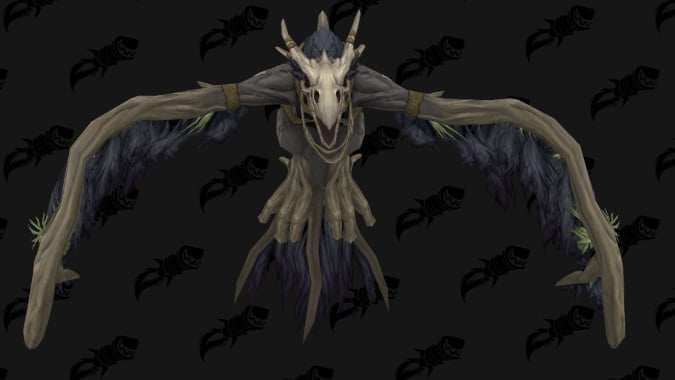 This thing looks like something that would stare at you from the top of a monster tree cackling at you as you attempted to flee for your life. It’s an absolutely perfect fit for the Kul Tiras Druid sensibility of yes, that’s nice, but could it have more bones and sticks that the other forms have adhered to. It’s like if a dead tree just up and flew around.

I didn’t think there was any way the Kul Tirans could stay in the race against Zandalari Druids, who get awesome dinosaur forms, but this has been a constant series of delights for me. I can only hope that the caster form for Kul Tiran Druids somehow manages to keep up with the other forms. And man, I have no idea what that’s going to look like. Maybe an actual Wicker Man with a desiccated skull for a head? No, whatever it is will be much cooler and more disturbing than anything I’d come up with.

Head over to Wowhead and take a look at the form in all four of its color variations.