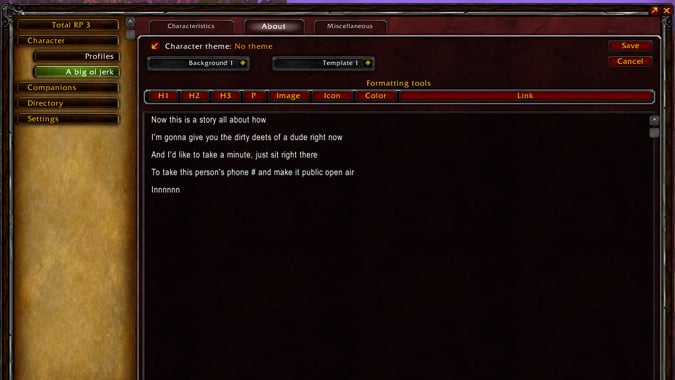 Addons have always had a substantial presence in World of Warcraft — usually for the powers of good, but sometimes…not so much. However, players that find objectionable content via addon material, like an RP profile, have traditionally been left with their hands tied. As the material in question was being presented via a third-party addon, Blizzard had no way of tracking or seeing anything objectionable. It was toxic behavior, certainly, but there was nothing that could be done about it.

That’s about to change in Battle for Azeroth, in a major way. Total RP 3 and Storyline addon author Ellypse sat down for a quick chat about the changes, and what it’s going to mean for players heading into Battle for Azeroth. “I was receiving increasingly more reports from users of Total RP 3 and other RP add-ons about cases where bad people would use RP profiles as a tool for harassment,” Ellypse said.

“As the addons provide a freeform canvas for the users to write anything they want with the RP description, some people would write direct harassment or even do doxxing (sharing private information, like phone numbers, real names, email addresses). RP addons display information in the tooltip, so this means anyone with the add-on would be instantly presented with that information when they have their cursor over those bad persons.” 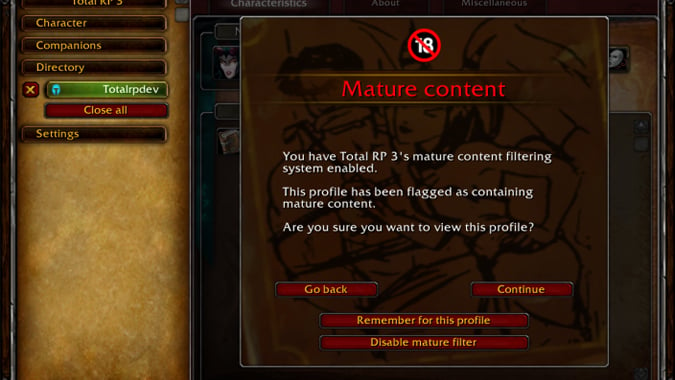 Total RP 3 already has a filter in effect for players wanting to avoid offensive language or objectionable material. It works in conjunction with parental controls and the mature language filter. But while the feature is helpful, it still doesn’t prevent the issue in the first place — and it doesn’t allow players to report bad behavior.

“People would try to report those bad people to Blizzard’s CS, but since they cannot access the addon data, they would dismiss the request saying this is third party software, and redirect them to us,” Ellypse explained. “On our side, we didn’t have any tools to fight this (we tried to think of a way to implement some kind of internal blacklist of people, but then they could just create new toons. I asked a few dev friends and no one could find a good solution for this). So being completely helpless but put at fault, I started contacting Blizzard about this, asking for help and tools to fight this.”

A potential solution has been quietly added to the Battle for Azeroth beta, in the form of a new function called SendAddonMessageLogged. In short, the function allows players using the addon to report other players for abuse. Ellypse clarified how the function works: “Authors have to implement this new function, it will not replace the existing one. Basically we can either use the existing one, and stay not logged, or implement the new one, that will be logged. The logged one has restrictions — it’s really meant only for user generated data. For example, DBM has already implemented this new function for its custom pull timers. At one point, you could type “/dbm pull 10 Custom message,” and some people would use that to display personal information (phone numbers, email addresses) on other people’s screens.” 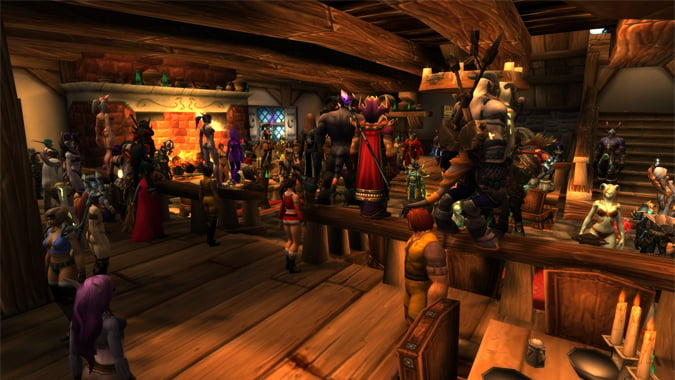 In other words, players will finally be able to report players in-game for objectionable material found in addons — but only if the addon author chooses to implement the function. For Ellypse, it’s a solution to a problem that’s existed as long as RP profile addons have been around. Total RP 3, as well as MyRoleplay, will implement the measures in the upcoming expansion. In addition, the Mary Sue Protocol, a function that allows different roleplaying addons to interact with each other, will also implement the feature. Hopefully, other RP profile addons will follow suit as well.

This isn’t an automatic solution to player toxicity. Players will still need to report Code of Conduct violations as they find them, using Blizzard’s reporting feature just like any other report. But Blizzard will now have the proof they need in order to take action against these reports. And anything that is considered a violation of Blizzard’s Code of Conduct can be reported — from doxxing and targeted harassment down to objectionable language.

What does this mean if you’re a player using these addons? It means what you type in your RP profile is going to be just as visible to Blizzard as anything you type in /say. If it’s not something you’d say publicly, you shouldn’t be putting it in your RP profile, either. I’m lookin’ at you, Goldshire.

Blizzard has been dedicating a lot of time towards combating toxicity — Overwatch in particular has taken numerous steps to curb toxicity in game. Blizzard is also a member of the Fair Play Alliance, an industry-wide coalition of a multitude of gaming companies intent on combating toxicity and promoting fair play. Addons have always been a grey area where reporting is concerned, so it’s great to see Blizzard taking active steps to come up with a solution to the issue. Ultimately, the success of the SendAddonMessageLogged feature depends on players and addon authors to be really effective. But the tools are in our hands now — and that’s definitely a step in the right direction.