The Darkshore events of the last couple of weeks have been hard to process, and Blizzard’s twin novellas, A Good War and Elegy, don’t exactly offer any comfort. What they do provide is illumination — and a much closer look at the plans of both Alliance and Horde as both factions rush unswerving towards full-out war. The two novellas are available in print as part of the physical Collector’s Edition of Battle for Azeroth, but they’ve also been released in full on Blizzard’s website.

Both novellas cover the same series of events — the march on Darkshore, and the burning of the World Tree. A Good War is told through the eyes of the Horde, primarily through Saurfang. Elegy is the Alliance half of the equation — some of it told through Delaryn Summermoon, some through Tyrande, and some through King Anduin Wrynn. Both novellas go where quests simply can’t go, into the eyes and minds of the various characters involved in each scenario.

A Good War, written by Robert Brooks, shows the beginnings of the Horde attacks through Saurfang’s eyes. It’s not necessarily a sympathetic version of the Horde that’s being presented here as it is a practical, militaristic operation. Saurfang has a plan, Sylvanas agrees with the plan, the plan is carried out to exacting specifications. And it all would have gone according to those plans were it not for the end of the novella, where Sylvanas takes matters into her own hands and orders the World Tree burned.

Saurfang is an Orc who has lived through all three wars. He remembers the Draenor of old — he remembers the attack on Shattrath City at the height of the Old Horde’s dominance on the planet. He’s seen a lot, he’s experienced a lot, and he has the kind of military mind that is incredibly useful to Sylvanas. But he’s also borne witness to what happened to that Horde of old. He understands what the Burning Legion did to them, and he regrets, to some degree, the actions he took while under the Legion’s thrall.

That doesn’t mean he’s going to shy away from the prospect of war. But he’s an Orc with honor — and while yes, soldiers will fight and soldiers will die on both sides of the equation, the end result is a finale to that faction conflict that has ebbed and flowed since the Horde first arrived in Kalimdor. With his plan, the Horde stands a chance of conquering, ending the Alliance, and earning their continued survival.

It’s an interesting look at a character who has been around since the earliest days of WoW, and an interesting look at how the Horde is operating in general. It’s not a war machine like Garrosh Hellscream wanted, but when faced with adversity, the Horde has and always will rise to fight. But with Sylvanas at the helm, the nature of that battle has changed — and you see it start to change Saurfang as well. It ties in nicely with the Old Soldier cinematic that released last week. 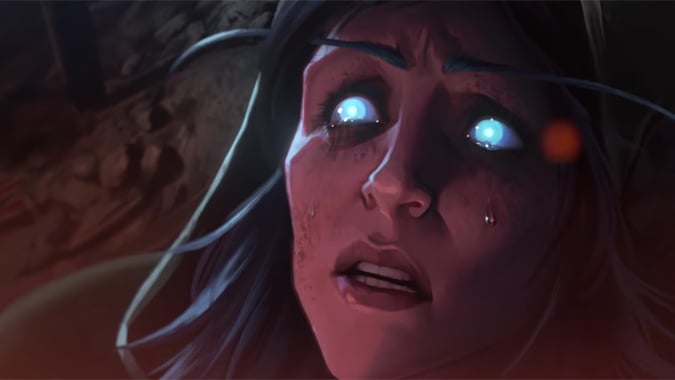 Elegy is written by Christie Golden, and…bring tissues again, guys. This is the Alliance side of events presented in A Good War. It’s absolutely heartbreaking. Golden pulls no punches as she details the events that count down the moments until Teldrassil burns, and what the Night Elves do as they attempt to hold back the Horde army. I’m simultaneously delighted and saddened that we got a much closer look at Delaryn Summermoon here. Delighted because she’s an excellent character, saddened because we know what happens to her at the conclusion of the novella — a scene we saw play out in Warbringers: Sylvanas, and in game as well.

But we’re also presented with a much closer look at Alliance leadership and how they handle a crisis of this scale. Mia Greymane is featured here, and she’s a character we haven’t really gotten to know — her relationship with Genn and the way she handles him is something I’d like to see more of. And things that might have made little sense to those simply playing through quests, like Tyrande’s decision to flee with Malfurion in Darkshore, are made much more clear. There are reasons behind everything that takes place, and Elegy goes over them all in painful detail.

Because it is painful — and once again, Golden shows an alarming skill for painting emotion in a way that’s sure to set a lot of people to tears, myself included. What Sylvanas tried to do was splinter the Alliance with one swift, calculating, unspeakably cruel blow. What she has done is unite them into a unified presence that will not relent and will not falter until they see the Banshee Queen struck down, and the Horde along with her.

Each of the novellas run about 90 pages in length — not quite as long as a full-size novel, but considerably longer than the usual short stories we see out of Blizzard’s writing team. You can read them on Blizzard’s website, or download them and read them at your leisure. I’m not sure where the story of Battle for Azeroth is going to end, but if the introduction is any indication, it’s going to be one hell of a story.