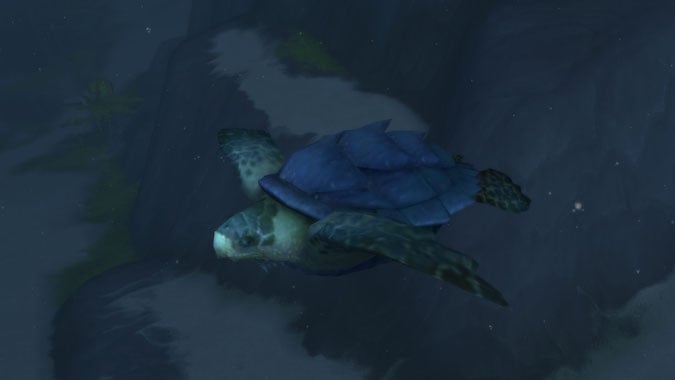 One of the more popular World Quests is Beachhead, where you help baby turtles make it to the sea, and, hopefully, out into the ocean to live long and productive lives. You assist by shooting crabs winding across the beach and albatrosses prepared to dive-bomb from the sky. Crabs will, in real life, prey on sea turtles — though it’s not albatrosses, but everyone’s “favorite” in-game bird, seagulls, who can decimate a nesting area by dive-bombing the turtles as they head to the water. I have to admit to a fondness for shooting those out of the sky as I’m waiting for Scrollsage Nola to tell me a turtle has made it to the water.

If you don’t know the name, Greg “Ghostcrawler” Street was Lead Systems Designer for World of Warcraft before heading to Riot Games. However, before becoming a well-known name in game development, he obtained a PhD in Marine Biology and has often provided some extra insight into Azeroth’s ecosystem.

So, naturally, Wowhead knew he was the exact right person to ask about the impact something like “Beachhead” would have on real-life ecosystems. Namely, what would the effect be of having a mass influx of baby turtles with a simultaneous dramatic reduction of their predators? Ghostcrawler pointed out that seagulls and crabs are doing well for themselves, while 6 of 7 sea turtles are threatened or endangered. Shockingly, an overabundance of crabs or seagulls feasting on babies is not the primary cause of turtles’ population decline — humans are the real culprit!

Ghostcrawler also pointed out the removal of a predator in some ecosystems can cause another animal to overpopulate its area. He cited the removal of large predators, such as wolves, from ecosystems has previously led to an explosion in deer populations. This subsequently caused deer to starve or develop diseases which are normally kept in check. He felt, however, due to the degradation in the habitat where sea turtles nest, there are only so many which can breed and produce young to make it to the ocean. There would probably never be the explosion of turtle populations which would cause a crash in their ecosystem, were Beachhead! to suddenly become a real-life occurrence.

So, the bottom line is “Fire away!” Clear the beaches of crabs and albatrosses (gulls). Help those sea turtles get to the water. If you are so moved, Google “Save Sea Turtles” and you’ll find quite a few nonprofits dedicated to saving turtles and their habitats. I also highly recommend Ocearch.org, where you can follow the travels of tagged sea turtles — the most active ones are currently in the Mediterranean. Thanks, Wowhead, for asking our favorite Ghost Crab the question that needed to be answered! Be sure to check out Ghostcrawler’s response in full over on their site.

Blizzard Watch is made possible by people like you.
Please consider supporting our Patreon!
Filed Under: A Turtle Made It To The Water, Ecology, Ghostcrawler, Greg Street, Scrollsage Nola, Sea Turtle, World Quest
Advertisement