Update: This was originally published just for our supporters, but now it’s available for everyone. Enjoy!

Last week, Blizzard’s World of Warcraft hotfix notes made a pretty big change to how healer mana regen works in PVP. The full notes are posted below, but the short version is that all healer regen was cut in half, plus or minus 5% for a couple classes. Similarly, mana regen for Balance Druids, Feral Druids, and Elemental Shaman — hybrid classes — was reduced by 35%. Again, all of this is only in PVP conditions, but it’s a pretty big hit to any PVP healing which requires mana.

The problem, however, is that last bit — this is only a nerf to healing which requires mana. Do you know how many non-hybrid classes are reliant on mana to heal themselves? Oh, right.

But I’m getting ahead of myself. First, the notes, alongside the developer insights explaining why the changes were made in the first place.

Look, in theory, I get why this was done. In and of itself, nerfing healer regen across the board doesn’t necessarily change the relative strength of healers in PVP. Yeah, Resto Druids were hit a little harder and Disc Priests a little less so, but overall, it’s a fairly even spread. The end result is that healer mana matters more and PVP engagements — particularly arena matches — shouldn’t last nearly as long as they used to.

The problem is that healers — and healing that have heals in their off-specs — aren’t the only ones who can heal, so nerfing their mana regeneration doesn’t solve the problem. Virtually every class in the game has a way to heal nowadays, and many of those healing abilities are easier to pull off than any main- or off-spec healing is. In making healers weaker in PVP, Blizzard has only made other classes stronger. 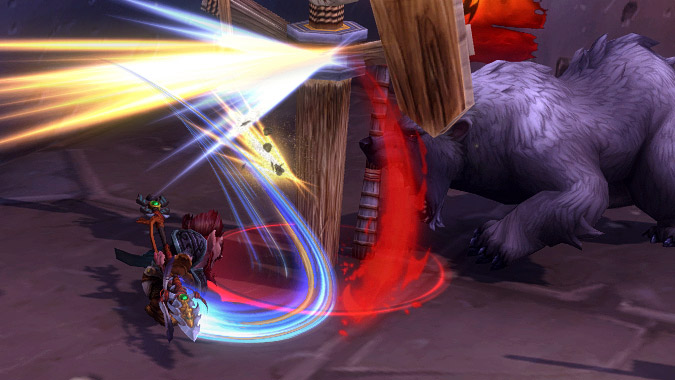 Self-healing in PVE is understandable, but the same can’t be said for PVP

Don’t get me wrong, I understand why Blizzard has added more and more self-healing over the years. The game — really, the gaming sphere in general — has gotten to the point where not having self-healing in PVE would become tedious more than worthwhile to a large portion of players. Whether you agree that the hit to “class fantasy” is worth it is an argument for another day. The point I’m trying to make is that I get why self-healing exists — in a PVE setting.

But in a PVP setting, the game changes — quite literally, thanks to the advent of PVP talents and War Mode — but so does the strategy of the game. You’re ducking in and out of line of sight, rotating CC types to make sure you avoid diminishing returns, tracking what cooldowns your teammates and opponents have all used — there is quite a bit of minutiae to watch. In between all that, you need to coordinate with your healer to make sure you can still be healed and that your healer is protected enough to heal themselves.

Having a dedicated healer in a PVP setting — especially arenas — is a choice, and it’s one that should feel like it pays off. But even before the nerfs, there were times when that wasn’t the case. I’m not talking the “Oh my god, a Mage and Rogue just blew all their cooldowns and deleted me in one second” moments. Those, I get — they specifically went in with two classes that can nuke, and it paid off because the team with the healer couldn’t live through the burst damage.

No, I’m talking about the times when both teams have a healer, but the team with the DPS Warrior wins because the Warrior can heal instantly, on the move, and without worrying about what their healer is doing. Anyone who knows me even a little knows that I play a Shadow Priest — so, yes, there is a bit of bias in this example. All the same, I fundamentally fail to understand the logic that allows a pure DPS class to heal better and without the drawbacks of a healer or healer hybrid. My specific healing requires a cast time, and that cast frequently gets interrupted by my opponent. When that happens, I’ve not only lost out on my primary form of self-healing; I’ve lost my ability to deal damage, thanks to both my heals and DPS coming from the same spell school. The Warrior? They can pop defensive cooldowns, continue DPSing me, and self-heal. It doesn’t feel fair, and it doesn’t feel fun.

There are some classes out there which throw a (small) wrench into my request to remove non-healer healing. Blood Death Knights and any form of Demon Hunter are particular problems, since all specs involved revolve around self-healing. That said, two of those are tank specs, so bringing them more in line is a matter of making sure their overall DPS doesn’t rival that of a pure DPS class. Havoc Demon Hunters, meanwhile, rely more on small amounts of passive healing. They don’t have the same sort of strong, reliable cooldowns as, say, Rogues (Crimson Vial), Warriors (Impending Victory), or Hunters (Exhilaration, Camouflage, and Mending Bandage).

If you still hate me and everything I stand for, great! I’m probably doing something right. But also, allow me to present cases of  self-healing that’s much, much more reasonable. Look at Warlocks’ Healthstones. They heal for a comparable amount to any of the above, but they have a long cooldown that also doesn’t start until the user has left combat. I realize Healthstones are not the only self-healing Warlocks can do, but they’re a fantastic example of the sort of non-healer healing that feels reasonable and still within class fantasy. Similarly, Cauterize for Fire Mages heals the Mage without completely saving them. If it procs and they have a healer? They’re golden. If they don’t have a healer, they can still pull off a last-second kill with the right combos. But the important part is that Cauterize won’t proc again for another five minutes. In a way, it’s the Mage equivalent of Rogues’ Cheat Death, another ability that feels much more in-line with the sort of PVP healing/survival that feels reasonable.

Again, I realize that my position as a Shadow Priest main does put me in a position of subjectivity when it comes to self-healing in PVP. But having played casual-to-mid-level PVP since Vanilla, I’ve watched the transition from “almost no self-healing” to “everyone gets self-healing,” and I’ve watched it become a bigger and bigger issue that makes PVPing feel less fun for healers. I’m not arguing for self-healing to be removed from PVE content — heck, I’d settle for self-healing for all classes if it were more in line with Healthstones and Cauterize.

But the excessive amount of self-healing present in PVP, the large disparity between the strengths of that self-healing, and the dissonance between what feels like actual class fantasy and what feels like mechanical necessity being brought from PVE to PVP needs to be addressed.