We’ve finally gotten a look at what’s coming in patch 8.3: Visions of N’zoth. There’s a whole heaping pile of Old God corruption being spread all across Azeroth, including to our Mythic Keystone dungeons. Much like the last major raid tiers, the new seasonal affix is closely tied to the theme of the raid, and starting with Season 4 in patch 8.3, Mythic Keystone above level 10 you will have the Corrupted affix.

I think this is Blizzard’s best affix yet.

Corrupted will sprinkle Obelisks of the Black Empire throughout your dungeons, but unlike Queen Azshara’s Beguiling, they won’t buff the trash around them. Instead, you’ll be able to click on them to get pulled into a different phase of the dungeon. Inside of that phase, you’ll have to defeat a miniboss lieutenant of N’zoth. Once that miniboss is defeated you’ll be returned back to the regular dungeon — wherever you’re standing. If you move that miniboss farther into the dungeon, you’ll be able to waltz right past any trash packs in between. No Rogue or Invisibility potions required! 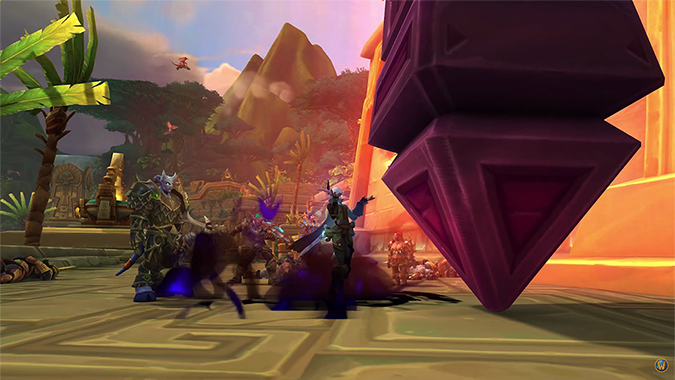 These Obelisks are going to make for some amazing dungeon strategies. Beguiling tried to force some changes on how we dealt with packs, but usually just resulted in the group focusing on the emissary and nuking it down before it could do too much damage. But with these new skip opportunities, I’d be surprised if we ever tackle some of the more difficult pulls in the runs again. Maybe we’ll even finally see some diversity in the Mythic Dungeon Invitational if Rogues aren’t as necessary for their ability to skip past tough packs.

Ion also mentioned that if you skip dealing with any of the Obelisks and their minibosses, you’ll have to contend with them during the last boss fight. That probably means that any left alive will hop out and you’ll have to deal with them while fighting the final boss. Similar to how you could time Bwonsamdi’s Reaping from season 2 to happen during a boss fight. Reaping wasn’t that hard to deal with, as long as you dodged the circles, so we’ll have to see how difficult the minions of N’zoth end up being.

Corrupted looks like it’s going to really shake up Mythic Keystones in a big way. I love how much control over dealing with it is in the hands of the players. If you’re extremely overgeared, you can skip most of the Obelisks and just make the last fight harder. Or choose to go slower and deal with each as you come to it. Players in the MDI already do absurd pulls, I can’t wait to see how this shakes things up for them.