Wrathion has been more or less absent from World of Warcraft since the end of Mists of Pandaria. There was a reference to him in Warlords of Draenor, and a brief appearance in the Deaths of Chromie scenario, but that was technically an alternate future. No, until this expansion, we haven’t seen Wrathion much since the defeat of Garrosh Hellscream. But as of patch 8.2.5, Wrathion is back. Moreover, it’s clear that he and his agents have been studying the Old Gods and their corruption very carefully.

So what is Wrathion up to? And how does it all dovetail into patch 8.3 and the Visions of N’Zoth? Let’s take a look. 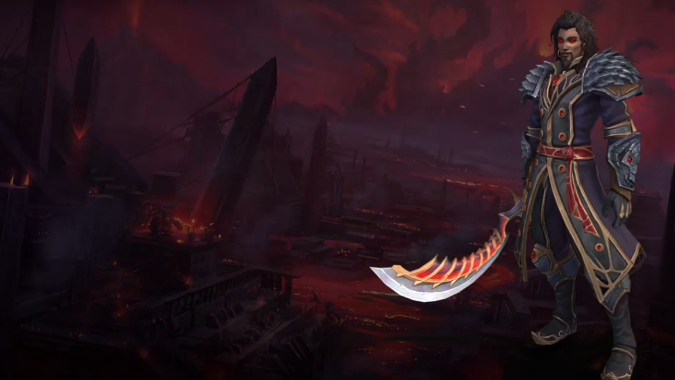 The Wrath of a Dragon Prince

In patch 8.2.5, Wrathion resurfaces as part of the developing story of the Heart of Azeroth, as Magni Bronzebeard and MOTHER fight to find a way to save the world we all live on from the Old Gods. One of the people recruited to aid Magni is Ebonhorn, aka Ebyssian, a black dragon who was hatched from a dragon egg purified by Huln Highmountain 10,000 years ago. The ancient Tauren hero used one of the Pillars of Creation, the Hammer of Khaz’goroth, to achieve this — but while Ebonhorn is uncorrupted, the Old Gods still want to turn him to their will. And when Azshara freed N’Zoth, the Old God’s influence nearly forced Ebonhorn into servitude.

Rather than let that happen, or let MOTHER kill Ebonhorn, Kalecgos hit upon a solution — seek out the aid of Wrathion, who has been mysteriously observing much of the Old Gods and their ways. While Wrathion himself never actually makes an appearance, the players travel from lair to lair and find his minions, who pass along excerpts from Wrathion’s journal that detail his long struggle to come to some kind of understanding of the nature of Old God corruption, a force he fears greatly after seeing what it did to Deathwing, his progenitor. If the mighty Earth Warden could succumb, all Black Dragons are at risk, and it is that risk that Wrathion seeks to purge from himself and his flight.

In his journals, Wrathion very deliberately tells the players how to create an elixir that can protect Ebonhorn from the Old Gods. Using this wisdom, Kalecgos is capable of doing exactly that, and Ebonhorn is saved from N’Zoth’s influence. But we don’t actually see Wrathion — we merely follow his trail to Karazhan and his notes. So what is Wrathion up to, and what will we see from him in the future?

The taint of the corruption runs deep

Well, we know a few things from the Developer Update — we know that Wrathion returns. We know that Wrathion is the means by which Horde and Alliance heroes learn how to defend themselves from N’Zoth’s corruption. And we know that he’s going to be helping us with Legendary Cloaks, because apparently that crazy Dragon just loves capes. We also know, thanks to the datamining over at Wowhead, that Wrathion is going to have a significant presence in patch 8.3, although we have to remember that this is datamined content and things are always potentially subject to change until they finally go live. But with a hearty spoiler warning, I feel like we can talk a bit about what we’ve seen in the data mined details.

I’m doing this part so you can turn away if you don’t want spoilers, because I’m warning you about them.

In patch 8.3, Wrathion has interactions with Kalecgos and Ebyssian, as well as Alexstrasza, Merithra of the Dawn, and even Locus-Walker, the Ethereal who tutored Alleria Windrunner in Void magics. These interactions show that Wrathion takes a fairly active role in the opposition to N’Zoth, serving (along with Ebonhorn) as a representative of the Black Flight. We also hear an exchange between Locus-Walker and Wrathion about the use of the Void to oppose the Old Gods, with Wrathion dubious of the possibility and Locus-Walker chiding him for being unimaginative.

There’s also a brief snippet of dialogue between Wrathion and Dark Inquisition Xanesh, which reveals that there is yet another threat to the Black Dragonflight, namely that somehow N’Zoth and his servitors might be able to corrupt the Black Dragons in a way that somehow involves Nefarian’s lab atop Blackrock Mountain, and potentially even Nefarian and Onyxia themselves, despite them both being very dead. Double dead, in fact. We don’t know what this all entails, but it’s interesting regardless.

So it definitely seems that Wrathion is playing a lead role in patch 8.3. He helps us ward off the corruption of the Old Gods while closing Horrific Visions in Stormwind and Orgrimmar, he takes a leading role among the Dragons as they oppose N’Zoth, and he even has interactions with others, going so far as to call Ebonhorn brother during one exchange between them.

Wrathion’s back in a big way in patch 8.3, but we still have things we don’t know about what he’s doing and how it all ends up.

Blizzard Watch is made possible by people like you.
Please consider supporting our Patreon!
Filed Under: Battle For Azeroth, Patch 8.2.5, Patch 8.3, Visions Of N’Zoth, Wrathion
Advertisement