Shadowlands Covenants have tons of cool cosmetic rewards to choose from 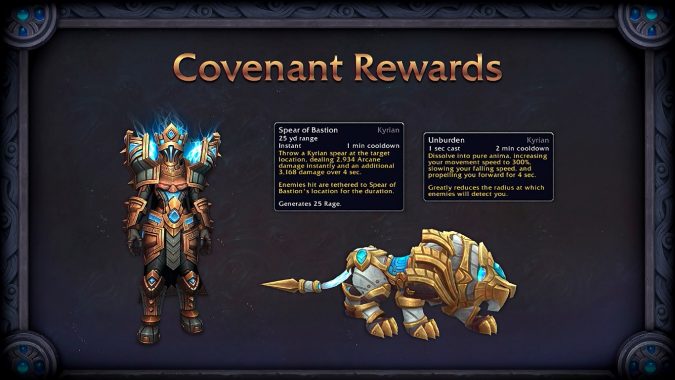 Choosing one of the four Shadowlands Covenants will be a key choice as players enter the new expansion. The Covenants will bestow rewards and boons upon the heroes who choose to align with them. Some of these have direct effects on combat and gameplay like active abilities, Soulbinds, and talent trees, but there’s also cosmetic rewards to earn: a mount, a pet, an armor set, and several back or cloak attachments. These are relatively new items like the recently introduced backpack transmog item or the totems on the Tauren Heritage Armor.

Our friends at Wowhead sat down with Blizzard developers to gain more insight into the rewards players will receive as they increase their standing with their chosen Covenant and learned the pet will also have a special ability usable in the Convenant’s home zone.

“bring out your slime pet in Maldraxus, it has a specific function, where it goes and eats up slime pools and gets you items. We want everything to feel like it interacts more with the world.” 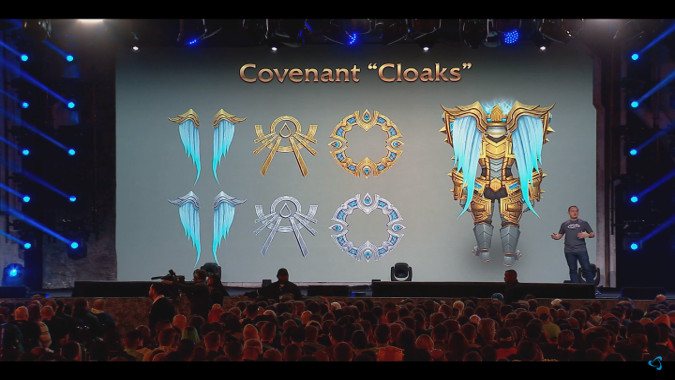 Each Covenant has a distinct aesthetic from the natural beauty of the Night Fae, to the Gothic horror of the Venthyr, and this aesthetic is reflected in their rewards. The Necrolords pet is a slime while the Night Fae have an iridescent faerie. The Kyrian have halos and wings evocative of many of the Paladin and Priest tier sets. The Necrlords are skulls and spikes. Warriors and Death Knights should feel at home. The Night Fae live in a blue tinged Emerald Dream and their rewards remind me of Druids’s sets. The Venthyr share similarities to Warlock and Rogue tier sets over the years.

How do I get them?

There’s scarce information at the moment on how exactly these rewards are earned. Many expect them to be reputation based and that would fit with the statement that you can change Covenants, but it will be a processes. This may be similar to changing from Aldor to Scryer back in The Burning Crusade. Also like TBC, we could see the return of drops which reward faction to a specific Covenant like the Fel Armament / Arcane Tome did for Aldor and Scryer.

But the Wowhead interview also indicates these rewards are upgradable.

“There’s an armor set that we showed earlier today that makes you look like your Covenant, you get a mount with multiple different colors and then an upgraded version of that mount that you can obtain by doing various different things, it’s similar to how there were Artifact skins that were difficult to obtain. We want there to be long term goals for your Covenant.” (emphasis added)

The reference here to the Artifact skins indicates the alternate appearances will come from a variety of activities from PvP to raids to Mythics. Perhaps one appearance will come from a long expansion long quest chain like Balance of Power. It also opens up the possibility of special skins from a Mage Tower type of challenge. However they are obtained, having end game goals helps players direct their game play and a sense of accomplishment.

Blizzard Watch is made possible by people like you.
Please consider supporting our Patreon!
Filed Under: Covenants, Shadowlands, Transmog, Wow Shadowlands
Advertisement