BlizzCon’s big Diablo 4 announcement came in with a blood-soaked bang. But how can you get your Diablo fix now? Don’t despair; Diablo 3 is waiting for you to join in. Season 18 has just ended, so you have a bit of time to brainstorm what class you’d love to try first. Why not try the newest addition to D3‘s lineup, the Necromancer?

What is a Necromancer?

The Necromancer is a caster centered around weaponizing blood, bones, and the undead. Wielding scythes and phylacteries as class-unique gear, the Necro can directly inflict damage or summon pets to dispense pain on their behalf. As a caster, they are very squishy and can be taken down by elites in a single shot.  Such swift deaths are avoidable with a quick application of their evasive and defensive abilities.

The Necro’s primary attribute is Intelligence — same as the other caster classes, Wizard and Witch Doctor — although Vitality is surprisingly critical. Their resource is Essence, termed a static resource as it does not decay like the Barbarian’s Rage, but neither does it automatically regenerate like other casters. Necros rely on either their Primary abilities or Devour to restore their resource pool. Depending on the build, the Necro can also tap into a secondary resource: their health pool. Blood Rush and Simulacrum spend health to cast as part of the base ability, and others like Bone Spear can spend health as part of a Skill Rune to increase damage.

The Necro has quite the toolkit available, with pure damage-dealing skills, pets, curses, and utility skills that reduce damage taken or provide a quick escape. Some powerful options to consider are: 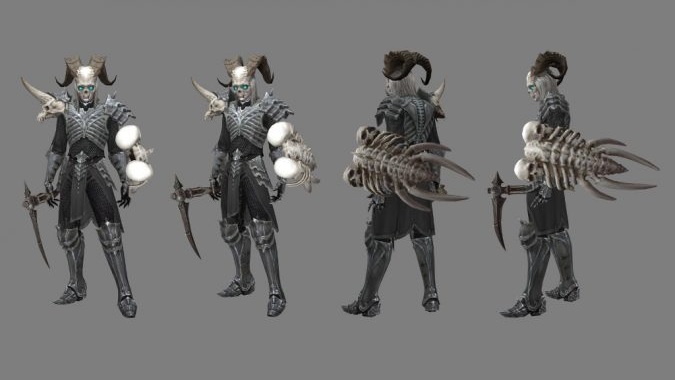 As with other classes, the Necromancer’s armor sets highlight specific abilities to help define your build:

Why you should play a Necromancer

Do you love the idea of yanking the very blood and bones from your victims, having an array of pets at your disposal, and whacking about with a monstrous scythe? Then the Necromancer is the class for you. Mind your health and positioning, and you will completely tear through Sanctuary. Happy hunting!