Announced to little fanfare at BlizzCon earlier this month, Mengsk is the latest addition to the StarCraft 2 Co-Op commander roster. Mengsk is also another “what-if” commander in that, by the time the Co-Op missions ostensibly take place (during and after the Legacy of the Void campaign but before the final Epilogue missions), Mengsk had already been killed on-screen by Kerrigan. However, as with Tychus, Zeratul, and (arguably) Stetmann, new commanders are more an opportunity for a unique fantasy and unit composition with new mechanisms in place rather than any attempt at telling a coherent story.

To be clear, Co-Op mode has been ruled non-canonical in the past, but prior to these more recent additions, the team wanted to keep a veneer of plausibility with the existing commanders. Over time, we’ve seen that chipped away and eventually abandoned altogether, which we’ve seen coupled with the commanders becoming more outlandish in their design and implementation. Speaking of which…

With that in mind, here are the core details on Mengsk as a commander:

What we see with Mengsk is a continued efficiency of resource usage by the StarCraft team, in that otherwise unused units and structures from the campaigns have found a second life in Co-Op when married to a particular commander’s fantasy. And a design like Mengsk, as someone who was perfectly content to use the Zerg as offensive weapons, plays perfectly into the use of Cerberus Zerg skins in his Dogs of War calldown — which, keen-eyed readers may note, were added as a complete Zerg skin set with the most recent War Chest. 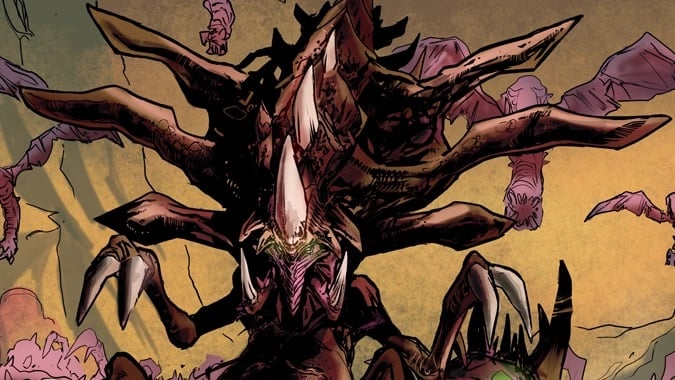 It’s no secret that SC2 isn’t getting a lot of new content these days, but we’ve heard that Co-Op became a runaway success since it launched with Legacy of the Void. The notion that new content would center around new commanders isn’t hard to believe, just as it makes sense that Blizzard would lean into using more recognizable characters even if they’re canonically dead OR if their cooperation wouldn’t make sense — because, let’s be honest, after what we’ve seen established in SC2, there’s no threat that would compel Raynor or Kerrigan to cooperate with Mengsk, of all people.

A key reason this is important is because it opens the door even further for commander concepts that have generally been written off in the past because “they wouldn’t make sense” — Niadra, with her overriding imperative to destroy the Protoss, comes to mind. A rogue brood queen spawned by Kerrigan during the Heart of the Swarm campaign, Niadra was promptly abandoned by Kerrigan, and in the Shadow Wars comic series turned up on a backwater planet having set a trap for the Protoss and the Terrans. While the story ultimately followed the scarred psionic marine Elms instead of Niadra’s campaign, it left the door open on the rogue queen’s narrative and demonstrated that she was perfectly happy to use tactics that were unconventional even for the Zerg. That has made her a common suggestion in lists of future commanders, even if it’s not clear what fantasy she’d capture that’s not already personified by one of the existing Zerg commanders.

All told, Mengsk continues the trend of Blizzard keeping StarCraft 2 interesting, and continues to broaden the design space of what new commanders can do to differentiate them from the standard multiplayer races. With no sense of when any other new StarCraft games are coming, the occasional infusion of new material in the SC2 space is a reminder that it still has a lot of life to it.

Have you tried out Mengsk on the live servers? Have any wild, off-the-wall ideas for a new Co-Op commander? Tell us all about it.