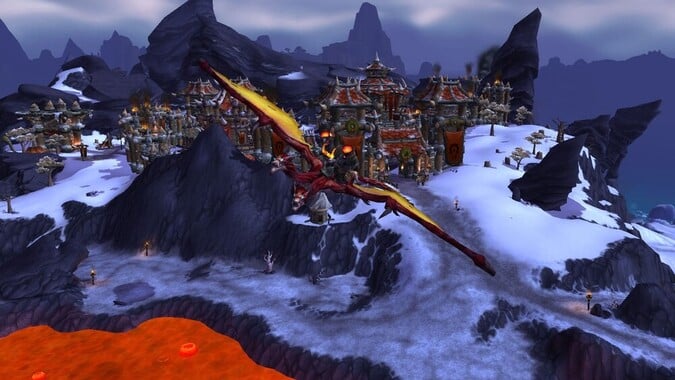 Flight enthusiasts rejoice! No longer will you be cruelly shackled to the ground in Warlords of Dreanor and Legion zones. Blizzard confirmed that they’re removing the Pathfinder requirements from both of those expansions in the Shadowlands alpha. Now the ability to fly on those continents will be bundled in with the Expert Riding skill that you can unlock at level 30.

With the major changes coming to leveling characters from 10-50 in Shadowlands, we want to make sure that there is a navigational parity among all of the different expansions you can choose while questing. In the next version of the Shadowlands Alpha that will appear this week, testers are going to see an intentional change coming to Shadowlands for a couple of older Pathfinder achievements.

Specifically, the flight training rewards from Draenor Pathfinder and Broken Isles Pathfinder, Part Two will no longer be required for flying in Draenor or Broken Isles content. These will now be granted at level 30 with expert flying.

The achievements will remain in place as before, and Draenor Pathfinder will still be the way to earn the Soaring Skyterror mount, while Broken Isles Pathfinder, Part One will continue to reward increased mount speed in the Broken Isles.

Thank you very much!

The achievements aren’t going anywhere as both of them have other rewards tied to them. Draenor Pathfinder will let you ride on the Soaring Skyterror, one of the gorgeous two-headed chimera mounts from Warlords. Better yet, it’s red — everyone knows that the red ones go faster! Legion’s Pathfinder achievement will increase your mounted speed while you’re on the continent, thus actually making the red ones (and all of the other colors) go faster!

Noticeably absent is Battle for Azeroth. I hope that there’s a plan in place for making that no longer necessary for new players. Will we see the Battle Pathfinder achievement changed like the other two when the next expansion comes out? It does have a mount with it, so there would still be a reason for players to go back and get it done if they wanted the Wonderwing 2.0. But with BFA specifically excluded from Blizzard’s announcement, they may want new players — the only ones who will be required to level through BFA — to have to explore the world on foot before taking to the skies.

If you’re interested in flying in Battle as soon as possible it’s a good idea to take full advantage of the currently active Impressive Influence reputation buff before it goes away in the middle of May. The buff boosts reputation bonuses by 100%, so it’s a great time to finish off your rep grinds.

Battle for Azeroth aside, I’m glad that they’re finally loosening the restrictions on the other two expansions. I know more than a few players who were never planning on leveling through either one because it just wouldn’t be as fun without flying. Everyone should be able to play through Legion! I still slow down and complete my Class Hall storyline with every character I take through it. It’s some of my favorite storytelling that Blizzard has done.

See you in the skies!