In the  Afterlives: Bastion short, Frostmourne appears to be able to rend souls in half. More importantly, the runes on the blade are revealed to have come from the Maw itself — a reveal which shakes Devos to the core. But how did a weapon of the Maw make its way to Azeroth? Why is Devos so worried about the implications of that reveal? And what exactly is Frostmourne’s connection to the Shadowlands and Torghast?

I feel a bit like a stand-up comic here, but these are interesting questions. They cause us to question everything we thought we knew about the Lich King, Frostmourne, and the Helm of Domination. That includes their origins and how the Burning Legion gained hold of the artifacts, using them to turn Ner’zhul into the Lich King. If the runeblade was channeling the power of the Maw, as Devos stated, how did the Legion procure it? Let’s look at the origins of Frostmourne and how it all relates to Shadowlands.

What does the Legion have to do with Frostmourne and Torghast?

Along with the Helm of Domination, Frostmourne was supposedly forged by the Demons of the Burning Legion and used by Kil’jaeden as part of the torturous process of creating the Lich King from the soul of the Orc Elder Shaman, Ner’zhul. After flaying Ner’zhul’s body apart, Kil’jaeden trapped his soul in the Helm and placed it, along with the runeblade, within a cask of pure ice called the Frozen Throne before hurling that object into Icecrown Glacier.

Recently, we’ve been told that both Frostmourne and the Helm of Domination were in fact crafted at the Forge of Domination atop Torghast. What we haven’t been told is how this came about. Did the Legion somehow manage to breach the Maw and forge the Helm and runeblade? How did they get in and out, if this is the case? Is it possible they could have done this without the Jailer’s tacit approval at the very least? Or did the Jailer order the blade and Helm forged and arrange for them to somehow come into the possession of the Legion? These are questions we do not yet have the answers for, but we do know that Kil’jaeden unquestionably did possess Frostmourne and the Helm, did use them to create the Lich King, and did hurl the Frozen Throne into Icecrown as part of the Legion’s second major invasion of Azeroth, during the period between the Second and Third Wars.

However, Ner’zhul’s spirit was not a willing servant of Kil’jaeden. How he learned that this would work is as yet unknown, but he managed somehow to thrust Frostmourne out of the Frozen Throne and arranged for it to be placed in caves north of Dragonblight, where he planned for young Arthas Menethil to be led to discover and use the blade. Upon finding the sword in the caverns that now bear its name, he discovered a fateful inscription: Whomsoever takes up this blade shall wield power eternal. Just as the blade rends flesh, so must power scar the spirit.

Arthas ignored this inscription, took up the blade, and in an instant the young Paladin was no longer there, his spirit scarred, his visage transformed. Now a Death Knight, dedicated to the destruction of everything he’d once loved and sacrificed himself for, Arthas then moved to destroy Lordaeron on the behalf of the Burning Legion, eventually going so far as to raise the Lich Kel’Thuzad and summoning Archimonde to Azeroth.

It was also during this time period that he killed his own father, Terenas Menethil, and eventually struck down Uther as the Paladin, Arthas’ former mentor, attempted to defend the urn that held Terenas’ ashes. 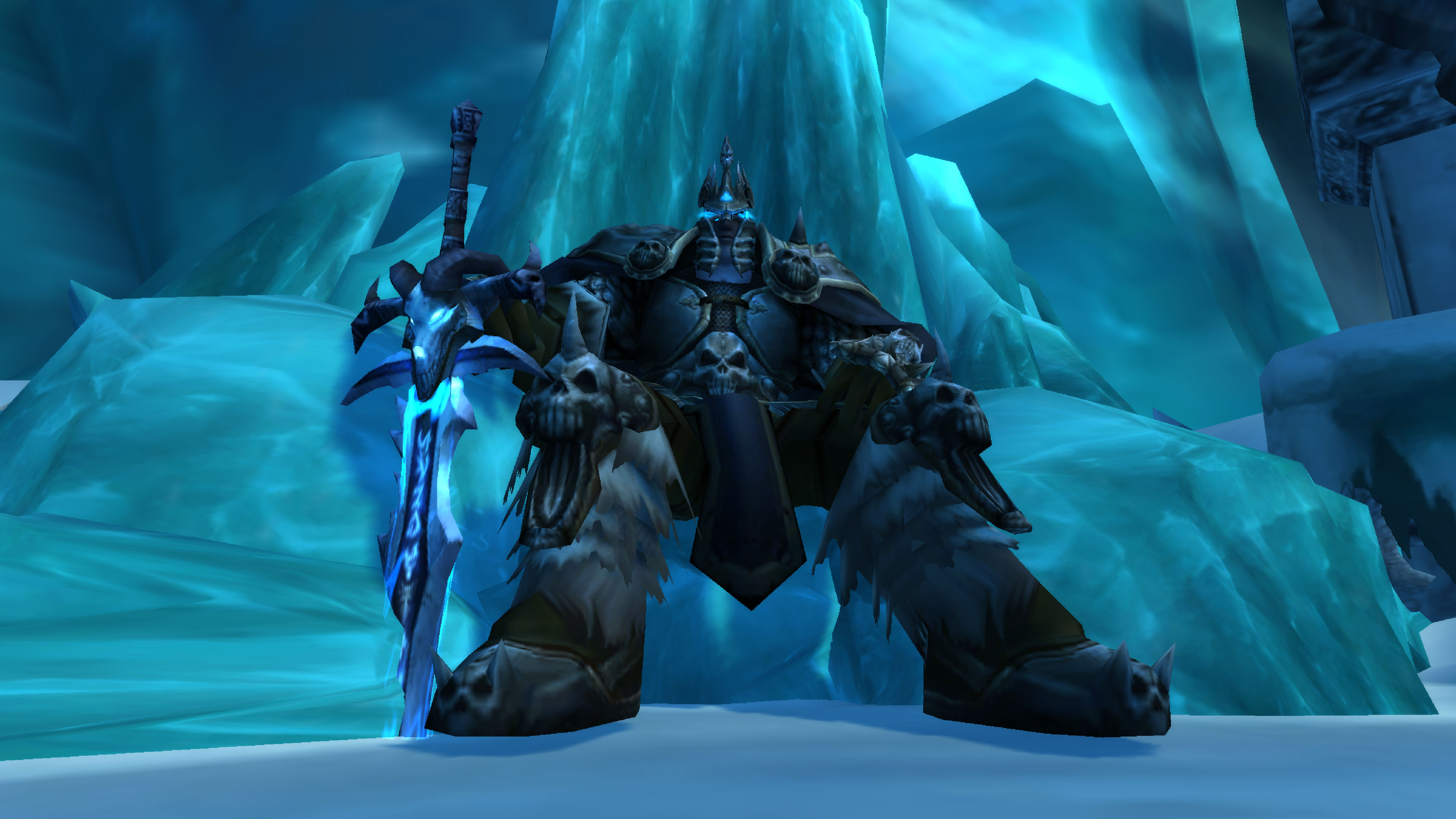 What is the Lich King’s connection to the Maw and the Jailer?

But neither Arthas nor Ner’zhul were loyal to the Legion. As soon as Archimonde had stepped through, he dismissed Arthas and took personal control of the Scourge and all the other Legion forces, leaving the young Death Knight free to engage in the Lich King’s true mission — to sabotage the Legion and become free from Kil’jaeden’s control. Indeed, it’s debatable how much Kil’jaeden ever controlled Ner’zhul, but it’s not in question that Arthas moved to lead Illidan Stormrage to find the Skull of Gul’dan and consume the artifact’s power, becoming the half-demonic entity we know him as today.

Once the Legion failed atop Mount Hyjal, Arthas quickly moved to reclaim Lordaeron as a power base for his master. But time was short — by thrusting Frostmourne from the Frozen Throne, Ner’zhul had caused his own power to bleed out of the icy prison that held him but also kept him intact. Arthas soon found himself under attack from former servants no longer loyal to him such as Sylvanas Windrunner, and with the aid of Kel’Thuzad (who had always been privy to the Lich King’s plans to betray the Legion) made his way to Northrend. A confrontation with Illidan left the Demon Hunter nearly dead, wounded by Frostmourne, and Arthas would then climb the spire and smash open the Frozen Throne, placing the Helm of Domination atop his own head and becoming the Lich King.

Uther’s vision in Afterlives: Bastion of his own death does not show the Helm of Domination because he never saw Arthas wearing that in his lifetime. Uther was already dead by the time Arthas placed it atop his brow, but he did use Frostmourne to kill Uther. The wound in Uther’s soul inflicted by the runeblade, the connection that Devos saw between the runes on Frostmourne and the Maw, these were not known at the time. But we know them now. And that leads us to ask — how did the Legion gain these items? How did they make themselves a Lich King? What is the connection between the Lich King and the Maw?

Helya, Odyn, and piecing it all together

We don’t know the answer to these questions. We don’t know, for example, if the same wound we saw inflicted on Uther’s soul when he was struck down by Frostmourne was inflicted on Arthas’ soul when he took up the runeblade in the first place. Is that part of what Frostmourne does? Or was it specifically Uther’s connection to the Light, and his prayer to it, that caused him to seemingly be torn apart into two souls? Did Illidan or Sylvanas or others killed by Frostmourne suffer a similar injury? Is it Frostmourne that broke the Machinery of Death or allowed for the first crack in the seemingly inescapable barrier between the Maw and Azeroth?

We know that Sylvanas made the first connection to the Val’kyr when she flung herself off of Icecrown Citadel. We know the Val’kyr were originally the creation of Odyn, who used knowledge gained from the Shadowlands to force Helya to undergo the process originally. We know that the Lich King somehow knew how to make Val’kyr, and we now know thanks to Devos that Frostmourne drew on the power of the Maw — the same place where Helya first sought out a spirit to grant Odyn the power he sought to pull souls back from the land of the dead and place them in new bodies. This seems to corroborate Devos’ shocked exclamation that Frostmourne and the Helm of Domination draw upon the power of the Maw — that the Lich King has from the first been using the power of the Jailer himself, somehow.

But we don’t know a lot. How’d the Legion get their hands on these artifacts? Who made them? If it was the Legion, how? If it was the Jailer, or one of his servants, how’d they end up in Kil’jaeden’s hands? Was the Lich King even his idea? Or did the Jailer want a bridge between Azeroth and the Maw? Why is the Jailer called the “Banished One” by Herald Dalora? There’s much we don’t yet know, and hopefully we’ll find out during Shadowlands itself.

Blizzard Watch is made possible by people like you.
Please consider supporting our Patreon!
Filed Under: Arthas, Arthas Menethil, Devos, Frostmourne, Kel’Thuzad, Kil’jaeden, Ner’zhul, Sylvanas-Windrunner, The Forge Of Domination, The Helm Of Domination, The Jailer, The Lich King, The Maw, Torghast, Uther The Lightbringer
Advertisement