We’ve been getting more dribs and drabs of potential lore from datamining and players in the Shadowlands beta, and I wanted to focus on one line we’ve gotten from The Other Side dungeon, and how it feeds into what we’ve already seen from the Maw starter experience.

Unsurprisingly, there are Shadowlands spoilers below.

This particular line is said by Mueh’zala, the end boss of the dungeon, and it’s pretty important.

It be Mueh’zala who brought Helya to the Jailer’s side! Struck a deal for old Odyn’s eye, and made the banshee Warchief with a whisper.

There’s a lot to unpack here. The implications are pretty significant. For starters, the origin of the Stormforged and the Val’kyr come from a deal Odyn made with a spirit of the Shadowlands, one summoned for him by Helya. Odyn traded his eye to that spirit for the power to create Val’kyr who would travel into the Shadowlands and return with the souls of worthy warriors, a plan which horrified Helya so much that she begged Odyn not to do it. In return for all of her loyal service over the years, Odyn killed Helya and used the power he’d traded his eye for to transform her into the first of the Val’kyr. 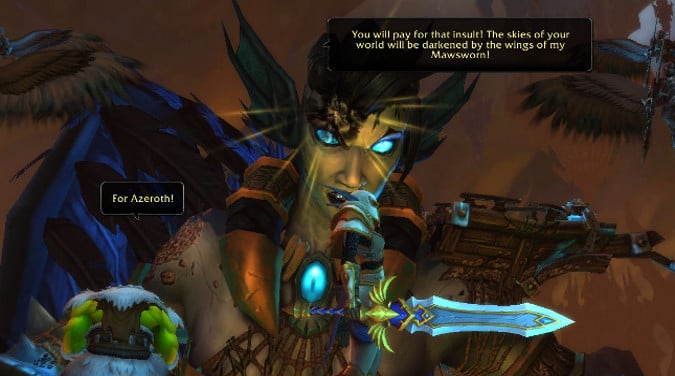 Mueh’zala’s statement above would seem to indicate that all of it — the deal with Odyn, the trading of Odyn’s eye — was part of the Jailer’s plan from the beginning, and that it was Mueh’zala who made the deal with Odyn. This would mean it was Mueh’zala that Helya summoned for Odyn in the first place. And it implies that the reason Mueh’zala made that deal was to bring Helya over to the Jailer’s side in the first place.

Considering that Helya was the one who helped Master Ra — or Ra-Den, if you prefer — create the prisons for the Elemental Lords in the Elemental Planes, it’s not implausible that Helya was the prize all along. Her ability to create planes is well attested to — she created the pocket plane that held Odyn’s Halls of Valor, her own plane of Helheim, and she certainly knows enough of how to breach planar boundaries to be of use to the Jailer. We’ve seen in Shadowlands that Helya is even more dangerous, however, because of her long experience as a Val’kyr — she seems able to corrupt the Kyrians into Mawsworn, who she is using to corrupt Bastion at the behest of the Jailer.

If Mueh’zala was the one who made the deal with Odyn, and he did so for the Jailer, that means the current situation is part of a plan thousands upon thousands of years in the making at the least. It also means that Mueh’zala somehow had the information Odyn needed to learn to create Val’kyr, and it implies that the power behind the Kyrians — perhaps the First Ones that the Jailer himself mentions when we escape the Maw — is related to the power Odyn draws upon as a Titan Keeper. After all, Mueh’zala showed Odyn how to reach into the Shadowlands, but he didn’t grant him the power to do it. And this would be of great significance, because it would imply that the Jailer had to make use of someone empowered by a Titan — or perhaps a Titan themselves — which would explain why he seems to want to claim Azeroth’s world soul.

Have the Jailer’s plans been in motion for this long?

That would make Helya, a Titanforged sorceress with extraordinary knowledge of the planes, how to shape and create them, a great prize for the Jailer’s armies. Her knowledge of planar boundaries could allow for their breach. Her experience as a Val’kyr empowered by Odyn could allow her to corrupt the Kyrian and add their ability to ferry souls to the Jailer’s arsenal. And Odyn’s eye itself could be a very significant prize, as having possession of it could allow Mueh’zala, or the Jailer himself, to see through Odyn into the world of Azeroth and keep track of things. As Odyn could see into the Shadowlands, so too could the Shadowlands see through him.

We’ve also seen in the Maldraxxus short that the Legion seems to have been involved in attacks on the Shadowlands themselves, and the Necrolords returned the favor in kind, implying that the Shadowlands weren’t as inviolate from outside interference as we might have hoped. This could also mean that the Jailer made some kind of deal with the Legion, which would explain why it was Helya that stole Illidan’s soul in Legion. Perhaps she did that because the Jailer told her to — either on behalf of, or to double-cross, the Legion and prevent Sargeras from possessing Illidan’s body. For all we know, it was when Sargeras killed the World Soul of a Void-corrupted world that the Jailer first discovered that he could use the World Soul of a Titan and that’s why he seems to be after Azeroth’s soul now. That may well be what caused him to send Mueh’zala to make the deal with Odyn and gain Helya’s services.

We don’t know, but it’s clear that the Shadowlands have been a lot closer to our world than we’ve realized for a long time now. Helya’s role as the force behind the Mawsworn seems to be a key part of the Jailer’s plans, and the meeting between Sylvanas and Helya in Legion looms ever larger knowing that Mueh’zala was behind Sylvanas’ ascension to Warchief as well as Helya’s role in affairs. Did Sylvanas and Helya deliberately engineer Helya’s death so that she would be sent to the Maw, where she could serve the Jailer directly and start to corrupt the Kyrian? Hopefully we’ll find out soon.

Blizzard Watch is made possible by people like you.
Please consider supporting our Patreon!
Filed Under: Helya, Mawsworn, Mueh’zala, Odyn, Shadowlands, Sylvanas-Windrunner, The Jailer
Advertisement