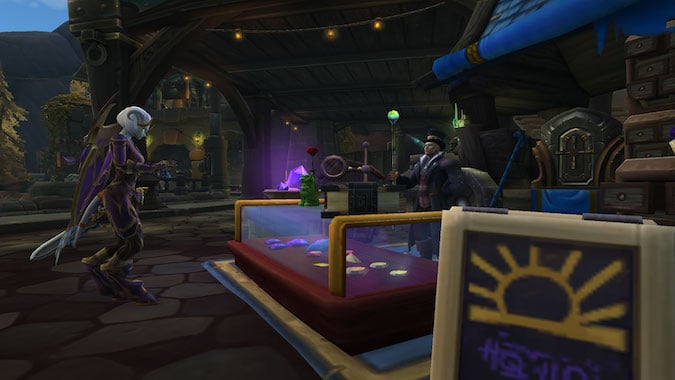 One of the things that’s been a big part of gearing in Battle for Azeroth is randomness. Whether you love or hate that, things like Corruption, Titanforging, and sockets on gear as a random factor have been part of the game this expansion, and that’s something that Shadowlands will be reining in to a degree. But as a result, some thought had to be given as to what to do about sockets on gear the coming expansion. That’s because sockets make gems more appealing, and gems are a big part of the Jewelcrafting profession and the economy as a whole. We’ve seen how removing or greatly limiting items in this way hurt Inscription — which still hasn’t really recovered — so it was clear that if random sockets on gear were to be removed something would have to be done to keep sockets, and thus gems, present for players.

Ion “Watcher” Hazzikostas, the Game Director of World of Warcraft, has recently done a Road to Shadowlands post and in it he discusses what’s going to happen to sockets on gear. There are a few things we discover here, and one of them is the idea that you’ll be able to get your gear socketed yourself, while another is the fact that in Shadowlands, the specific gear that has sockets is more limited in scope. But there still will be random sockets on gear — they’re not removing sockets as a random item property the way they are Titanforging.

While we eliminated Warforging and Titanforging in Shadowlands , with the goal of increasing clarity and player agency over rewards, the question of how to handle sockets was not quite as clear-cut. A certain critical mass of sockets across all player gear is essential to support Jewelcrafting as a player profession, and in recent expansions the chance for any endgame item to upgrade to a socketed version gave players of all playstyles the opportunity to interact with the Jewelcrafting tradeskill. At the same time, sockets unquestionably constitute power, and can be every bit as impactful as Warforging.

Trying to balance these considerations, the approach we’ve settled on for Shadowlands is to keep sockets as a random item property, but to allow players to add sockets to their items via a consumable sold by Ve’nari in the Maw (similar to Gouged Eyes in the recent Visions of N’Zoth update). This way all players can take advantage of gems and seeing a socketed item drop offers a short-term efficiency advantage, but in the long run competitive players can still make steady progress towards a best-in-slot gear setup without relying on an additional layer of randomness. Finally, in order to limit the total impact of gems, and the power gap between players with full sockets and those without, in Shadowlands only Helms, Rings, Necks, Bracers, and Belts can have a socket randomly generated or added by Ve’nari. These changes should all be active by next week’s Beta update.

The one thing all the above topics have in common is that they have been driven by your passionate feedback throughout the development process, which has helped shape the game for the better over the course of the past year. And a special thanks to all the testers reporting bugs on Beta – we’ve already fixed thousands of issues based on your reports, and are continuing to work through those reports as we aim to make Shadowlands the best experience it can possibly be when it arrives on October 26.

You can only bedazzle certain items with gems

Ve’nari, the NPC in the Maw who will be selling the item that allows you to socket a piece of gear, will be following the same rules as the random socket property — the items you can socket and the items that will have sockets randomly are the same. A randomly socketed item is a nice bonus but won’t be something that will force you to grind WQ or run the same dungeon or raid boss over and over again to get your socketed BIS item. If that one Helm, Ring, Neck, Bracer, or Belt item didn’t drop with a socket, instead of desperately trying again and again to get it, you can just do the Maw and eventually buy that socket you need.

I’ll personally miss sockets on other items — I have fond memories of sockets on Tier Gear pants, because they had like three sockets apiece and it was pretty great to customize your gear. But I understand the goal here — Shadowlands is already changing how secondary stats scale on gear, so an active attempt to control how much you can boost yourself with gems instead of letting you just staple sockets on every single piece of gear you own makes sense. This approach should allow for Jewelcrafting to still stay relevant without making players desperately hot glue sparkly rocks to every inch of their character in an attempt to eke out that extra bit of power.

Although I have to admit I remember the days of Kael’thas attempts in The Eye with my Warrior sticking tanking gems into every available socket on my gear with a touch of fondness, it’s probably best to rein that in a touch. I must have been blinding to look at.