What Hearthstone could learn from the Mastery system in Legends of Runeterra: Empires of the Ascended 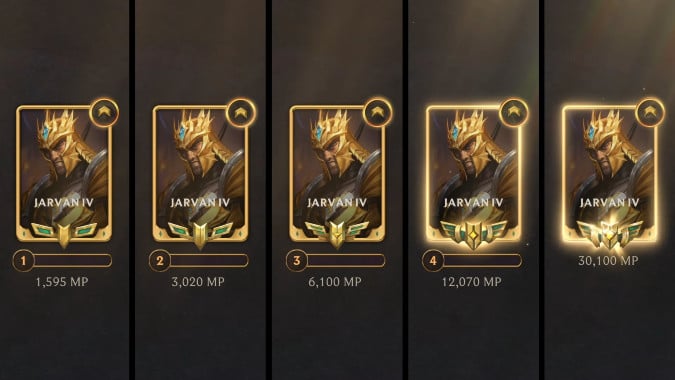 Empires of the Ascended, a new expansion for Riot’s Legends of Runeterra digital CCG, is being released tomorrow. It brings a new Region (kinda like a new class in Hearthstone), as well as a whopping four new keywords, 110 new cards, and a new in-game event with many cosmetics. But one of the most exciting features from this particular expansion release is the Mastery system, which lets you “evolve” your Champions — which are akin to Hearthstone Legendaries, and the cornerstone of LOR gameplay — showing your dedication to them. As you use your Champions in matches, they gain Mastery points, and eventually “evolve” in their card art, as seen above.

Riot developer Jeff Jew has stated that this system could be expanded in the future: Besides those changes in the card frames for your Champions, they might also get even more cool new effects, like unique emotes, so the Mastery system may be the start of a host of new customizations. There are also strong indications that the next Runeterra expansion — which will be released on May 2021 — will add Champion skins to the game. This would be very par for the course, since those are the same Champions from Riot’s major title, League of Legends, and in that particular game, Champions already have a multitude of skins that players can purchase and show off.

If those rumors are true, Champions in LOR will be getting an enormous amount of customization, both in their Mastery — obtained by playing them — and in their skins — which would probably be purchasable in the in-game store. 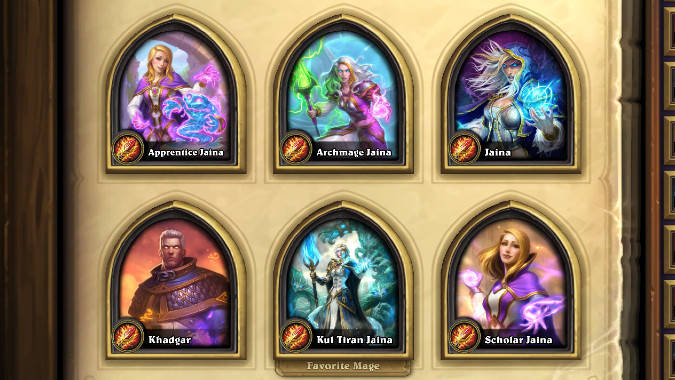 Hearthstone could learn a lot from from Runeterra’s evolving Champions

Hearthstone has a known lack of potential collectibles — so much so that they needed to come up with skins for The Coin in order to add more rewards for the Rewards Track (in what was probably the least exciting idea in the history of video games).

The screenshot above is from my own hero collection. If you ignore the Khadgar, you might notice that I currently own five variations of Jaina Proudmoore. It’s an evolution of a sort: you earn several variant skins for Jaina and Thrall from the Rewards Track, giving you a multitude of variations for those two characters. It’s a little excessive. Most hero skins are self-contained, completely separate from all others, but now everyone progressing through the Rewards Track has five versions of Jaina and Thrall.

Hearthstone already has a framework for a different way to earn variant hero portraits — and it’s much better than progressing down a Rewards Track because it offers rewards linked to progression, that let you show off how good you are through cosmetics. Your default Hero portrait already evolves once you earn 1,000 wins with a class, which could be a great way for Hearthstone players to show off their skills. But the implementation for that particular reward is… also not very good.

Sure, it’s very cool to earn that Corrupt Garrosh portrait if you net 1,000 wins as Warrior. But then which Hero skin do you use? Do you feel forced to always use your Corrupt Garrosh, to show off your accomplishment — forever locking you out of using any other Warrior skins, such as Magni or Annhylde? There’s a similar problem when players obtain the Legend card back — if they want to show off their achievement, they can’t use any other card back, ever again.

But rewards that evolved as we progressed — like Runeterra’s Mastery system — could let us show off our progress without requiring us to use one specific skin forever. 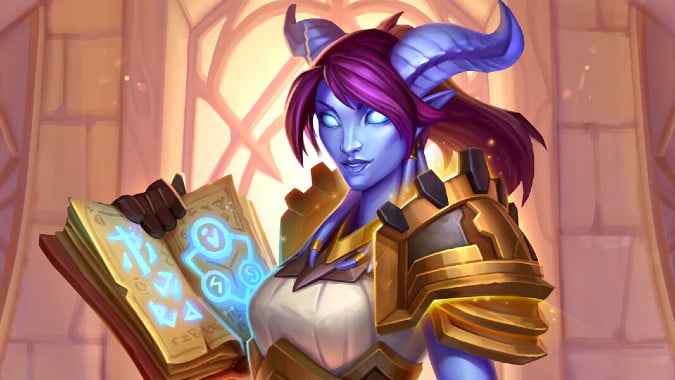 Evolving rewards would always let you show off your achievements

What if, instead of all those jumbled systems, Hearthstone implemented a single, robust system — that could be similar to what Runeterra’s done — and allowed you to evolve any Hero skin? What if your reward for earning 1,000 wins with your favorite class was some sort of special badge of honor that you could always display, while still being free to pick the skin you wanted?

And there’s even more potential for cosmetics within this same system. In LOR, the Mastery system and the potential hero skins apply to the Champions — in Hearthstone terms, these are more like Legendary cards than Hero portraits. Which means that Hearthstone could potentially do both of those things: having evolving Hero portraits and evolving Legendaries, letting you show off your achievements in multiple places and ways.

Imagine if, by playing your favorite deck archetype a lot, you could get to evolve the Legendaries from that archetype. Enjoy playing Pure Paladin? Get enough wins, and eventually, your High Abbess Alura could get different art! A different border that is much shinier! A different animation when it hits the board! Different voice lines!

The sky is the limit here — and I guarantee that these kinds of rewards would be far more exciting than getting a new Coin skin.

Blizzard Watch is made possible by people like you.
Please consider supporting our Patreon!
Filed Under: Legends Of Runeterra, Riot, Riot Games, Runeterra
Advertisement