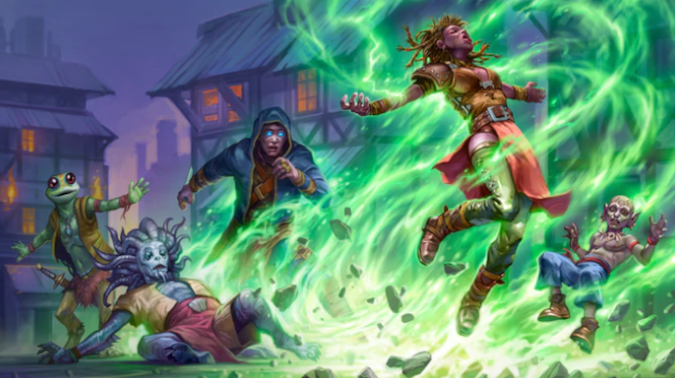 Kickstarter has become one of the biggest ways to promote self-pub or small publisher TTRPG projects, and the latest project from Chris Metzen’s Warchief Gaming has proved the power of an established creator with a fanbase, because Auroboros: Coils of the Serpent has been out for almost a day and it’s made almost $550k US as of this writing — solidly eleven times its funding goal of $50,000. With at least 4500 backers at the moment, that means the average backer has signed up for around $125, which may not sound like much, but it hits the Collector’s Edition tier on the Kickstarter, which is very impressive. It’s not likely that every single backer pledged exactly $125, so some probably went even higher to the $200 Epic Adventurer’s Bundle, which includes dice, a DM’s screen, full hardcovers, and more.

To put it another way, the Kickstarter has hit nine of its stretch goals — and will almost certainly hit the tenth before the end of the day tomorrow — with 30 days left on the project. That will leave them with only one more stretch goal to hit, only $50k to reach that stretch goal, and 30 days to get that done. That’s exceedingly successful for a TTRPG campaign setting on Kickstarter.

Kickstarter has become a very popular destination for TTRPG projects. Recently, the all-Native American Coyote and Crow TTRPG managed to hit over a million dollars from a goal of $18k, and the Odyssey of the Dragonlords 5e book made $456k out of a $50k goal  — like Auroboros, that book was created by people with long history in the Computer Role Playing Game field. But hitting half a million the first day on a mere 4500 backers is doing extremely well, and it’s on track to hit over a million by the time the project is over.

Doing so well means that there’s an extremely good chance that this book will be published and could even be sold in brick and mortar TTRPG stores. While actual print on demand works fine for a lot of Kickstarter projects like this, getting eleven times their funding goal on day one alone frees up a lot of money for things like the various stretch goals, and gives you a leg up on future projects. If this one manages to satisfy player expectations, we could see Warchief Gaming use the Onyx Path model — they do almost all of their projects through Kickstarter now. Not all RPG Kickstarters do crazy high numbers like this, but just managing to get double your funding goal is great because it means you know there’s money there to do your project.

A lot of this is on the strength of Chris Metzen’s work over the years for Blizzard, of course. I mean, Mickey Neilson is writing an introductory story for the Collector’s Edition, who used to be at Blizzard as well. It’s hard for other companies just getting onto Kickstarter to compete with from the guy who helped make StarCraft, Warcraft and yes, Overwatch in terms of getting backer interest. Now, of course, they’ll just have to deliver a project that’s okay with carrying this kind of fan expectation. No matter what, blowing past your funding goal by a factor of eleven in the first day? That’s a problem everyone in the field would love to have.

You can pledge to the Kickstarter here, or just go and check and see how high they end up getting, which I expect by the end of 30 days might just come close to that million dollar mark. The setting seems fascinating, with all new subclasses, races such as the adorable Salamar, and the strange Mark of the Serpent system for empowering your characters while also dangling the carrot of corruption in front of them like a Mournblade in the hands of a former prince of Lordaeron.

Blizzard Watch is made possible by people like you.
Please consider supporting our Patreon!
Filed Under: Auroboros, Auroboros Coils Of The Serpent, Chris Metzen, D&D 5e, Warchief Gaming
Advertisement