What is the Radiant City in D&D — and what does it mean for the D&D multiverse? 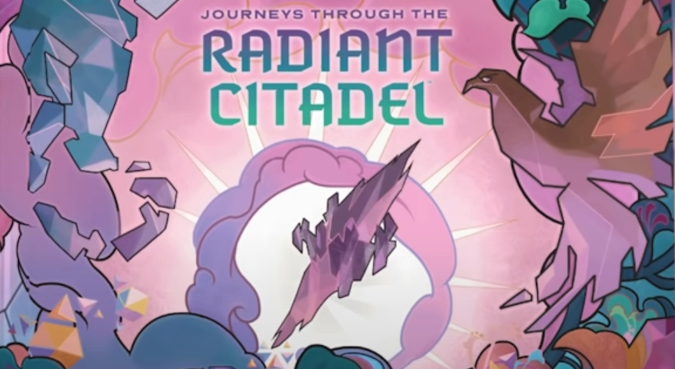 One of the fun things about Dungeons and Dragons is its plethora of amazingly weird cities that exist to foster adventures across the planes. The Efreeti city Dis, the City of Brass in the Plane of Fire, the Astral Fortress city Tu’narath, home of the Githyanki, of course Sigil, the City of Doors floating above the spire in the center of the Outlands — these cities give us exotic locations to adventure to, and also serve as gateways to myriad other places.

Now, in this tradition, the upcoming Journeys through the Radiant Citadel introduces another adventure hub city — the Radiant Citadel itself, the fossilized corpse of an enormous creature that wrapped itself around an enormous diamond, and was later discovered and settled by multiple different cultures and civilizations. Hanging deep within the Ethereal Plane, the Radiant Citadel is orbited by crystal shards that allow travel to various locations in the multiverse while also serving as a beacon to those lost in the Deep Ethereal.

I have to say, the idea of a massive fossil carved into a fantasy city bridging multiple realities with the Ethereal Plane allowing your D&D party to travel throughout the multiverse? This is practically my Kryptonite.


What is the Radiant Citadel?

Since Journeys through the Radiant Citadel is a collection of multiple adventures — thirteen stand alone adventures that can be set on any of the established D&D campaign settings like Eberron or the Forgotten Realms or used in homebrew settings — it deliberately allows the players to travel from the Radiant Citadel itself to one of up to fifteen locations in the wider D&D multiverse that we saw tantalizing hints about in books like Strixhaven: A Curriculum of Chaos and Fizban’s Treasury of Dragons. It’s been clear up to now that in building up its multiverse, Wizards of the Coast has been borrowing both from classic D&D settings and locations from the Magic the Gathering TCG, and now the Radiant Citadel provides evidence that they are also willing to invent brand new lore never before seen to help create links between all of these worlds.

That’s exactly what we’ve been seeing in current releases. Wild Beyond the Witchlight and Van Richten’s Guide to Ravenloft took steps to anchor new places in the planes into the current cosmology, with Ravenloft and the Domains of Dread as part of the Shadowfell and the new Domains of Delight existing within the Feywild. Then Mordenkainen’s Monsters of the Multiverse did much the same for monsters and even playable races, expanding those options, and we’ve seen with various Unearthed Arcana playtests that settings like Dragonlance’s Krynn and the Travelers of the Multiverse UA which brought back races from Spelljammer, Dark Sun and even the old Star Frontiers game.

But the Radiant Citadel is brand new — it’s not Sigil, or Tu’narath, it’s a whole new city with multitudes of cultures, created by POC authors who draw from their own cultures and life experiences to craft a multicultural city linking to many disparate worlds. This is the first real sign that Wizards of the Coast is planning on doing more than just using the multiverse concept as an umbrella to cover all of their currently existing content. It shows that they’re going to be bringing in entirely new settings as well, and that’s really exciting.

Journeys through the Radiant Citadel will be available on June 21, and is now up for pre-order.  And it definitely feels like the first step into a new conception of how the cosmology of D&D’s multiverse works, and a new location to explore it with and through.

Blizzard Watch is made possible by people like you.
Please consider supporting our Patreon!
Filed Under: D&D Campaign Settings, Radiant Citadel, Wizards Of The Coast
Advertisement