Sepulcher of the First Ones will allow cross-realm Mythic raiding in patch 9.2.5 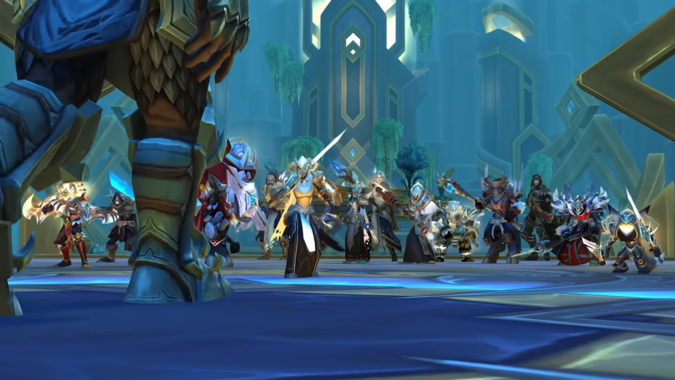 Mythic raiders in Sepulcher of the First Ones will soon be able to join their friends across servers. Starting in the upcoming patch 9.2.5, Warcraft developers are flipping the switch to let raiders join any Mythic run no matter what server it’s hosted on.

With this change, and the cross-faction grouping that is also coming in patch 9.2.5 now raid leaders will have their pick of the litter to choose from. Of course, there’ll still be the usual Mythic difficulty lockouts preventing people from hopping around too much — those aren’t changing.

This change does come a little earlier than people were expecting though. For the past two expansions, cross-realm Mythic wouldn’t unlock until both the Horde and Alliance filled up their raiding Hall of Fame for the tier, which included the first 100 guilds from each faction to beat the final boss and get their Cutting Edge achievements. Alongside the usual title for defeating the boss, guild members would also unlock fancier titles that identified they were part of the first kills worldwide.

Tieing cross-realm Mythic raiding to the Hall of Fame wasn’t a very popular move though. The number of high-end raiding guilds is much higher on the Horde side of the faction divide. In the Sepulcher Hall of Fame, the Horde has had their list filled since May 11. Currently, there are only 18 Alliance guilds in the Hall of Fame for Sepulcher.

The Hall of Fame feels like it was intended to be an incentive for some Horde guilds to consider faction changing over to Alliance so that they could compete for a shot at the glory of being in the top 100. After two expansions worth of raiding, we can see that it hasn’t really had that impact at all. The Alliance faction has only ever had 10-20 guilds on the list by the time the Horde has hit 100. With Sepulcher of the First Ones being the worst showing so far at only nine names on the list when the Horde filled theirs.

Blizzard developers have always defended the decision to restrict Mythic raiding to just your server at the launch of the raid. In the past stating that they wanted to ensure that people had a reason to form guilds still, and try and build a server community that way. Raid leaders have seen it differently though.

With Mythic difficulty balanced around having 20 players in the raid, it can be a lot easier to fill a couple of slots if you have some unplanned absences. All of a sudden you can bring friends from off-server, or even random players through the group finder to your run. Nothing felt worse than trying to organize a full 20 players into a Mythic raid only to be short one or two bodies. You’d make the fights much harder without the full complement, and usually wind up calling the raid off for the night. Nobody would be having fun then.

I hope that this change will see a return to the drawing board for locking cross-realm Mythic behind the Hall of Fame in Dragonflight.