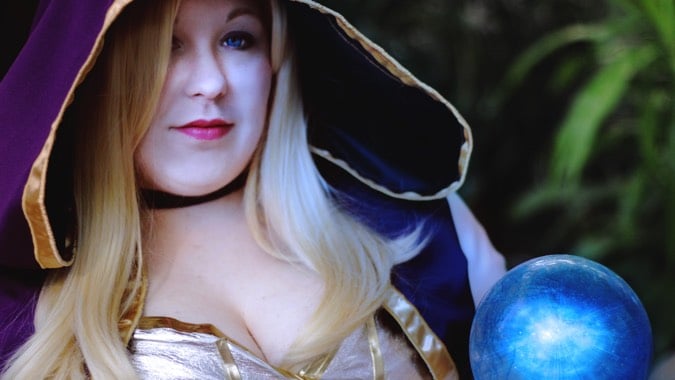 BlizzCon may seem like it’s still far away, but it’s not that far away if you’re a cosplayer wanting to join the Blizzard-centric costume contest of the season or just dress for the occasion. To be ready for that November deadline, BlizzCon cosplayers are already hard at work planning and designing their projects for the year… at least if they hope to avoid last-minute all-nighters trying to finish those last details before hitting the convention floor.

So we decided to check in with some of our favorite Blizzard cosplayers to see what they’re working on and find on how they bring characters to life wherever they go. Today, we caught up with Serephita, whom you probably know best for her portrayals of Warcraft‘s Jaina Proudmoore. She’s already working on a new version of Jaina to bring to BlizzCon this year, so we chatted about gaming, cosplay, and, of course, BlizzCon.

What Blizzard games do you play, and as what?
I play World of Warcraft, as both a Resto Druid and Fire Mage, although I have one of almost every class that I level casually. I also love playing Diablo, and have a level 70 wizard, and a few alts that I like playing. StarCraft 2 I play Zerg, and of course Heroes of the Storm. I love playing Sylvanas and Jaina, although Kael’thas is fun as a fire mage.

Which Blizzard characters have you cosplayed? Do you have a particular favorite?
I’ve cosplayed Jaina for BlizzCon 2013, ALA, and Katsucon 2014, and one of my night elf Druids for BlizzCon 2014. I (obviously) love cosplaying Jaina, she’s a character who I keep returning to time and again.

How long have you been doing cosplay?
I’ve been cosplaying since 2007. I started with Slytherin robes for the release of the final Harry Potter book.

What’s the most challenging part of taking a video game character and bringing it to life with cosplay?
Sourcing the materials, and finding a balance between budget and accuracy, for me. I don’t have much experience with armor, so making that is always a bit of a challenge for me. 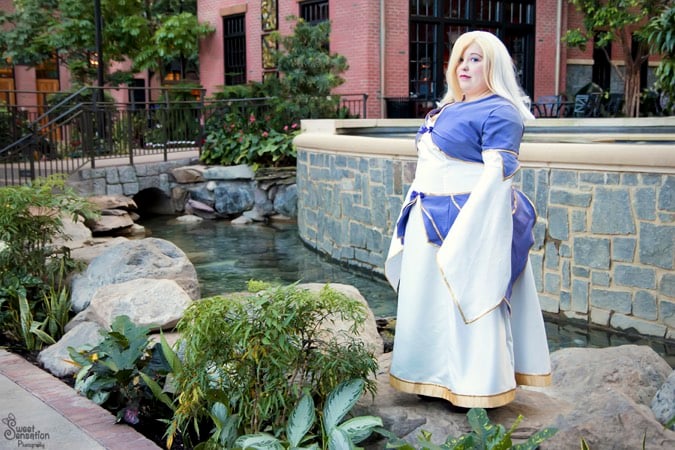 Could you walk us through the process of making a new costume, from idea to completion? How long does a costume typically take to put together?
Sure! When I start, I always try to look at the costume from all angles, which is where the 3D model viewer comes in really handy, especially for Warcraft characters. I then break it down by pieces, looking where seam lines might go in real life, and think about which fabrics might work well, based on how the garment falls and flows, and if there’s any texture to it.

I’ll do my own sketches of each layer, making notes of what fabric I might want to use, then color it with colored pencils. I also keep a binder handy filled with swatches of fabric from some of my favorite stores and websites, so that I can look at them for easy reference, and see if the colors and fabrics I have in mind will work together, or if I need to change them.

Then I start looking at patterns or drafting my own using the draping method. This will sometimes take three or four attempts, so I try and make sure I have either lots of muslin or some cheap quilting cotton on hand, which makes it easier. Once I have a mock up I’m happy with, I’ll begin looking at the actual fabrics I want to buy, and order those along with any trims, shoes, wigs, etc. I always end up tackling the main portion of the garment first, then the accessories if there are any, and shoes. Sometimes I’ll rotate between the three so I don’t burn out.

The last thing I always work on is the wig, which is why most of my costumes have minimally styled wig requirements.

Are you heading to BlizzCon this year to cosplay?
I am indeed! I’m going to be cosplaying Battle Mage/Kirin Tor Jaina, designed by my friend Frenone.

Do you have a favorite event to do cosplay at? Why?
BlizzCon! It’s a huge event for me, where I get to nerd out with other Blizzard fans who cosplay, and hang out with most of my friends who I don’t get to see at other events during the year. Everyone brings their A Game, and it’s fun hearing about the challenges and different methods everyone went through to get their costume finished.

What are you working on right now (or next)?
Next I’ll be starting my BlizzCon costume, as well as a few other projects for a convention in October of this year — Euphemia from Code Geass and Saber from the Fate series.

Blizzard Watch is made possible by people like you.
Please consider supporting our Patreon!
Filed Under: Arts And Crafts, Blizzcon, Cosplay, Interview, Jaina, Serephita
Advertisement