Today’s column is dedicated to new players or players looking to progress further in Hearthstone without much of a collection begin with. Whether you’re new to the game or just not quite sure how to get started, the goal is to develop your card collection through the different quests so that you can participate in different game modes against live players and partake in weekly Tavern Brawls.

General deck building advice can be found here. If you’re looking for deck ideas, Hearthstone Players has a great list of decks for each class if you have access to Blackrock Mountain and Naxxramas. If you don’t have those adventures unlocked yet, that’s okay! Here are some decks featuring only basic cards from all the classes.

Actual gameplay advice is going to vary based on the classes you’re using but there are certain generic key concepts that will serve you well.

There are a number of different ways to play Hearthstone — but if you’re just getting started, you’re probably most interested in playing casual or solo adventures.

Gold is one of the primary currencies in the game for purchasing packs, obtaining entry into the Arena, or unlocking different wings on different Adventure Modes. Card packs cost 100 gold and  contain 5 cards, of which one is guaranteed to be rare quality or better. It’s possible to receive different combinations of cards. You might receive the same two commons or receive three different legendary cards in one pack. Most of your gold will come from completing your daily quests and you’re going to want them to help you open up Adventure Modes and purchase card packs. Individual Adventure Mode wings can be unlocked for 700 gold. 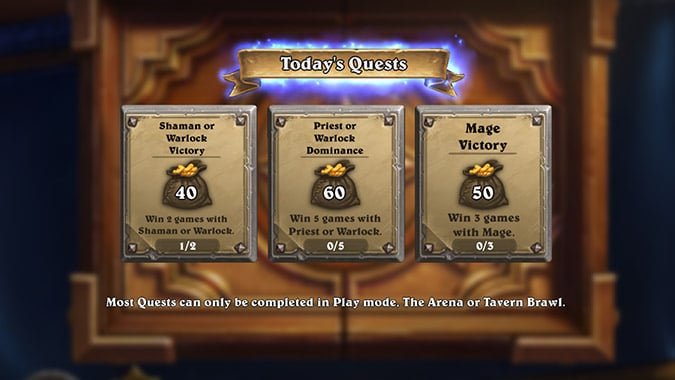 The first thing you’ll want to do after completing the introductory tutorial mode is to unlock all of the classes. Use this time to get accustomed to the different classes and to the basics of the game. Not only that, start thinking about a particular class that you’ll enjoy playing. All class basic cards will be unlocked the moment you bring it to level 10. In fact, you’ll want to play all classes to level 10 so that you can complete both the Level Up and Ready to Go! quests. I recommend levelling up the Mage or Hunter class to level 20 first so that you can participate in Tavern Brawls and obtain the weekly free pack reward. 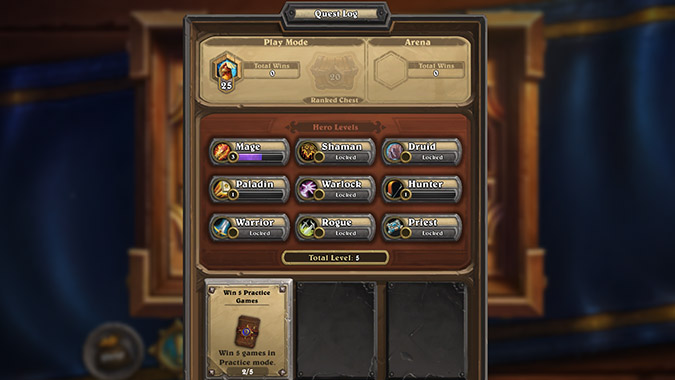 I strongly advise working your way through the following quests at some point to knock out some quick rewards which  will help with your collection.

After that, you can start using your gold to buy cards or to unlock some of the Adventure Mode wings. There are certain key cards that will benefit you greatly no matter which class or deck you wish to use. Other class exclusive cards tend to either be class staples or are used for specific decks. If you can, I suggest spending money on unlocking wings. If you’re not willing, you can use gold to open individual wings.

Here are some cards to look for from Adventure Mode:

Plague Quarter has both Sludge Belcher and Loatheb, which are excellent 5 mana minions that will serve well in most decks.

With luck, this guide will give you an idea of where to go and how to get started in the game. Hearthstone can be frustrating especially for those without a background in card games. All I can suggest is to keep sticking with it. Don’t let game losses discourage you. Either you’ll win games or you’ll learn from them.