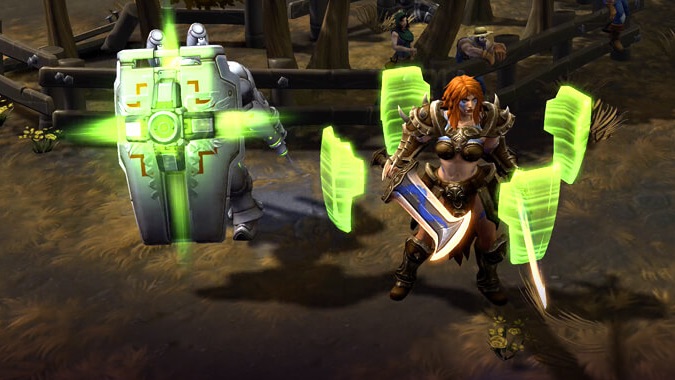 Today’s Heroes of the Storm patch brings not only a new Support hero, but a big balance pass on Warriors, new loading screen UI, and more. The highlight is, of course, the introduction of the StarCraft combat medic Lt. Morales who is making her debut as a secondary healer (check out our new guide for her).

If you preordered StarCraft 2: Legacy of the Void collector’s edition, the Void Speeder mount will now be available to you. Also, the prepurchase of any version of LotV gets you Artanis for free and a week early on October 20th. He will then be available for all to purchase on October 27th.

The full patch notes, with dev comments explaining some of the hero tweaks, after the jump.

Lt. Morales has been added to Heroes of the Storm and is now available for play! Read on for a brief overview of this new Support Hero’s Abilities.

Developer Comments: A.I. players will now choose from predetermined Talent builds instead of randomly selecting Talents. This is especially important for players who disconnect as the A.I. will now no longer randomly choose Talents, but instead try to pick builds that are closer to what players would expect. In addition, A.I. controlled Heroes in Versus A.I. games will also have their own Talent builds to choose from.

Developer Comments: Matches on Battlefield could occasionally go quite long as the Immortals weren’t scaling high enough into the late game. With this slight damage increase they’ll be more of a threat as the game progresses.

Developer Comments: We didn’t like the gameplay of Garden Terrors being used defensively to slow down an enemy Garden Terror push. Now that the Overgrowth can disable the Core, it will be much less effective to defend as a Garden Terror, encouraging teams to be more offensive with their Garden Terrors.

Developer Comments: Player feedback has been centered around how hard it is to comeback when falling behind on Infernal Shrines. We agree that the Punishers are overly punishing, so we’re nerfing their Health slightly. Teams that successfully bait the Punishers deep within their base will be able to put an end to this threat sooner.

Developer Comments: While the three temple event could be fun, it didn’t leave the defending team with many options. It almost always meant whoever had the advantage at that point in time could secure the majority of the temples and win the match with little for the other team to do.

Developer Comments: We’d like to avoid ‘current Health’ for the Savage Charge Talent, as what players get out of this can vary wildly. Using Savage Charge against a low Health target could net less than a Basic Attack, so the damage will be much more consistent with this change.

Developer Comments: Zeratul is a little bit too strong, especially at competitive and tournament level play. Wormhole remains extremely powerful, but decreasing this timer from 3 to 2 seconds will give increased counter play options to the enemy team, primarily if they can disable Zeratul during this shorter time window. Void Prison remains one of the most powerful Heroics in the game, but with the decreased range, Zeratul will now likely have to use Blink or aggressive positioning to get into place for the perfect Void Prison.

Developer Comments: Abathur’s initial Locust would previously sit idle until Minions spawned. This change will allow Abathur to get in position before the first Locust spawns at the start of a game.

Developer Comments: Nazeebo was dealing a little more damage than we’d like, specifically when looking at his spiders. We’ve tuned his base spiders and their leaping talent down to bring him more in line.

Developer Comments: It’s important that Tassadar players can queue for Quick Match and not be worried that they are going to cause a negative experience for their team. A Tassadar player who chooses the Support Talents will be much more viable as a Support character. We still expect Tassadar to put out smaller numbers when compared to the highest healing Supports, but with the huge amount of utility Tassadar brings, we think this is an okay trade off. The second change here targets Archon providing a little too much power; we’ve reduced some numbers to tune him appropriately. Internally, we’ve seen more Force Wall play as a result, which has been exciting.

Developer Comments: We think that it’s important that Tyrande has the capability to be a viable solo healer, as she might be the only Support on your team in Quick Match. Shadowstalk is generally an under-picked Heroic, so we decided to focus it more toward healing so that it can become a “support” option. Tyrande still brings less healing than some of our other Supports due to the rest of her kit, but we hope that the Shadowstalk change will bring her closer to what players expect when fulfilling the primary Support role.

Developer Comments: While we see a fair amount of Talent diversity within Chen players, we found that some of these Talents were traps, so these changes will help. We also added a bit of power into Chen’s core playstyle to help him at competitive levels.

Developer Comments: The buffs to Shadow Charge should help to reinforce Diablo as the premier gank Warrior. The rest of his kit gets a little bit of love to help his overall play.

Developer Comments: We wanted to further emphasize E.T.C.’s ability to disrupt enemies with his Face Melt and Power Slide Abilities. With these buffs, we feel he’ll fall in line as a viable main Warrior.

Developer Comments: Johanna is powerful right now, and we think a large part of her strength is due to her ability to quickly clear large Minion waves. We also felt that the stun duration on her Blessed Shield could be frustrating to play against during the mid-game. Players who are looking to get that extra stun duration back can elect to build into it at level 20.

Developer Comments: Leoric is too powerful right now. We’re targeting his Skeletal Swing, as we believe it does everything a little too well. The damage output for this Ability has been decreased overall, and we’ve reduced its strength at clearing Minion waves significantly.

Developer Comments: We’ve received a lot of both positive and negative feedback about Misha’s controls and wanted to offer a little more to our players without completely overhauling her current control scheme. We will continue to monitor this and may make future adjustments to Rexxar and Misha if necessary to balance for this increased level of control.

Developer Comments: We wanted to buff Stitches and position him to be more powerful against Mages. His regeneration build has been nerfed, due to the removal of Regeneration Master, but instead he now has a high Health build which also increases Devour’s effectiveness. His core kit was improved at a basic level, which will help bring him back into competitive play. Finally, we wanted to clean up the rules associated with Gorge and the level 20 upgrade, so we cut the unnecessary components of those two Abilities.