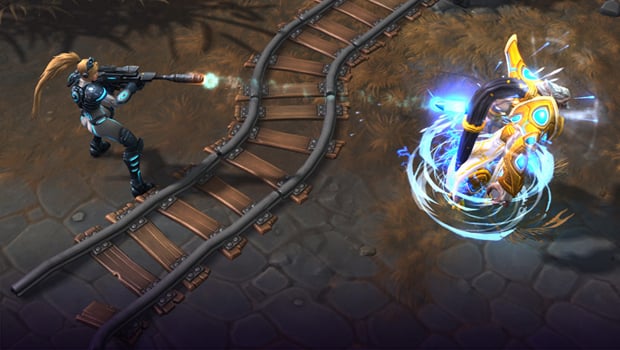 Look out Nexus, because the new Support hero Lt. Morales arrives today — alongside some pretty serious patch changes, especially for Warriors. If you’re ready to shell out 15,000 gold to pick her up, check out our guide to get a head-start on playing the Nexus’ newest arrival. But even if you’re not ready to shell out that much gold, we’ve got a good line-up this week — so read on for the list as well as our thoughts on this week’s lineup. But first, a new haiku from our resident bard, Mitch:

Now, on to this week’s free heroes:

Our team had some thoughts on this week’s free lineup:

Alex: Nova is one of my favorites even though she isn’t competitive at all and is useless at almost everything except picking off already weakened opponents. She’s extremely fun until you realize you can’t contribute to map objectives, can’t effectively cap mercenaries like other assassins can, can’t go toe-to-toe with anybody at all ever, can’t lane… you get the idea. I still enjoy playing her, but if I’m doing a quick match, I always feel bad about it. Playing her feels very selfish. In a team that knows how to prop her up and make her effective, totally different story. She needs the freedom to wander and gank, because that’s all she can do.

Anna: Funny story: I went to go look up the name of Nova’s talents because I can never remember them off the top of my head, and there’s a series of reddit threads. There are DOZENS of threads complaining about how OP she is up until a patch in January, where the tide turned and every thread thereafter with a few exceptions are about how crappy she is. Fun, but not super viable.

Alex: It became common knowledge projectiles from Triple Tap can be blocked and now Nova can’t get an instagib whenever she pleases (which then resets the cooldown on it for another free gank). So her one trick became not very impressive.

Noxy: Which upsets me.

Anna: One big sort-of mistake I see a lot of newer Novas make is choosing Triple Tap over Precision Strike. Triple Tap does help with ganks, but Nova is totally immobile when she uses it, making her an easy target, and any tank worth their salt will just body block her target while murdering her. Precision Strike gives her global presence and helps her destroy fleeing targets as well.

Alex: At this point, if I see a teammate being targeted by Triple Tap, I instinctively go to eat one of the bullets and everyone gets out of the situation just fine.

Anna: The only time it’s really useful is if she can make her way behind a keep or gate, bide her time, and destroy a solo squishy who’s standing under the keep. But even in that case, she’s vulnerable and that’s one of those situations where her team is probably off doing something more important without her.

Dan: If you need to finish a Support daily, Li Li is ezmode. Uther is a good choice also as a solid healer with a great ultimate, you just have to be ok doing melee damage for your autoattack. For Assassins, Kael’thas recently got a damage nerf, but is still very fun to play. Just remember that he is very squishy so don’t stray far from your teammates or dive after a fleeing opponent. Nova is quite fun, though she’s a one-trick pony.  For Specialist, Azmodan is one of my favorite heroes to play as his lane pushing is insane. Finally for Warriors, ETC is getting buffed today after his recent hard nerfs so you might want to give him a go and see if you like him now. Anub’arak lost his appeal for me after his recent nerf to the AI of his beetles, but he’s still a solid option with his mobility and stuns.

Alex: Azmodan is in the Early Game Bully team where it feels like he’s way too strong in the opening laning stage of the game. Like Zagara. They’re just a level above for some reason. Azmodan and Zagara can easily go 1v2 early on.

Anna: Azmodan also scales incredibly well, but only with the level one talent Taste For Blood, and only if your team affords you the opportunity to build your stacks early on. Unlike Raynor’s Seasoned Marksman, e.g. you have to get the kill in order to build your stacks, so plan accordingly.