BlizzCon 2015 is over. I wasn’t even there, but I feel exhausted by the colossal amount of new information to process. Many exciting changes are on the way in Legion. As we did after Blizzard announced the expansion, let’s look at the changes that will impact guilds next summer and what you should think about to prepare for them.

Blizzard’s new take on Challenge Modes for dungeons will center around a new item called a Challenger’s Keystone. Keystones are single use and available to each character once per week. They grant entry to Challenge Modes for a full party. I believe this system will help guilds tremendously. The new Group Finder tool has been a great addition, but it has made guilds less meaningful. Why invest in a community, some players ask, when I have the entire player base to group with? Because you can only get a Keystone per week, however, it’s a lot to gamble on a random group of players. A party of guild members that you trust and run CMs with week to week is a much safer bet.

Most significantly, Blizzard wants dungeons to be equally as relevant as raids to the endgame experience. Many players love running dungeons and prefer it to raiding. If the system is everything Blizzard imagines, guilds could spring up who are focused entirely on 5-player content and be very successful.

One of the most significant announcements for guilds was a non-announcement: for the first time ever in an expansion, raid sizes and their relative loot drops will not change. Guilds have endured an eight-year gauntlet of iterations on raiding in WoW. Most iterations have hit rosters hard, asking guilds to add or drop players to maintain their preferred raid experience. For once, the status quo will carry over. I won’t argue that the current system is perfect, but I think it’s the best version we’ve had so far. Officers and raid leaders can plan for Legion accordingly.

Another bombshell dropped on us last Saturday came from the Q&A, where Blizzard said they’d drop the two-spec restriction of Dual Specialization. Players will be able to swap among all of their class specs (even all four in the case of druids). Swapping specs became easier in Warlords with the introduction of gear that switched primary stats depending on your current spec. With Blizzard lifting the final restriction, your raiders no longer have to identify as a main spec/off-spec character. All gear will be relevant to players who can switch to that role, which will have to be accounted for in your loot system.

Some guilds may opt to keep the main/off designations. Others will want to maximize their options and let players collect for three or four roles. Each guild will have to decide what is best for their raid team.

Items such as weapons and trinkets (and in the case of tanks and healers, necklaces, rings, and capes with Bonus Armor or Spirit) still make a huge difference in your performance. Artifacts also seem like they’ll be a barrier to switching, even if off-spec Artifacts will unlock faster. It won’t be a free-for-all for specs just yet. Still, triple specs offer a huge amount of flexibility to your team that can’t be ignored.

A small but significant change announced at BlizzCon is that personal loot that is a duplicate for your character will become tradeable. This removes one of the biggest drawbacks to the personal loot system for raiding guilds — that duplicate loot is completely wasted. If your team currently uses a point system or some other method of loot distribution that takes time to manage, you may want to give personal loot a try in Legion. All those duplicate items could eventually feed players off — and off-off –specs. 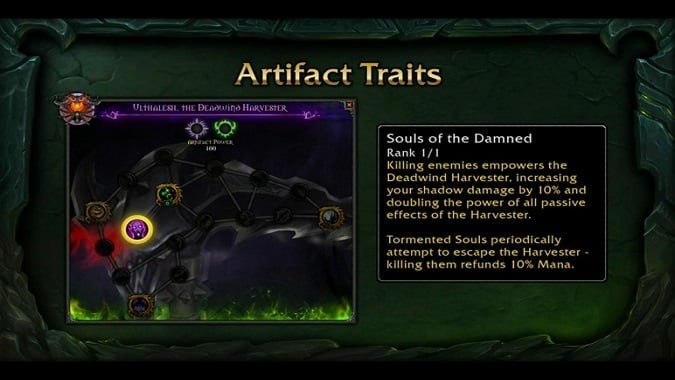 Artifact Power is the new Apexis Crystal. Unlike the crystals, however, Artifact Power seems much more relevant and desirable to all players, since it will unlock traits and even new abilities through their spec’s Artifact. Blizzard has said it will take months to unlock everything for a single spec. Given off-specs and alts, Artifact Power will be a sought-after commodity for most of Legion.

Most importantly for guilds, players can earn Power can from every type of game content: world content, dungeons, raids, battlegrounds, arenas, etc. Players may look to run content that they’ve shunned in the past for the opportunity to earn more Artifact Power, or at least break up the monotony of earning it from the same sources. Guilds who expand their events and activities into new areas may find it easier to recruit by offering a broad spectrum of Artifact Power sources.

Professions are getting a sweeping overhaul in Legion. It sounds like they’ll be much more invovled to level. Also, Blizzard wants to make crafted loot “special,” offering different bonuses and abilities than loot obtainable elsewhere. It’s likely that some of these items will be powerful and highly sought after for PVE or PVP content. One crafted necklace, for example, offers a 15% speed boost when the wearer is Enraged.

Going into the expansion, it will be a good idea to make sure your guild covers all the professions. You may even want to assign one primary profession per character for your players to focus on first so you’ll have each one maxed out as soon as possible.

The new transmog system sounds like a huge leap forward for character customization in WoW. Players who already transmog will want every item they can get, and players who currently don’t transmog may finally give it shot once so many of the current system’s limitations are removed. Guilds who offer transmog runs of older content will attract those players. Niche guilds who are dedicated primarily to building transmog sets could have great success in Legion.