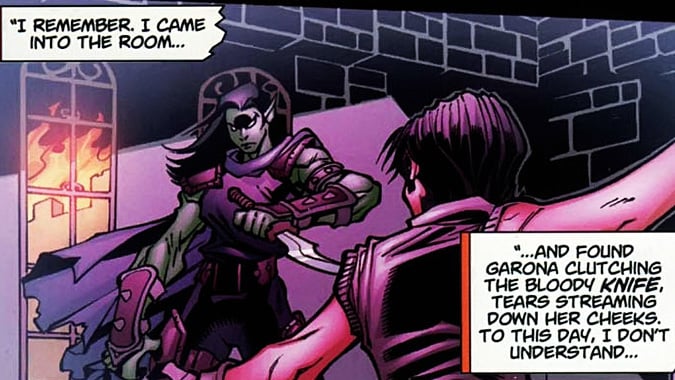 Blizzard threw out previews for all Artifact weapons last week, and as I was in the middle of BlizzCon, I didn’t actually have a chance to give them a good look until yesterday. I’ve been hesitant on whether or not I’m going to continue playing my Rogue into Legion, largely because the Demon Hunter class looks so good — but the Rogue Artifact weapon for Assassination is leaving me with a nasty taste in my mouth and an intense desire to, if not change my class, change my spec.

Why? Well, let’s take a look at that Assassination weapon.

The orc warlock Gul’dan had these daggers made for his personal assassin, Garona. The blades are said to drink blood and inflict traceless poison, leaving little sign of their grim work: the perfect tools for an assassin. She used them to carry out countless atrocities while under Gul’dan’s control, including the murder of Stormwind’s King Llane, whom she had befriended. Afterwards, in anguish, she asked a trusted ally, Meryl Winterstorm, to help her hide the blades away in the hope that they’d never have to be used again.

I…don’t like this. Look, I play a Horde character as a main, so theoretically this shouldn’t matter in the long run if I’m looking at this from a roleplay-ish character perspective. But Garona was basically the mind-slave of Gul’dan at the point that she murdered King Llane. It wasn’t something she wanted to do, not at all. And Llane was a good king — he was willing to trust Garona, willing to hear what she had to say. Those daggers are the daggers that tore out the heart of a good man that didn’t deserve his fate. They’re the daggers that Varian witnessed as a terrified child, plunging into the chest of his father. They’re the physical reminder of that moment when Garona, despite her tears and anguish, was forced against her will to commit the murder of the first man who’d been decent to her, who treated her like a person, not a reject of one race or another.

So…I’m not exactly happy that those daggers are the ones my Rogue is going to pick up and use. Anguish and Sorrow are appropriately named, but the long and storied history that they carry is one that makes me incredibly uncomfortable, to the point where I think, if I do end up sticking with my Rogue, I’ll choose a different spec entirely. And I play Horde. I can’t imagine being an Alliance player and choosing to use those weapons anywhere near Varian Wrynn — hasn’t the guy suffered enough?

But I think about these things a little too much — I mean, I’m probably far more invested in the lore than your average player. So I’m wondering what the rest of you think about your weapon previews. Are you excited about the new lore being presented? Does the lore behind your weapon really matter to you, or are you anxious to find out how exactly you get your hands on the thing?