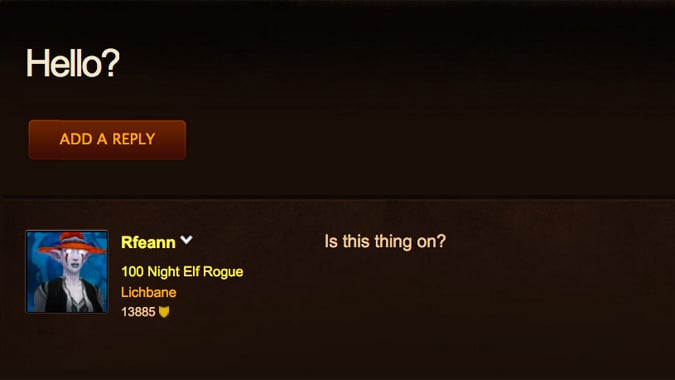 This week’s edition of Encrypted Text isn’t about Rogue class design or gameplay. It’s about the power we have to change it.

Over the past several days, something rare and amazing unfolded in the WoW community. Or, more accurately, three somethings, which occurred in pretty quick succession:

In any given week, one or more of these is usually happening; sometimes it’s even two or three. But it’s extremely unusual for all three to take place in regards to a single topic.

And here’s what makes it especially cool for us: It was a Rogue topic.

The catalyst for this unexpected turn of Rogue design events was a new Legion alpha build on Jan. 27, which made the Subtlety spec available for the first time. The relatively small number of players who have alpha access — most of whom are pretty dedicated bloggers, streamers, theorycrafters, podcasters, YouTubers, raiders, and competitive PVPers — got their first hands-on experience with the spec. And they haaaated it. (That’s a somewhat NSFW link there, by the way — lots of salty language, albeit with a great accent.)

Now, to be sure, plenty of folks had already been very busy disliking the Sub changes for months — ever since the first alpha build back in November revealed a dramatically simplified basic DPS rotation, fewer mobility and crowd control spells, and a completely redesigned Shadow Dance that transformed the iconic on-demand burst cooldown into a passive, frequently occurring, short-term buff.

Players who enjoyed the Subtlety spec for years due to its unique playstyle were quick to decry the changes. After all, Subtlety has long been the most difficult Rogue spec to master, but has also sometimes been slightly more powerful due to its complexity. And when Sub became available for testing late last month, all of those changes were still in place.

At that point, a new flurry of criticism hit the interwebs. Though not all of it was especially helpful or coherent, some was well-written and rationally explained. Very little of it, however, was on the forum that WoW‘s designers specifically used for collecting and analyzing feedback from players who were able to access the Legion alpha. The vast majority was instead floating in an ocean filled with web flotsam, making it harder for the designers to spot the good stuff. That, in turn, led to a public request from one of the designers, Chadd “Celestalon” Nervig:

Spurred by that tweet, Rogue alpha testers took to the alpha feedback forum, peppering it with threads chock full of respectfully heartfelt and detailed explanations explaining why they personally felt that the Sub changes not only looked bad to them on paper, but actually felt bad to play within the game.

After several days of taking that criticism in, Nervig took to the forums to explain the intent behind the Subtlety changes and describe what the design team’s next steps would be:

Originally Posted by Celestalon (Official Post)
The idea of a Rogue that got to do the full Opener-Builder-Finisher-Vanish cycle repeatedly was an extremely compelling fantasy to us. But it also was a scary one, from a balance point of view. Because of that, we were quite timid about it, reducing the stealth to not be actual stealth, taking away more CC to compensate for the potential of many Cheap Shots, initially taking away Shadowstep to compensate for incredible mobility potential of Shadowstrike, and felt tentatively OK with the reduced flexibility of the new Shadow Dance due to its sheer uptime. Additionally, there were some bugs and tuning issues in the currently live alpha build that make Subtlety seem worse than it is, such as Nightblade doing less damage than Eviscerate, which we’ll get fixed.

Feedback has been clear. The core issue is that the Opener-Builder-Finisher-Vanish cycle doesn’t feel distinct or special; Shadowstrike feels remarkably like Backstab and it’s easy to not even feel a difference. The upside isn’t there, and the downsides are many and strong. And, the gameplay is not engaging enough overall.

So, a future alpha build (not sure yet if it’ll be the next one, or the one after that) will have significant changes to Subtlety. It’ll include things like Shadow Dance returning to being an active ability, the addition of a new opener, and the return of some more CC. Stay tuned for full details when the build is ready.

The reaction to Celestalon’s post was as positive as the initial reaction to Subtlety changes was negative. Players expressed appreciation not just for Blizzard’s decision to alter course on many of the most contentious design moves regarding Subtlety Rogues, but for Nervig’s forum post itself. The post offered an open and frank explanation of the design intent, acknowledged of the impact of player feedback, and explained would happen as a result of that feedback.

And that was that. In the span of a week, the core community of Subtlety Rogues went from distraught and disgusted to appreciative and appeased — well, cautiously appeased, at least for the time being. (Rome wasn’t built in a day, as the saying goes, and neither is a fully functional player-designer relationship.)

While plenty of players hailed the course change on Subtlety as some kind of wildly successful insurrection — the power of the masses to force a behemoth to its knees through noise, fervor and relentlessness — I think the reality is that the feedback process worked out pretty much exactly the way WoW‘s class designers intended, and the triumph for players isn’t quite what many may think.

The class designers came up with a new approach to Subtlety that they knew would be controversial, but that they wanted to put through the wringer anyway — as Nervig explained in his forum post, “[W]e sometimes will go forward with testing something that people respond negatively to on paper, to see if that response remains the same once it’s actually been tried.”

So they implemented the Subtlety changes in an alpha stage of testing, when the spec could be played only by a select group of (presumably) highly engaged, highly knowledgeable, rigorous player-testers. Then Nervig provided an avenue for feedback, asked players to impose a little quality control on their thoughts, and got precisely the response he and the other designers needed in order to fully understand not only what folks liked and what they disliked, but why.

Don’t get me wrong: The groundswell of negative reaction from players in various forums, streams, videos and tweets was important. It was a signal, like a flare going up. But casting a flare is only helpful if rescuers can understand where it’s coming from; when it comes to game design, it takes specific, focused, rational feedback to cut through the fog of player anger and vitriol, giving designers a clearer view of what they need to do. 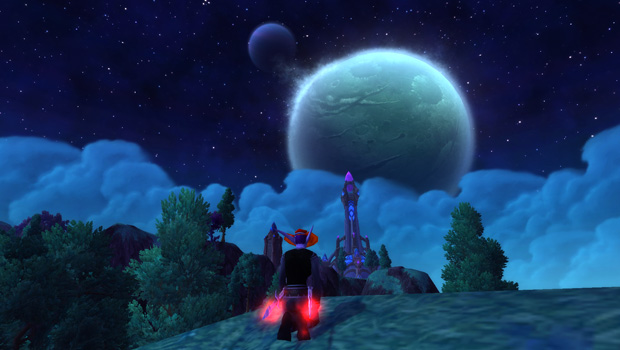 Trust within the shadows

And so, this chapter of the Subtlety Rogue’s evolution had a happy ending: Players had their say, designers got their good feedback, and players got to watch their feedback lead to a design change. But two very important, very human factors lay at the heart of what made this work out so well: trust and communication. Sadly, we don’t hear those two words used much these days when we talk about the relationship between WoW‘s players and its designers. Maybe this episode can serve as a new beginning.

If Nervig hadn’t engaged players on Twitter and made his request for testers to use the official alpha forum, Subtlety feedback may have continued to scatter itself across the web, making it harder for designers to see, collect, and discuss it. If players hadn’t taken Nervig at his word and trusted that good feedback would be read and considered, they wouldn’t have bothered heeding his request in the first place. And if Nervig hadn’t taken the time to explain his fellow designers’ past and future plans — and to take the step of thanking and encouraging players who gave quality feedback — those players may have been justified in losing faith that the time and energy they put into their feedback had value.

While it’s just one isolated example, this experience restored a morsel of trust (at least among Rogue stalwarts) to a player-developer relationship that has felt in recent years as though it’s been growing more cold and distant. It’s something to build on, at least — a small example of how communication and trust can play out more effectively than it has at times.

It’s probably not realistic to expect a designer or a community manager to take time replying in depth to more than a handful of topics, and it’s certainly not realistic for us to expect designers to change course on decisions they’ve already reached that they feel confident about.

But these moments should at least increase our faith as players that good feedback is not being discarded — and can even change the game we love. Meanwhile, such indicents should also increase WoW designers’ and management’s faith that good communication can yield better feedback — and can help them improve the game they love.

Now, about that Rogue class hall. …