Other than the Overwatch agents that were directly involved with taking down the omnic uprising and saving the world, no one knows what really started the Omnic Crisis. However, reports were pretty specific with their references, pointing out that Overwatch took out the “force behind the uprising,” rather than simply wiping the omnics out. Given the fact that omnics today seem to be less inclined to fight and more inclined to simply get along with humanity, there’s a blatant indication that someone, or something, took over the omniums and manufactured the rebellion.

In other words, it doesn’t appear that the omnics themselves went rogue so much as they were coerced or even hacked into performing outside their intended operations. The omniums were churning out legions of these militarized robots, but once whatever it was that caused the Crisis was taken care of, they stopped. Most of the Bastion combat units were destroyed, but not all…and the one notable Bastion that’s been left behind seems to be way more interested in observing the world than taking it over.

Overwatch may have been formed as a world-wide team to combat the threat, but there were parts of the world that were determined to handle the Crisis on their own… and they succeeded. 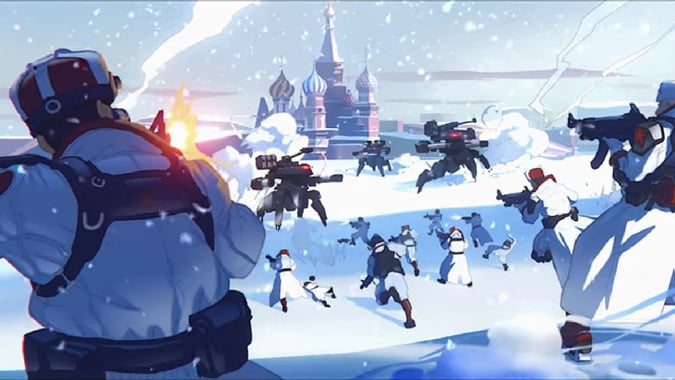 Russia and the Omnic Crisis

Russia was among those nations that tried using their own technology and innovations to combat the omnic threat. Although most countries were forced to admit that they simply didn’t have enough strength to defeat the omnics on their own, Russia was the exception. Volskaya Industries began production of Svyatogor — giant, human-piloted mechanized walkers — in an effort to fight fire with fire. It made perfect sense — evil robots threatening to take down the country? Produce bigger, deadlier robots, with humans at the helm.

And it worked. Flawlessly. While the rest of the world was busy forming Overwatch, the Russian Defense Forces were able to defeat the omnics themselves, fighting their way through the omnic armies and shutting down the region’s omnium. Whatever this “force behind the uprising” was, it clearly wasn’t located in Russia, because once the omnium was shut down, Russia was safe.

The years passed, and Russia remained less involved with international affairs — after all, they’d proven they had absolutely no need for Overwatch. Standing proud, tall, and entirely on its own, Russia saw the next thirty years free of any kind of threats.

And then one day, suddenly, Russia’s omnium reactivated. 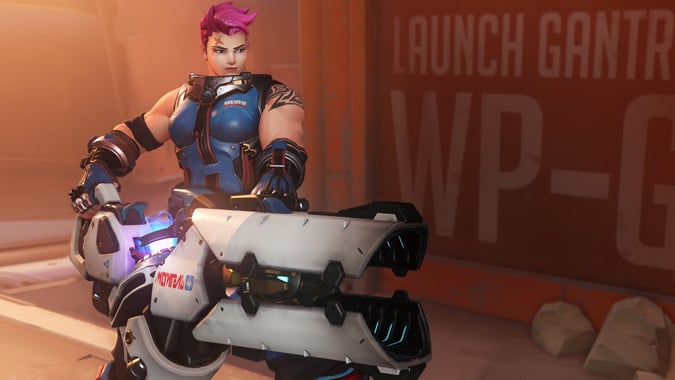 Zarya in a land of post-war devestation

Aleksandra Zaryanova was born in a remote Siberian village during the Omnic Crisis, one that was pretty much smack dab in the middle of all the fighting. While Russia was in fact victorious without Overwatch’s help, the war wasn’t without its costs. Zarya grew up in a land of post-war devastation, spending her childhood among the rubble and wreckage. As she grew older, she swore that one day she would gain the strength to help her people recover.

And she meant it. Training in bodybuilding and weightlifting, Zarya soon caught the attention of the entire world, moving up the athletic ranks and representing Russia with pride. It was pretty much expected that she’d absolutely shatter longstanding world records in the world championships — and it was also blatantly clear that she’d achieved the strength she was looking for.

But on the eve of the championships, word came from her village that the omnium had been reactivated. The village was once again under fire, thrust into a war it wasn’t prepared for. Zarya dropped everything, withdrew from the competition and returned home…because gaining strength was all well and good, but it was defending her home that mattered the most.

The reactivation of the omnium and its attacks didn’t go unnoticed. Volskaya Industries immediately stepped up production of the Svyatogor, well aware that the mechs were key to bringing the Crisis to a halt the first time around. So far, the second Omnic Crisis had claimed over 15,000 lives, but the international community was reluctant to intervene — partially because Russia seemed capable enough to handle itself the first time around, of course. But it’s also likely because the world was watching, waiting, and thinking — if one omnium suddenly began malfunctioning again, it was quite possibly only a matter of time before they all began doing the same thing, worldwide.

And this time, there was no Overwatch to stop them.

That’s the reason Winston was considering bringing Overwatch back together in Recall: he was well aware of what that second Omnic Crisis might mean. He was a member of the team that was founded specifically to combat the Omnic Crisis in the first place. Without the Omnic Crisis, there never would have been an Overwatch at all. If, in fact, the omnium uprising in Russia was just the first step towards another global crisis, Overwatch’s return would be essential — there’s no way the world would survive without it.

This makes Talon and Reaper‘s efforts all the more disconcerting. We’ve seen terrorist group targeting former Overwatch agents and trying to tear the organization apart before it even has the chance to reform. Are Talon and Reaper in cahoots with the omnics? Are they the reason the Russian omnium was reactivated — as a way to flush out former Overwatch agents from hiding and make them easier to pick off one by one? Or is it possible that the force behind the original uprising — whatever that was — wasn’t actually defeated at all?

The latest Overwatch short, Alive, might have some answers hidden in the fighting. Widowmaker is still working with Talon… and in Alive, she manages to assassinate one of the few respected, positive voices for the omnic community. It’s clear that Talon holds no love for omnics, and wants the world’s suspicion firmly on both omnics and omniums alike — but is it some kind of revenge tactic on an organization long gone, or a distraction for whatever Talon is really planning? We aren’t done with the animated shorts just yet, so we’ll have to wait and see what comes next.