Every game as big as World of Warcraft is going to leave things unfinished or truncated from time to time. This is just the nature of the beast. Sometimes these things are unavoidable, and sometimes they come back and are resolved years later in ways we might not have expected — if you play a Death Knight, for example, you’ve seen the resolution of the Galen Trollbane storyline in a way you might not have expected. These dangling plot threads are sometimes picked up, and Legion seems to be taking the opportunity presented by the Class Order Hall campaigns and the Artifacts to do exactly that in many cases.

Not all of these dangling plots have been picked up. Let’s talk about a few.

Back in 2015, well before Legion was even announced, I did a KYL about The Third Host, which was based on the lore behind the original Alterac storyline from Vanilla WoW. In many ways we’re now seeing the Third Host on Azeroth right now. The current Legion invasion of the world is essentially a “third host” if we count the War of the Ancients as the first host and the Third War as the second. And if you’re aware of spoilers for Nighthold and what Gul’dan is trying to do there, you’ll understand why it could also mean the Third Host in a completely different way.

So in that regard this one is far from a missed opportunity. And it’s not really a surprise that the Legion returned, we always knew they would someday. But what I miss from that old lore is the personalities and groups and the sinister interplay of cultists seeking to infiltrate and subvert Azeroth from within. The current Legion invasion is primarily a brute force endeavor. There’s not a lot of subtlety to it. Even when the Legion has infiltrated somewhere, it doesn’t feel as widespread and subversive as the old Argus Wake, Burning Blade, Shadow Council days. To a great degree, the Gul’dan from Warlords of Draenor is more of a blunt instrument than the original, and as a result I feel like we’ve lost a little of what made the Legion so terrifying. Not just their huge waves of demons, but that they could convince people to betray their own self interest and side with their destroyers, turn their backs on their world.

But still, credit where credit’s due — the original Third Host letter dates back to the game’s launch in 2004, and the Legion invasion happened in 2016, some 12 years later. That’s a slow play, Blizzard.

Way back in 2005, I got my hands on a Quel’Serrar. At the time I was tanking in raids and getting a Quel was the symbol that you’d arrived. Only Thunderfury had more prestige as a tanking weapon than Quel did. The thing is, there was a legend to the Quel’Serrar, a history that was rooted in there being more than one such blade. Lorekeeper Lydros said of the sword:

Rumors exist of a single, legendary blade of Quel’Serrar crafted for an unknown entity by the combined might of the five Aspects. Before the abominations of Nefarian and Deathwing were thrust into our world, such meetings of the Aspect were represented by the term ‘Prismatic.’ I could only assume that the Prismatic Blade of Quel’Serrar was a most glorious creation.

Now, we know that Quel’Delar exists, the “sister blade” to Quel’Serrar. There’s also the unconfirmed Quel’Zaram, from the Warcraft RPG. But we’re thirteen years down the road from the introduction of Quel’Serrar, and we’ve never heard or seen anything further about the Prismatic Quel’Serrar. Was Quel’Delar considered another Quel’Serrar and the name merely the Thalassian version of Quel’Serrar, or did the different names mean something specific? Lydros says that the blood of the dragon used to quench a Heated Ancient Blade imbues aspects of that dragon to the blade. If Quel’Delar was quenched in the blood of a different kind of dragon, that might explain its differences from Quel’Serrar, or perhaps the use of Saronite in its reconstruction. But that leaves us with many questions. Are there other kinds of Quel’Serrar blades in the world? If so, where are they now? Does a Prismatic Blade, one forged with the blood of all five dragonflights, exist and if so where is it?

For that matter, from the old days of Dire Maul until now, we’ve never really found out why the dragonflights aided the ancient Night Elves in making the High Blades. Both Quel’Serrar and Quel’Delar were crafted by the dragons and the elves together, but why? Was it before or after the War of the Ancients? What were the blades designed to do, exactly, that the dragons felt it necessary to make them even though they’d have to use their own blood to quench and temper the blades? It doesn’t say that you actually have to kill the dragon in question, but if you told me I had to use my own blood to make a weapon for some other guy to use I’d want there to be a very good reason why I had to bleed for it. What is that reason?

We haven’t heard any more about the Quel blades since Quel’Delar. Did Lothar use a blade named Quel’Zaram, and if so, what happened to it? What was it? Was it another High Blade, and if so, who had it before he did? Did the dragons entrust swords to other people besides the elves? I feel like with the Burning Legion on Azeroth it might be time to find these swords again. 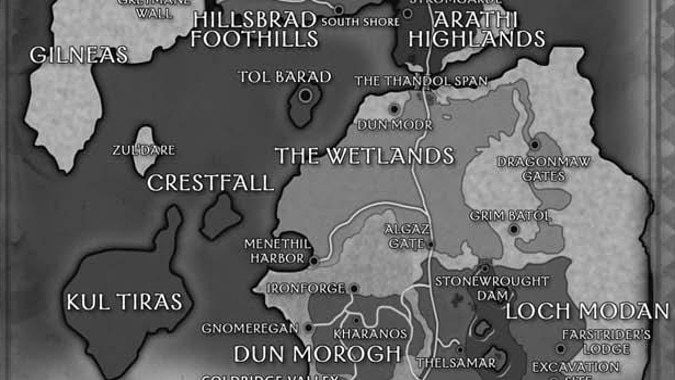 Seriously, how has it been thirteen years since World of Warcraft launched and we haven’t seen a single clue about what happened to Kul Tiras? This island nation is the birthplace of Jaina Proudmoore, and former Alliance Grand Admiral Daelin Proudmoore was its ruler up until his death during the Founding of Orgrimmar incident. But we’ve never seen it in World of Warcraft and even when the Cataclysm expansion brought in Gilneas and Tol Barad, Kul Tiras was gone. If you look at the modern map of Azeroth, the area where Kul Tiras inhabits on that map above seems partially occupied by the submerged lands of Vashj’ir.

Kul Tiras was a mercantile island city-state, it served as a trade hub between the various Human kingdoms that would eventually become the Alliance of Lordaeron and possessed the most powerful navy of these seven kingdoms. The fact that we haven’t heard anything out of Kul Tiras since Warcraft III and even then we never actually saw the island itself or the majority of its people is something that needs to be addressed. Kul Tiras is the only one of the original Alliance nations unaccounted for as of 2017, and it seems beyond strange to me that we haven’t heard a peep out of them in all this time. Did the Cataclysm sink the island? Push it out into the ocean? Drag it into a pocket dimension? Is Kul Tiras currently in a dome at the bottom of the sea? Blizzard, it’s time to give us something in game that tells us anything about the final fate of Kul Tiras.

These are just a few of the dangling plot threads we’ve seen over the years in World of Warcraft. There are lots more. How did the Gilneans end up with magic similar to Druidism before the Worgen Curse and do any other Humans have similar beliefs? What happened to the Mantid after the Siege of Orgrimmar killed off their Paragons? Are there any Dark Trolls left somewhere on Azeroth or are they indeed all gone? Did everyone seriously just shrug and let Grommash off the hook for the whole Iron Horde thing after Draenor? The comments await you and your own ideas for threads they should pick up, or that they did pick up.

Blizzard Watch is made possible by people like you.
Please consider supporting our Patreon!
Filed Under: Daelin Proudmoore, Gul’dan, Kul Tiras, Prismatic Quel’Serrar, Quel’Delar, Quel’Serrar, Quel’Zaram, Sargeras, The Alliance Of Lordaeron, The Burning Legion, The High Blade, The Third Host, The Third War, The War Of The Ancients
Advertisement