When we initially heard the story behind the Overwatch organization, it was pretty straightforward. A group is formed to counter a crisis, the group is successful, and the group’s popularity wanes over time until it’s finally disbanded. But the story is hardly as cut and dry as it originally seemed, and we’ve seen more bits and pieces of that tale slowly introduced over the past year. With Overwatch’s latest event, players have been plunked down right in the middle of what appears to be a pivotal moment in the group’s history.

Here’s what we know for certain so far: At some point in the future, a company called the Omnica Corporation emerged as a pioneer in robotics manufacturing. They specialized in automation and self-improving software, and constructed a series of massive factories called omniums. Omnica promised that their technology would usher in an economic golden age, and proceeded to install these facilities all over the world.

Unfortunately, the omniums began to malfunction over time, and it was determined that their output wouldn’t be able to meet the companies lofty goals. After a series of investigations, evidence of corporate fraud was found – and that led to both the abrupt and forced end of the company, and a shutdown of all the omniums right along with it.

Except after a period of time, all of the omniums began to wake themselves right back up again. This time, production focused on militarized robots that were immediately used to launch a military campaign against all of humanity. Because the omniums were spread worldwide, it meant the entire world was in peril – and that was the beginning of the Omnic Crisis.

Nations all across the world tried to deal with the omnic threats using their own methods and technology. But despite their efforts, the majority of these countries were unable to shut down their associated omniums. Russia was a notable exception to this –they managed to defeat the omnics by using their own technology. But for everyone else? The situation was impossibly grim.

Facing disaster of global proportions, the United Nations came together and created a unique task force comprised of the best and the brightest soldiers and strategic minds each country had to offer. They called the group Overwatch – an international task force deliberately designed to handle the omnic threat. And Overwatch succeeded, earning the adoration of the world in the process.

In the years following the Omnic Crisis, Overwatch flourished. It was redesigned into an international peacekeeping force, inspiring an era of scientific innovation and exploration. Overwatch continued to bring in new members over the years – but as time marched onward, popular opinion of Overwatch began to wane. Rumors flew back and forth regarding possible internal corruption. As it turns out, they may not have been that far off the mark.

Twenty years after the end of the Omnic Crisis, tensions remained between omnics and humanity. Despite continued efforts to foster peace, there was still a great deal of wary suspicion on both sides. In London, attempts were made at achieving some kind of peace – but the fact of the matter was that omnics were treated poorly. Omnics built their cities and did the kind of work that humans just didn’t want to do – and were rewarded with no rights and no citizenship.

In response to this, an omnic extremist group called Null Sector emerged, fighting from the underground and willing to do whatever it took to achieve some semblance of omnic equality. The organization had the silent support of much of the mistreated omnic population. Eventually, the group launched a surprise attack on King’s Row, sending the city into chaos. Over the course of a month, Null Sector managed to foment the situation to the brink of full-out war.

But Overwatch wasn’t allowed to step in. By this point in the organization’s history, word about Blackwatch had somehow gotten out, and the covert ops team had been suspended. This didn’t stop Jesse McCree from mysteriously showing up in London – nor did Gabriel Reyes, Blackwatch’s leader, seem to be particularly concerned about it. And Strike Commander Jack Morrison was left with a crucial choice to make – disobey direct orders, or watch the world plunge into the kind of war it hadn’t seen since the days of the Omnic Crisis.

Of course Morrison chose to intervene. How could he stand by and let things get progressively worse? 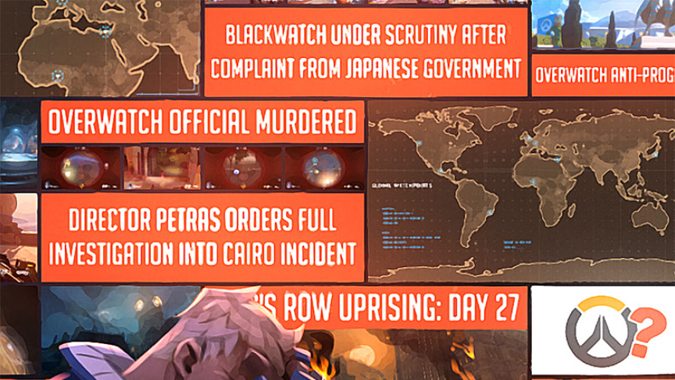 But it feels like this was quite possibly the beginning of the end for Overwatch. Lena Oxton’s first mission as Tracer — the first mission she undertook after her chronal disassociation had been cured — was the strike against Null Sector in King’s Row. And maybe that explains a lot about her character, and how passionate she is about Overwatch and what the group is capable of – that first fight was as much a personal one as it was about saving the world. After all, London was home.

There are several hints in the Uprising comic that clear up Overwatch’s timeline. Ana Amari has both eyes and is obviously an active member of the organization, so this took place before the events in Legacy. According to news reports in Morrison’s office, an Overwatch official was murdered – that would be Gérard Lacroix. Even more interesting, however, is the headline that Blackwatch was under scrutiny after a complaint from the Japanese government.

Genji appears to be a fairly recent member of the group, undergoing training side-by-side with Tracer. This means that Uprising took place after Hanzo and Genji’s fateful battle – the one that led Hanzo to desert the Shimada Clan. One has to wonder, then, why there would be a complaint from the Japanese government, if Genji was used to shut down the Shimada clan, a notorious criminal organization. Does this point to possible corruption within the Japanese government? Did the Shimada clan have that kind of influence?

Approximately one year after the King’s Row Uprising, Reyes and Morrison came to blows at Overwatch’s Swiss headquarters. The fighting triggered an explosion that destroyed the headquarters, and supposedly killed both Morrison and Reyes. One year after that, Overwatch was officially disbanded. Five years later, Winston issued the recall – adding up to a span of seven years between Uprising and the present day situation in Overwatch.

Curiously, Reyes doesn’t seem to be overly upset during the King’s Row Uprising, despite the fact that Blackwatch has been suspended. He is, however, clearly putting his agents to work against orders – and doing his best to be deliberately vague about what they’re doing. Here’s the thing: Reyes and Blackwatch may have been covertly working in spite of their suspension – but so was Morrison, once he gave that order to intervene in King’s Row.

And maybe that was part of what started the arguments. After all, Overwatch was clearly carrying out operations after King’s Row – which means Morrison wasn’t punished for his actions. Blackwatch, on the other hand, had been suspended entirely – based on a complaint that may or may not have had any real validity. No wonder Reyes was upset. Morrison was getting away with far more, seemingly scot-free, while Reyes was forced to toe the line and behave.

Although the Overwatch graphic novel was ultimately cancelled, Uprising is far more compelling. We get a glimpse of Overwatch’s glory days, delivered in a way that players can interact with. Overwatch has done a good job so far with presenting story as a separate element, but the way Uprising is being woven into the game is pretty ingenious. After all, if the game world is essentially our playground to use these heroes like action figures, it stands to reason that the stage set in that game world can be anywhere – or at any period in history. Why not let the game show us that story as it happened? We’ll have to wait and see if this is a one-time event, or if future special events will continue to delve into Overwatch’s compelling past.