How to create a character in Dungeons and Dragons

What makes up a character?

Mechanically, Dungeons and Dragons characters are comprised of six attributes.

Every class and race combination has a bonus to one of these attributes. My Dwarf Cleric, Mediel — whom you’ve heard me play with the Blizzard Watch D&D group — gets a bonus of +2 to Constitution because Dwarves are tough. In another example, Tieflings raise their Intelligence by 1 and their Charisma by 2.

Skills have modifiers — pluses and minuses to dice rolls — which are tied to these attributes. If, for instance, you find yourself in the ruins of some city and you have a +3 to History, it could come in handy if you’re trying to remember what the place is and why it might be a good idea to move along quickly.

The most important reason to know your ability scores is for saving throws. If you’ve listened to us get away from the dragon and fight the kobolds, you’ve heard Matthew Rossi say, “Roll a Wisdom (or other attribute) saving throw.” Based on the number you generated when you rolled your character, you may have changes to your die roll based off the score in the attributes above.

How to pick a character

I’m going to highlight a couple ways to do this. The first way is to go through a Player’s Handbook and read about the various races and classes available. If you have never played this game, stick to the Handbook — seriously. There are 108 possible combinations of basic races and classes. If you can’t find a combo you’d like to play, you’re probably overthinking this. Additional prestige classes are available when you reach a higher level and there are a number of supplemental books which talk about unique races. If you’re new, I’d steer clear of those until you understand gameplay. Find something you like within the Handbook and plug your scores into that race and class.

The other way is to just roll the dice and, once you have a list of numbers, see what you can make with those numbers. It’s how I rolled my very first character all those years ago. I wound up with a human druid. I adore that character and would play her again in a heartbeat. It would take bit of work to bring her first edition self into fifth edition, though.

There are also premade characters in the Player’s Handbook if it seems way too daunting to create one from scratch yourself. 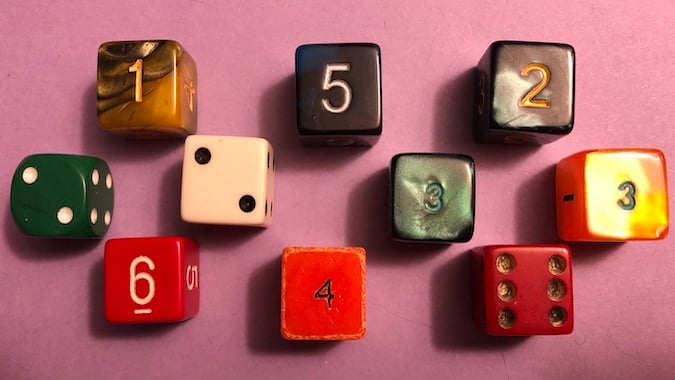 Time to get rolling

Actual character creation involves dice rolling. As you do this, you will come to understand the sweet joy of a good roll and the abject despair of a bad roll. You’ll need three six-sided dice. Your dungeon master will have input into how many times they will want you to roll for the attributes.

Let’s say you’re going to play an Elf Fighter. Roll your dice once for each attribute and add the face totals. Do this seven times. You now have a list of seven numbers. Do this again twice more so you have three columns of seven numbers. For an Elf Fighter, you want the highest number to be Strength with the second highest to be Constitution. Elves get a +2 to their Dexterity. Look at your columns. Toss out the lowest number in each column. Which column has the best numbers? Those are the ability scores for your Elven Fighter.

This method can also be used if you’re going to generate scores and then find a race and class which match the numbers generated. Do not be afraid of low numbers. In another D&D game I play, my Dwarf Cleric has an Intelligence of 8. She bought a book which appears to teach the reader how to make healing potions. With that Intelligence, the chance she’s going to get a potion correct is below average. She doesn’t understand some of the words in the book, to begin with.

Things like this add flavor to your campaign and to this character you’re creating.

Once you have the numbers plugged into your attributes, your saving throws and skill modifiers are generated. You’ll need to roll hit points. These function the same as in World of Warcraft. The fewer you have the easier it is for kobolds to kill you.

If you’re a spell caster, you need to find the tables which tell you how many spells you get per day and what they are. You need to get armor and figure out what the number is that an opponent has to roll to actually hit you. You need a weapon and how much damage will the weapon do if it hits.

Does your character have a backstory? Why is it in this location, where it meets up with these other adventurers? What is your character’s alignment? Alignment governs how the character views the events of the world. Would they kill a hostage or bring it along? Alignments run from good to evil and chaotic to lawful. Finally, what’s your character’s name? Honestly, naming a character can be the hardest part.

I’ve only really scratched the surface of character creation. You can be as elaborate or as plain as you’d like. If you get stuck, your Dungeon Master will guide you in developing your character. Good luck and happy adventuring.