Overwatch: The Official Cookbook is packed with tasty recipes (and tastier lore tidbits) from around the world 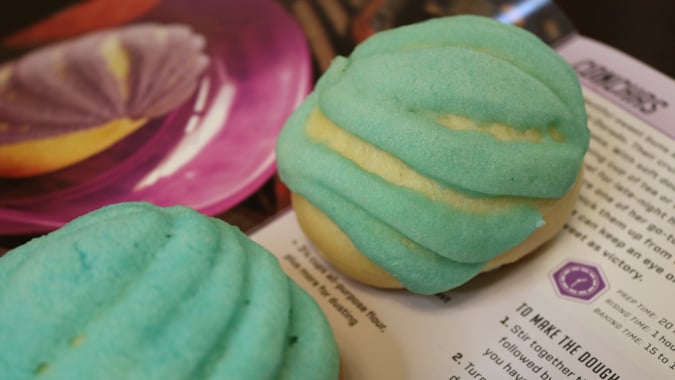 For Chelsea Monroe-Cassel’s other gaming cookbooks, the way forward was pretty obvious. There are dozens if not hundreds of edible food and drink items in World of Warcraft, before you get into the beautifully rendered items that are set dressing for taverns and tables out in the world, many of which look and sound delicious. In Overwatch, there are Murloc-themed ramen joints, a few sad packets of instant noodles, challenging pastries in Paris, and the stands in Blizzard World, which already have ties to their other franchises. How do you make that into a full cookbook accessible enough for a home chef to execute?

The solution is based in Overwatch‘s international cast of heroes. Each hero is highlighted with several selections from their home country or region, including a drink — alcoholic in many cases, but not always. Many of these offerings are quite serious, like the French vichyssoise dedicated to Widowmaker, but they can also be whimsical, like the inclusion of nostalgic Aussie favorite Fairy Bread under Roadhog’s name. My personal favorites were Soldier: 76’s Tater Tot Hot Dish recipe — for that picture-perfect Midwest farmboy appeal — and the DIY bird suets for Ganymede.

Because it is a cookbook highlighting international recipes, some ingredients are going to be much tougher to come by than others depending on where you live. Despite efforts to lightly alter traditional recipes to include ingredients that may be more accessible, some were still a bit beyond the reach of my local grocery store. On my weekly Twitch stream I attempted my hand at several recipes, and left out a few that seemed fun to make for that reason. I initially decided on making the specific D-Va approved kimbap recipe listed without double checking that my store carries the Korean staple kim chi or, oddly enough, even the seaweed sheets for rolling them — especially weird since they sell pre-assembled sushi rolls. I would assume people living in Seoul would likely have a similar issue obtaining prepackaged frozen tater tots. One recipe, Hammond’s Hamster Food cereal bars pictured below, even called for Lucio-O’s cereal which will eventually be tough to find everywhere. 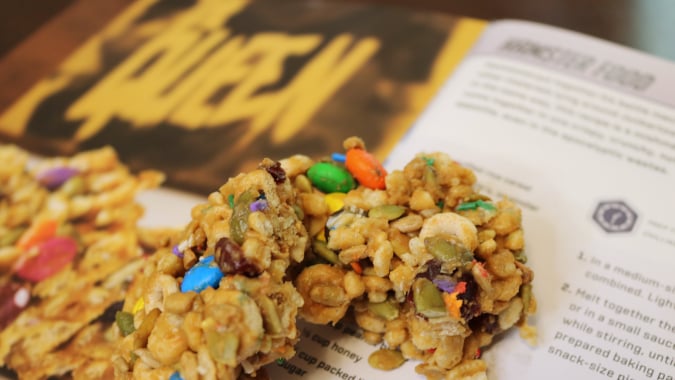 If you do manage to round up all your ingredients — or figure out some substitutions — the instructions are relatively straightforward and easy to follow, even for novice home chefs. There are a few kitchen tricks omitted that may make life easier partway through — for instance, when I was making Sombra’s conchas on our Twitch stream, putting the sugar paste into the freezer briefly to firm it up in my super warm kitchen made it easier to work with — but the cookbook isn’t trying to be an exhaustive guide to every cuisine on the planet, either.

For Overwatch fans, though the recipes will be fun to try out, the real draw may be in the small snippets of lore that accompany each recipe. There are several lore points which have been hinted at in context which are now solidified in black and white in this text. Pharah’s dad is Canadian and named Sam, which was hinted at in a BlizzCon panel and the Reflections comic, is now confirmed in her recipe for Canadian Butter Tarts. This is also the first time in-universe that it’s been explicitly stated that Jack Morrison is gay and has an ex-boyfriend named Vincent, which was hinted at in the Bastet short story and stated on lead writer Michael Chu’s Twitter account. There are a few blurbs which are interesting but far less consequential, like the fact that Brigitte’s mom and Torbjorn’s wife Ingrid is a chemical engineer — let the Hero 32 speculation begin!

Watch Cooking with the Overwatch Official Cookbook! from BlizzardWatch on www.twitch.tv
Insight Editions furnished us with a copy of this cookbook so we could write a review, and we livestreamed several recipes in real time to our Twitch page. If you’d like to catch the VOD of the stream where we made Sombra’s conchas, Doomfist’s shuku shuku, Hammond’s Hamster Food, and Widowmaker’s Widow’s Kiss cocktail, you can find it on our Twitch page. Overwatch: The Official Cookbook is available now on Amazon and the Blizzard Gear Store.

Blizzard Watch is made possible by people like you.
Please consider supporting our Patreon!
Filed Under: Cookbook, Cooking, Overwatch Cookbook
Advertisement