How to understand a D&D character sheet

Playing Dungeons and Dragons, if you’re not running the game and thus playing the role of Dungeon Master, you’re likely playing a character. That character is your avatar in the game world, in much the same way as the character you play in a video game represents you and your choices without actually being you. However, since D&D has its roots in tabletop play (even if you’re playing it in Discord with a dice bot because your players all live in a different part of the world oh hey how did this link to our D&D stream get here) you’ll need a place to keep track of the things your character can actually do — the spells and abilities and skills and equipment and stats that makes Grogthar the Bloodbather different and distinct from Floriathar, Chosen of the Dawn.

That’s what a character sheet is. D&D is hardly unique in having them, and they all tend towards a certain kind of organization — the most common, most frequently needed information is listed up front, with additional pages available if you really need to write your entire character’s backstory and every single item in their inventory down somewhere. We’re going to go over the basics of a character sheet and talk about what they provide and where.

The standard 5e Character Sheet is organized with some crucial but basic information at the top of the page. Your character’s name, race, class, level and who is playing that character can all be found here, along with alignment (your character’s ethical and moral outlook) and experience points. Experience points or XP tell you how close you are to your next level — if you’ve any experience with almost any CRPG you should be familiar with the concept. 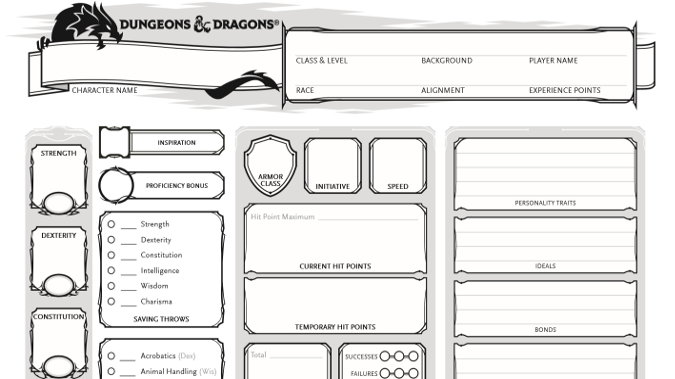 Down the left side of the page are the six primary stats that define your character, also called attribute or ability scores: Strength, Dexterity, Constitution, Intelligence, Wisdom and Charisma. The stat block is set up to provide both your score and the bonus said score grants you — for example, if you have a 17 Strength score, that number will appear in the box, while the circle to the bottom of that box will be where you place the +3 bonus a 17 Strength grants. To the right of the Stat Block are other important attributes — the Inspiration bonus that can be granted by the DM or by a player Bard, the Proficiency Bonus that you gain as you level up, the six saving throws based on your Statistics from Strength to Charisma. Each class will have two saving throws that they have proficiency in, allowing them to add their Proficiency Bonus to those saves. For example, Fighters have Strength and Consitution as the saves they add their Proficiency Bonus to.

Beneath Saves you’ll find your Skills, from Acrobatics to Survival. Each skill is associated with a Stat, so Acrobatics is linked to your Dexterity. If you’re not Proficient in a skill, you’ll simply add whatever your skill bonus is good or bad, so your 8 Intelligence Fighter may not be the best person to roll to make a History check with that -1 to the roll. Skills you are Proficient in will gain your Proficiency Bonus, meaning they’ll improve as you level up. Finally, your passive perception (what you can notice without making a roll to see if you notice it) and any other proficiencies you may have (like languages you speak, musical instruments you play, and so on) are listed at the bottom of this column. 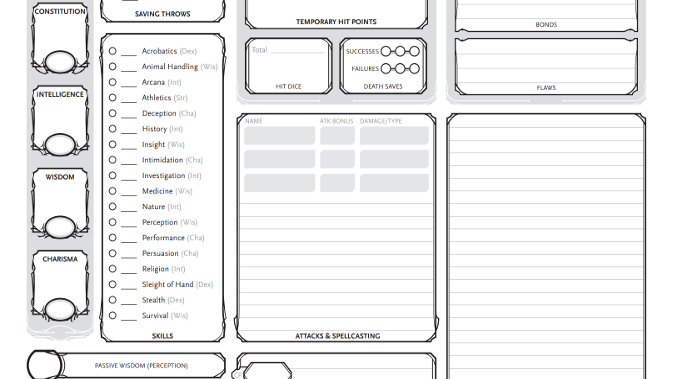 The center of the sheet is devoted to combat, with your character’s Armor Class (how hard it is to hit them — think of AC as a target, so that a 17 AC means that someone needs a 17 or higher on a D20, after bonuses, to make that attack hurt you), Initiative (how likely you are to go first in combat — the higher your Initiative score, the more of a bonus you get when rolling to see when you get to attack during combat) and Speed, or how far you can move in a single round. Below that, the section detailing Hit Points (AC determines if you get hit, HP determines how many hits you can take), Death Saves (when you get hit more than you can take, Death Saves determine if you’re mostly dead or all dead) and finally your most common attacks and spells. These are, after all, how you do the same thing to your enemies. Equipment is below this, so you can choose between that Greatsword and the Maul you picked up last week.

Finally the far right of the character sheet is sort of the grab-bag section — it’s where your character’s personality, ideals, and any class features and racial traits that are important end up. Your Mountain Dwarf’s resistance to poison attacks and Stonecunning ability would go there, for example. It’s important to note that this is a basic character sheet — if you’re playing a Wizard, you’re going to want at least one more page just for your spellbook.

Okay, so that tells you the basics of how to use a character sheet. But how do you get one? Well, you can buy one. Wizards of the Coast sells a set of these character sheets, but they also give them away, if you’re willing to download and print them yourself. And if you want to go full digital, D&D Beyond will not only provide you with the services needed to have an online character sheet, they’ll help you do the work of getting it to make sense. They’re not the only character builder in town, either — both Orcpub and Roll20 have character creation/sheet options, and Roll20 isn’t just limited to D&D, either.

So don’t be intimidated by the character sheet — it’s just here to help you play your character.