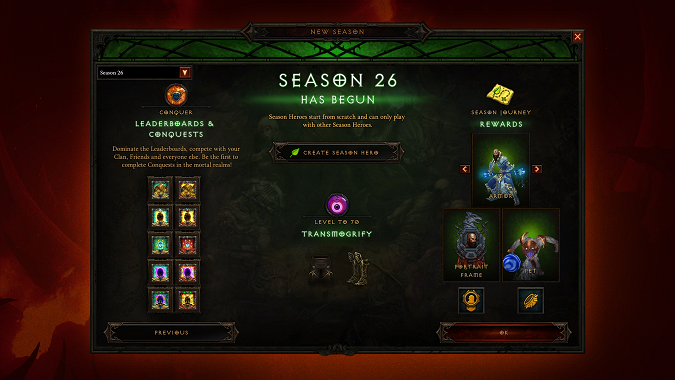 In the Diablo 3 universe, there is a lollipop-wielding nightmare pet just waiting for you to win it and love it and make it your own. “But wait! How shall I acquire this demonic little friend?” you argue. Fret not, for I am here to assist you (and sound like a superhero cliche).

Getting your own Toothsome Trooper will take you through the Seasonal Journey, and Season 26 starts on April 15. So, let’s wind through the steps together, shall we?

The Seasonal Journey refers to the set tasks/achievements you must complete to win the various exclusive rewards for playing in that season. These tasks split into two groups: Chapters (with milestones achievable by all players) and the “enlisted” Tiers (also referred to as the extended Journey) — Slayer, Champion, Destroyer, Conqueror, and Guardian — with goals designed for advanced players. In Season 4/patch 2.3.0, Blizzard added the Season Journey interface for players to track their progress across tasks.

The various tasks in each Chapter/Tier are increasingly challenging, with Guardian’s tasks requiring the most time and effort on the player’s part. However, the Book of Cain is one of two cosmetics available for completing all of Season 26’s tasks, so get ready to knock out both the Chapters and the Tiers — or everything listed below — to get it. 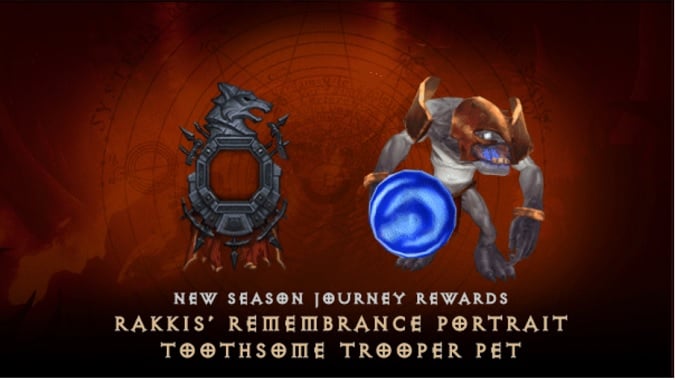 A helpful note for progressing your Season’s journey: let’s say you get to 70 and go from running Normal-difficulty Nephalem Rifts to Torment 1 Nephalem Rifts. You will not only knock out the tasks for Normal and Torment 1, but doing so also completes the tasks for the difficulties in between (Expert and Master). Some players complete the first four chapters as fast as the first night of the season, but playing a few hours a night will spread this work out over a week.

Upon completion, each Tier rewards an improved version of the portrait received from Chapter 4. The completion time for the Tier groups is wholly dependent on completing the more complicated tasks, such as Set Dungeons and Conquests. Players burning through the first weekend can knock out everything, leaving the remainder of the season to run Greater Rifts, grinding Paragon levels, and improve their gear. Going back to the earlier estimate of running a few hours a night, a casual player could complete all this in about a month, but some of it is luck and hard to estimate.

Conqueror (the penultimate Tier) rewards the upgraded portrait and an additional stash tab (up to a maximum of five). New cosmetic rewards — the Rakkis’ Remembrance portrait frame and your Toothsome Trooper pet — only come once the player has finished all Tiers through Guardian.