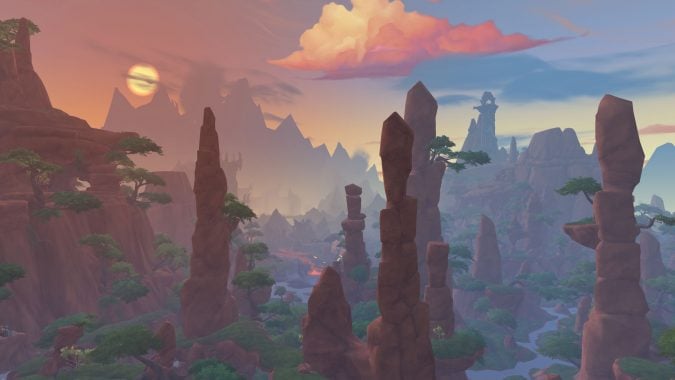 In World of Warcraft‘s next expansion, Dragonflight, we’ll traverse the previously-hidden Dragon Isles and five new zones. As players, we’ll progress through the first four zones during the expansion story (like Shadowlands), while the fifth is the dedicated starting area of the expansion’s new race. So let’s peruse this beautiful addition to Azeroth zone by zone. 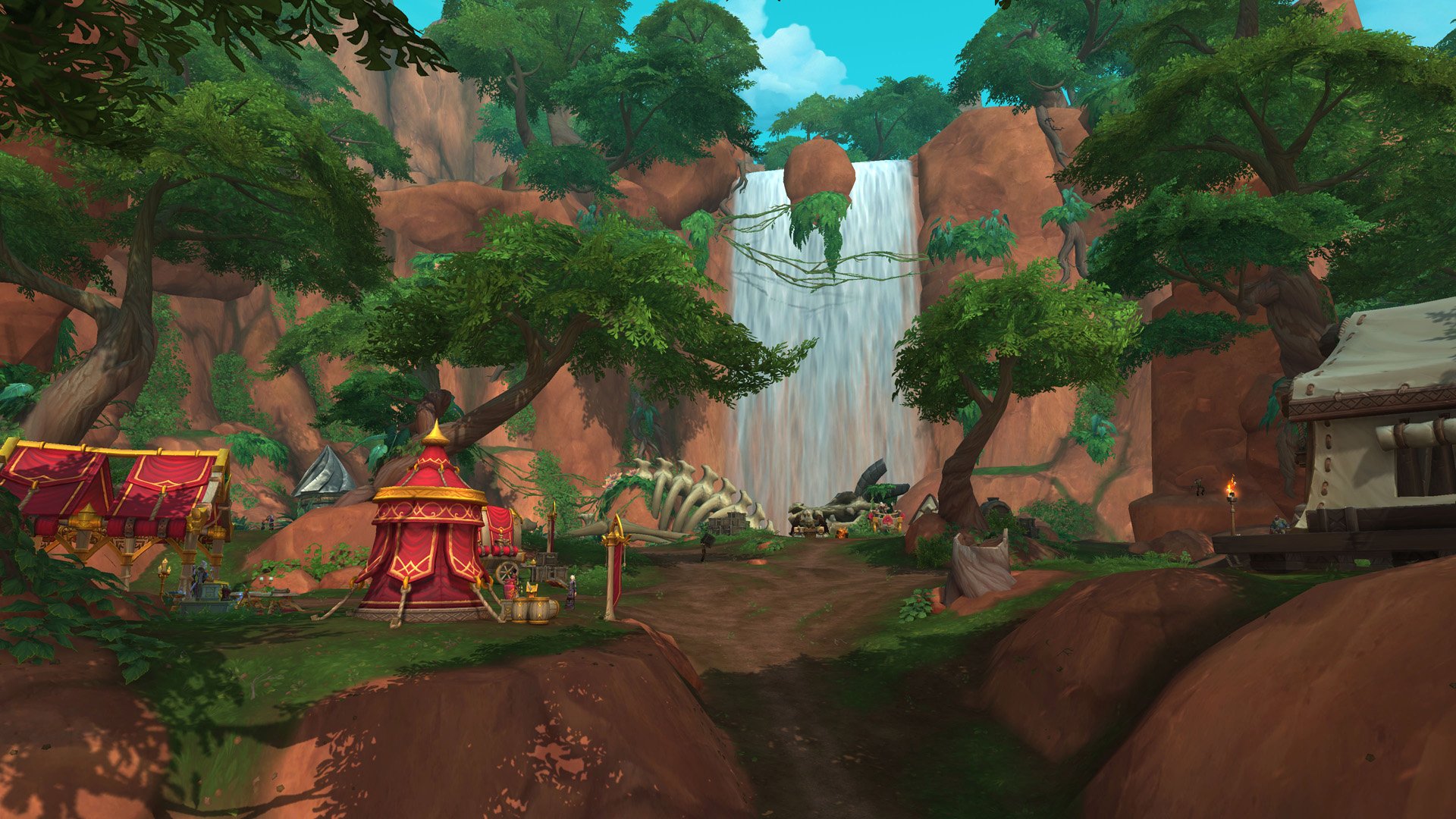 Described as a “wild, untamed land waking up around you,” the Waking Shores is where we start our journey through the Dragon Isles. A joint expeditionary effort — yes, between Horde and Alliance — will set out from the capital cities of Stormwind and Orgrimmar. En route to the Dragon Isles, you’ll get the unique chance to hop between the faction boats, causing all sorts of PVP havoc. If you’re a War Mode player but get tired of this experience, the landing site in Waking Shores will have an innkeeper available so that you can turn War Mode off on arrival.

As protectors and nurturers of life, the Red Dragonflight guides us through this initial zone as we battle lava-flinging Elementals and Proto Dragons divebombing for prey amongst our allies. And, of course, the cruelest foe of all — ducks. 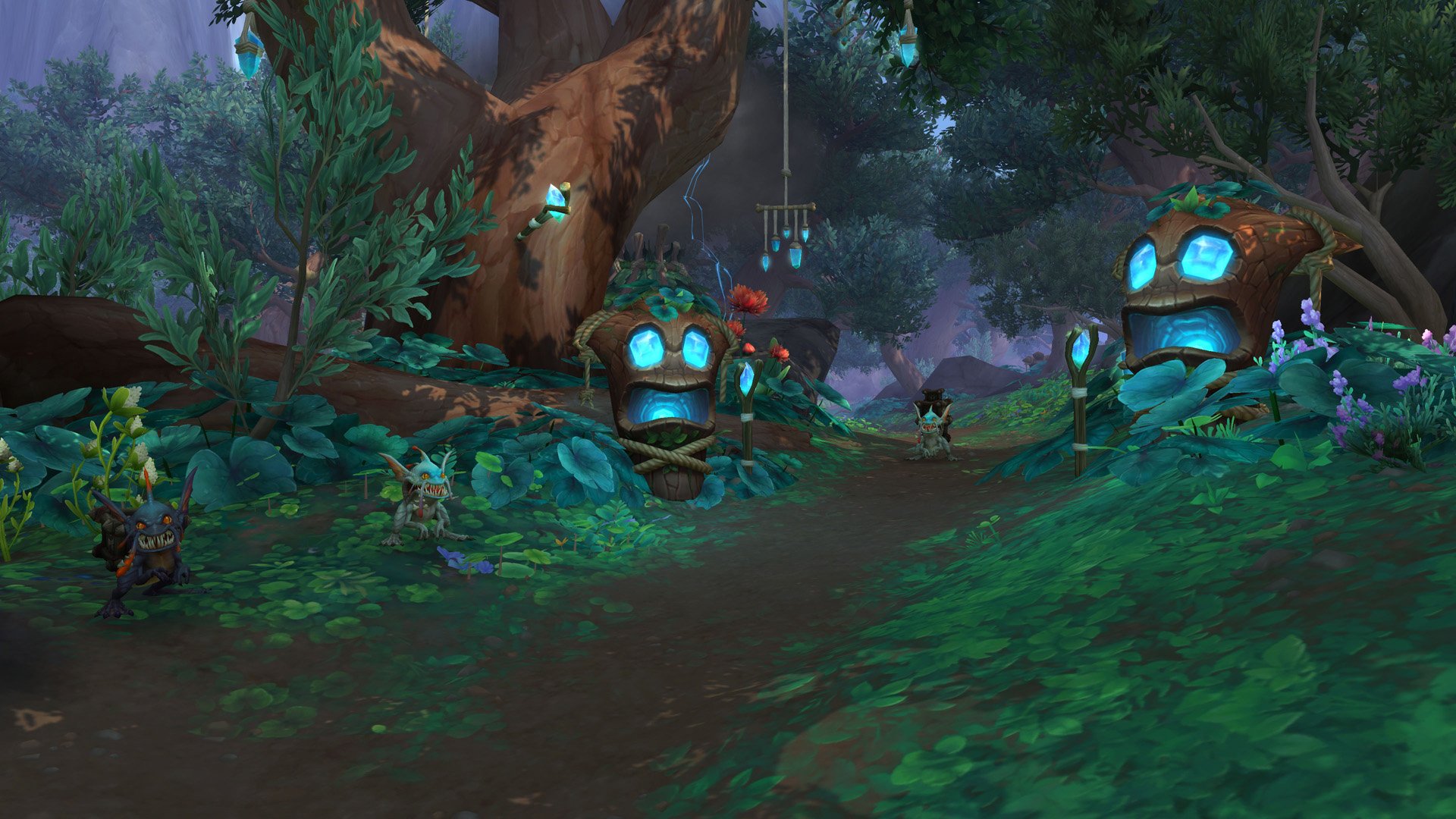 Evoking memories of Nagrand from the Burning Crusade, the Ohn’ahran Plains is an open zone where “the horizon tells the story.” The Wild God of the Wind Ohn’ahra lends her name to the region — Hunters encountered Ohn’ahra in Spirit Eagle form during Legion while seeking the Talonclaw legendary.

There are two main factions in the zone — Centaurs, who control the open plains, and the Green Dragonflight, who rule the groves. Unlike all previous experiences with the race, we will be earning the trust of the Centaurs during the story’s progression. 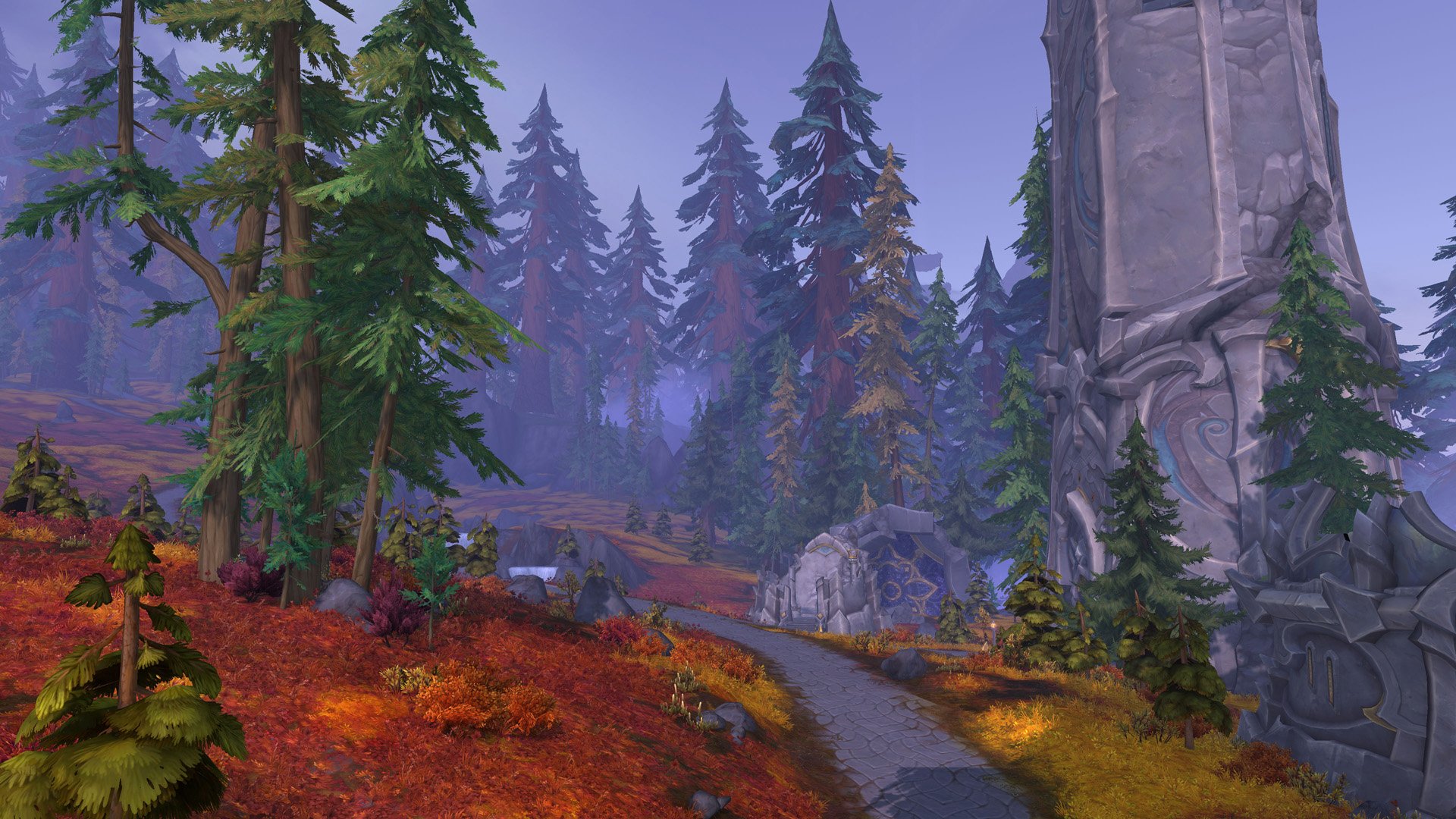 Our third zone to adventure through, the initial influence behind the Azure Span was Grizzly Hills from Wrath of the Lich King. Touted as a “giant zone with a lot of surprises,” the Span will start as a forested space interspersed with draconic ruins, moving into another elevation to discover a vast elevated tundra with snow, frozen rivers, and huge icy waterfalls.

We’ll encounter gnolls and furbolgs in our Span adventuring, but this is also where we get to revisit the Tuskarr (also last seen in Wrath). We fight alongside both the Tuskarr and Blue Dragonflight in the Azure Span, following the story of Kalecgos (who’s received a bit of a glow-up) as he dives into Sindragosa’s archives. Fun side note: the announcement roundtable theorized this might be the largest individual zone in the MMO to date! 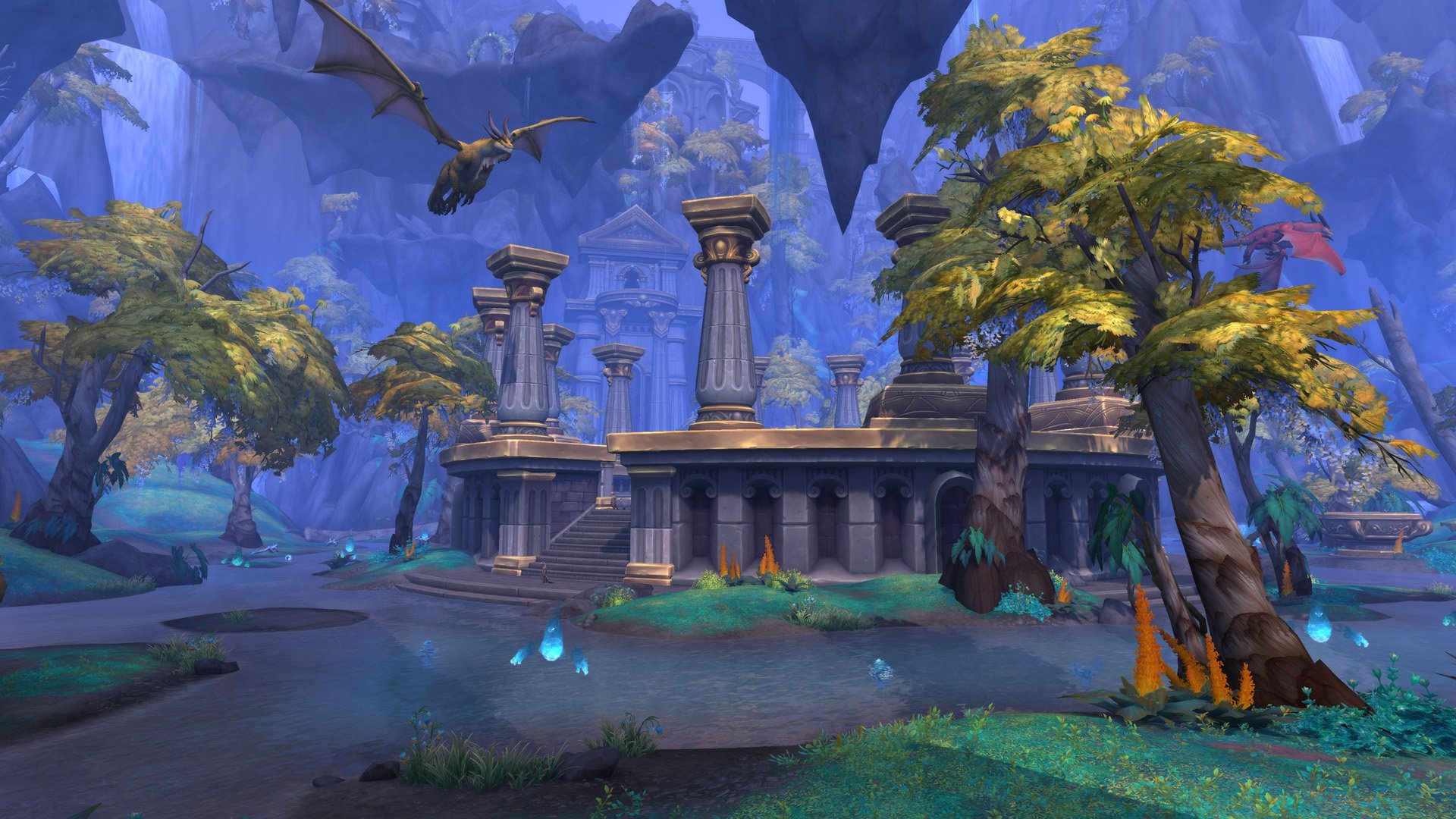 Welcome to Thaldraszus, home of the dragons, the seat of power for all five dragonflights — and our fourth zone. We’ll explore huge vertical mountains, cave systems throughout the area, and a subregion for the Bronze Dragonflight. Unlike the first three zones, Thaldraszus houses fully intact buildings, while the rest of the Isles feature a lot of ruins — think similar to Suramar’s buildings versus the rest of the Broken Isles.

Thaldraszus also features the expansion’s hub city of Valdrakken and Tyrhold (which we saw highlighted in the cinematic). Valdrakken epitomizes “the dragons’ efforts to put together what city would look like.” For instance, we’ll encounter a public library from the blue dragons and gardens from the red and green dragons. And don’t worry players — this time, we’ll have an auction house available to us, no portals required. On the flip side, Tyrhold is a “titan technological marvel” and the preserved titan facility featured in the announcement cinematic. Named for and built by the titan keeper Tyr, all dragons revere him for his help when dragon aspects fought Galakrond, but the devs were clear to note a lot has happened in the last 10,000 years since the closing of the Isles. And we’ve certainly never had problems with titan facilities in the past. 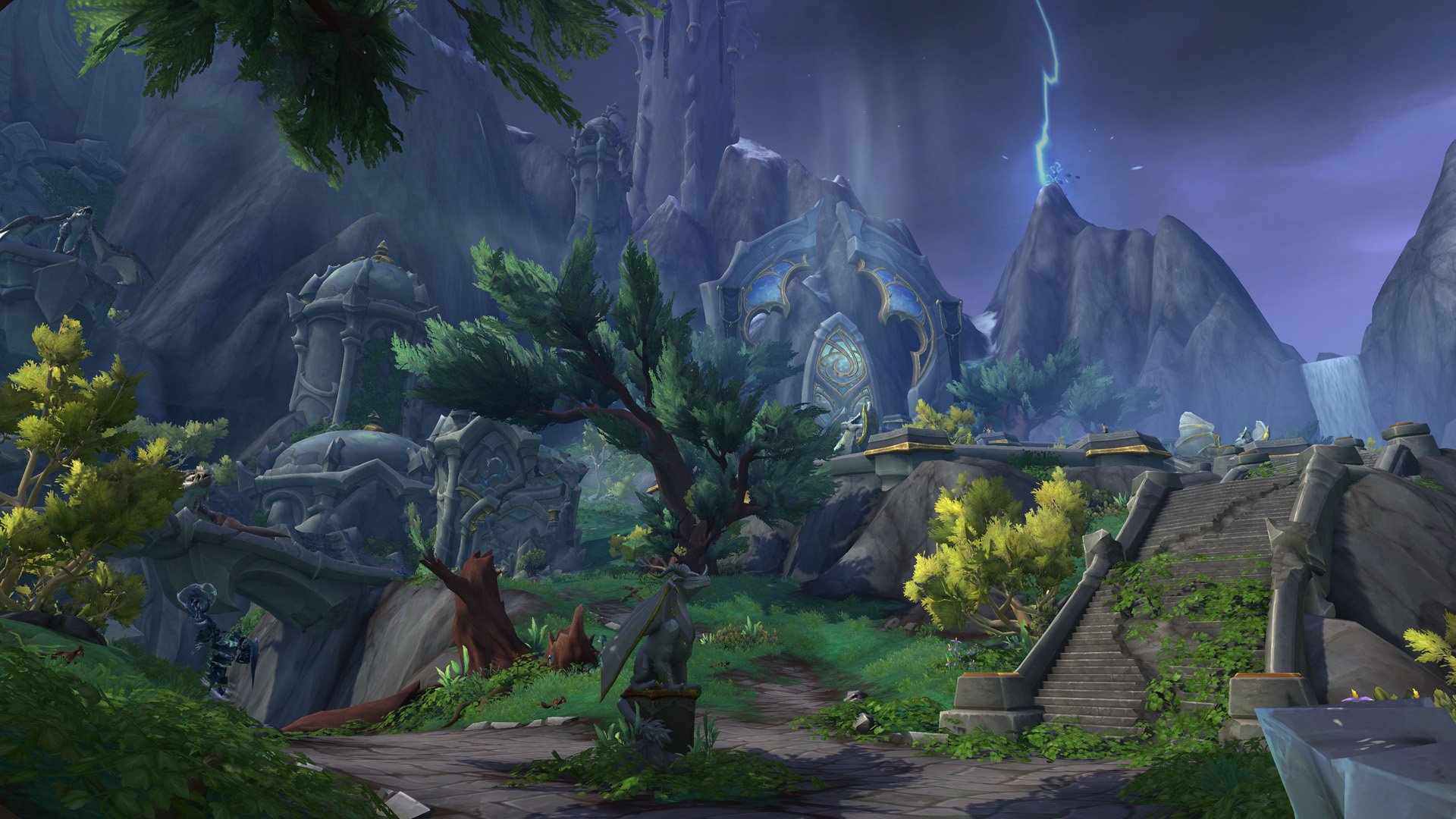 The final new zone isn’t actually in the main story loop. The Forbidden Reach is the new Dracthyr starting area, an island off the coast of the central Dragon Isles. The Earthwarder Neltharion crafted this area to train his new armies of Dracthyr in isolation. Unfortunately, the devs didn’t explore this region in the initial announcement event. Still, flavor text on the expansion’s website explains that forces abandoned the island following a terrible battle — perhaps between Dracthyr factions. The Dracthyr are only awakening now due to the “return of an ancient enemy,” perhaps the expansion’s big bad?

Obviously, we’ve got a lot to learn in the coming months, and we don’t have a release date yet for Dragonflight. But with Dracthyr Evokers, Dragonriding, UI reworks, and the return of talent trees, you can bet there will be plenty to test, so go opt into the future beta, and we’ll see you in the Dragon Isles.