How could World of Warcraft transmog be improved? 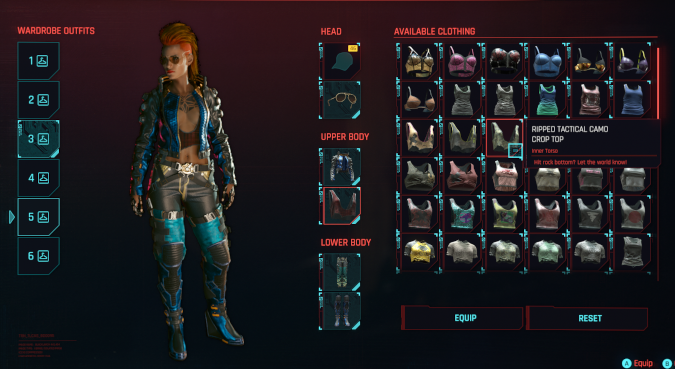 Whenever a transmog system is introduced into one of the many games I play, I immediately look at it and debate whether or not it would be a good fit for World of Warcraft, the game that taught me how much I love transmog. Back when Diablo 3 came out in 2012, I remember wishing Blizzard would port that game’s wardrobe system into WoW, and while they didn’t exactly do that, they did create a robust way to make sure players could keep hold of their item appearances for later use in its own version of the wardrobe.

Games like Assassin’s Creed Odyssey and Destiny 2 have had elements I’ve wanted WoW to steal for a long time now, and while I’ve never played Final Fantasy XIV — or if I have, I’ve forgotten it, which is very on brand for me — I have seen enough of its Glamour system to know it’s pretty interesting all told. And in the past week, I’ve come to love the variety of new customization options, including a wardrobe system, added to Cyberpunk 2077.

The ability to switch between up to six presets on the fly, without any in game cost or having to go back to your in-game wardrobe in your various apartments is amazing to me. While I can’t customize the loadouts anywhere except in my apartments, I can build them in advance and switch between them whenever I want, even in the midst of combat. There’s a lot of flexibility in terms of transmog looks, too, with no class-based restrictions or in-game money cost. If I want to look ridiculous, I can, and the quality of the item doesn’t matter either. Iconic legendary, epic, rare, doesn’t matter, I can put it in my transmog.

Best of all? The transmogs are linked to your character, not their gear. I can switch gear all day, and it won’t change my mog, something WoW should pilfer like an excitable raccoon in an orchard.

So what do you think would improve World of Warcraft tramsmog? Armor dyes? More presets? How would you make transmog better?